Yep, it's time for a braindump!

And yep, I miiiiiiiight have slacked this month because I woke up this morning and realised that it's the 31st and a Sunday, and I hadn't gone off at multiple tangents this whole month! Why, you ask? Because things have been a little...(insert German word for "so crazy that my upper left eyelid twitch swept my husband off the bed in the middle of the night while I sat staring at my laptop"). Oh, and the amount of time I have been spending in that closet of ours. Last week, I read somewhere that the term "luxury" really has nothing to do with actually indulging in "expensive" extravaganza but in doing just little things that lift your mood and make you feel excited about your surroundings. For example, lighting a candle. So guess who lit a fucking candle in her closet and choked on the scent of French lavender? You can't see it right now but I'm raising my hand, waiting for divine intervention. Halp me, God! Oh, wait. A certain somebody once left me a comment saying that "only God can help you now" or "even God can't help you now" (I can't remember which) so I guess that plea was in vain. Well sucks to be me, doesn't it?

Wow, I'm on fire today! You know why? Because the cycle of my brain to take a dump coincided with that of my uterus. Now go back and read the title of this post. And to think that that was NOT intentional! Oh, fun times.

So here's the deal. This month has by far been the busiest in my "adult" life because I believe that no adult usually endures the struggles and stress-levels of a teenage girl in an Indian household. Because a teenage girl in an Indian household has to deal with a) poor self-esteem (her other teenage friends/classmates try to over-compensate for their lack of self-esteem by commenting on her short-comings) b) exam stress (didn't you KNOW that you were supposed to start preparing for your Boards from grade 5?) c) boy-trouble (a "protective" Indian boyfriend ought to tell you what to wear) and d) nosy relatives (who either want to know how much you plan to score in your Board exams two years from now or when you will settle down and marry a non-smoking, non-drinking, "God fearing" boy from a nice family). So, no. Whatever troubles you have now are NOTHING in comparison to that of a teenage Indian girl who attends 10 tuition classes 6 days a week on top of attending regular school and listening to her classmate reading her palm only to predict that she'll be poor in the future.

So, as I was saying, this month has been the busiest in my adult life. And what made it even more crazy is the fact that I squeezed in three holidays, all just two weeks apart. First, I went camping in the beginning of the month and learned all about sheep poop. Then, I went to London on a whim because Punchy. No explanation needed when it comes to Punchy. And third, wait. I obviously don't know how to count. The third and biggest holiday is not planned for this month but for next month. Which starts tomorrow. And we're leaving day after so I'm going to let that justify my confusion. The point is, this third holiday is also one week after the previous one (I really, REALLY don't know how to count) and I'm not so sure if I'm feeling sane right now. This holiday is one that The Husband and I have been planning with The Bromance for months now. The planning has been so intense that The Husband was seen slapping himself in the face out of excitement a few months ago. I even have an unpublished post titled "A post I started writing on June 2nd..." where I recorded some of the peculiar behaviours of a certain member of the strange species that I purposely chose to spend the rest of my life with. Because you tell me this, dear reader, just how many people do you personally know of who slap themselves across the face the minute something goes wrong? Thought so.

The good news is that we're prepared and have everything we need. Obsessive list making has ensured that we have everything we need. But the bad news is that it's all over the place (I can feel my mother nodding her head in disappointment...I have failed her). There's stuff in the bedroom, living room, CLOSET, kitchen, in a box at The Husband's office, and some of it just came out of the laundry and is drying on a rack because instructions say that they shouldn't be shoved into a dryer and just this once, imma gonna follow them instructions. They're the only things that bring order into my life right now so I'm going to follow label care instructions. This is my life now.

Apart from that, we've pretty much emptied our fridge, mostly by feeding leftover ham slices and lettuce to the one who eats all leftovers in the Shankita household a.k.a The Husband. And we've...yeah, that's all we've done so far. Oh man, this is going to be fun! But in other news we went to the cat cafe yesterday because obviously, entertaining fat cats who really don't give a shit about you is more important than packing for your 21 day trip.

So guess who accompanied The Husband and The Bromance to the cat cafe this weekend ? 😑 I'm sure I'm still not a "cat person" but some of them were admirable. Especially the fat ones. Fat cats are cool. #catsofinstagram #notacatperson #catcafe

And on our way there, The Husband walked straight towards this car that was stopping in front of our house. He first went to the front of the car and checked the license plate and then opened the back door while the guy in the driver's seat started visibly shaking and nodding his head, trying to say the words "I'm not...I'm not...ubbb...ubbbbb...ubbbber". I'm sure he would have completed his sentence without stammering had he not been intimidated by the big brown man in a black shirt with a thick beard and bored expression on his face, who was not only approaching his vehicle with intention but also attempting to get into his back seat. As The Bromance said, "Had he done this in America, he would have been shot dead by now.". #truestory

I was right behind him when this happened and even wondered why The Husband was forcing himself into the back seat of a car that didn't have "Pre-paid hires only" or "Uber" or "Taxi" written anywhere on it. But I couldn't be bothered to stop him. It was just too funny. The best part was when we realised that our Uber was waiting right behind this car and our driver was also shaking visibly...from laughter. Fun times. I still can't get over the fact that he actually checked the license plate before creeping that poor man out of his skull.

On that note, I bid goodbye to July. It's been a crazy month. But aren't they simply the best kind?

Post image courtesy: Ms Punchy. She clicked it while I was washing my face on my last day with her and sent it to The Husband. And true love is his response to that picture of me looking like the Spawn of Satan. 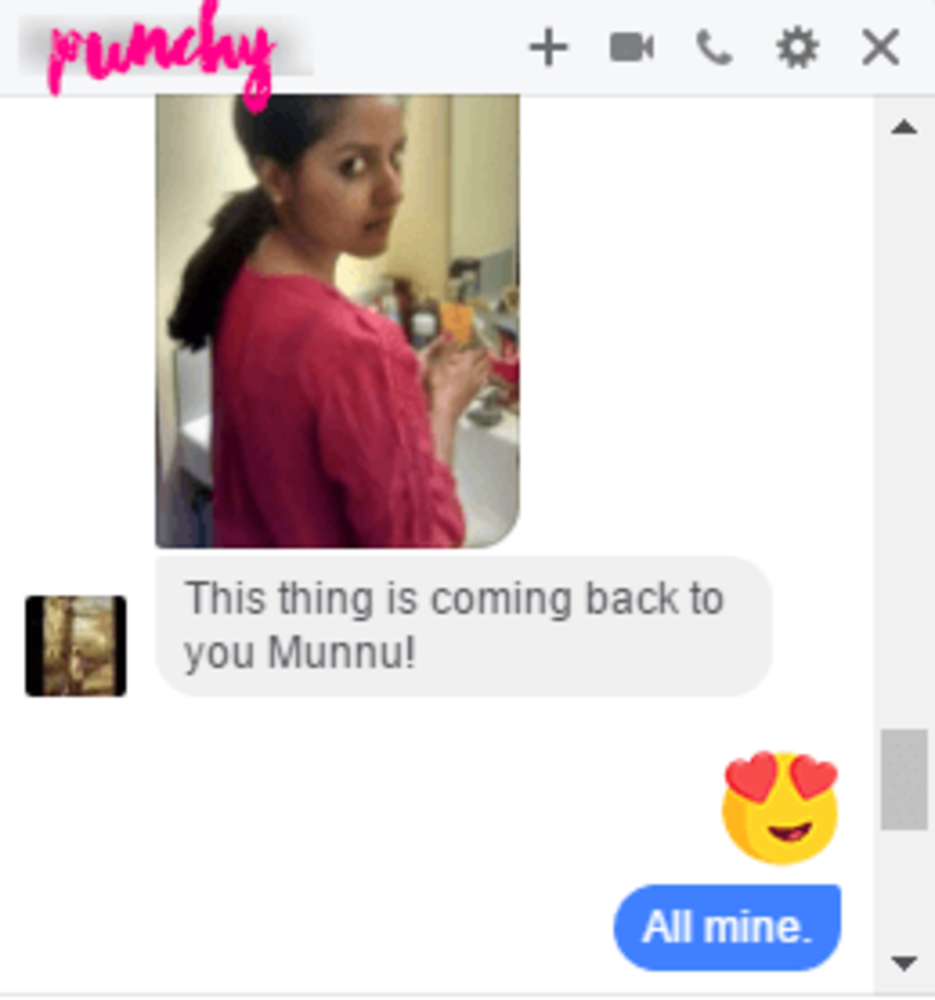 Did I mention that true love baffles me?