I can't really put a finger on when Shane's vision started getting affected by the continuous days he spent staring at his laptop screen in bed from the time he was about seventeen. I'm not exaggerating in the least when I say that he would go for days without food and sleep, staring at TV shows or movies on the right side of his screen with his right eye and at code on the left side of his screen with his left eye. At least that's what I imagine he does even today when I find him in his characteristic pose in bed, balancing his neck on a pillow folded in half and his laptop on his chest, with the screen a tad bit too close to his face. The difference today - he is occasionally interrupted by his job that requires him to get out of bed and make his way to a desk where (I am told) he can stare at not one, but three screens at once. Oh, and he has also been the proud owner of a pair of spectacles that have essentially become an extension of his body since late 2015. He showers with them, falls asleep with them, drops them into his dinner while cooking, and sometimes drops his phone on them while reading in bed.

I distinctly remember him complaining about his vision sometime towards the end of 2014 when we got engaged. In the two months that he spent in India following that, I tried my best to drag him to an ophthalmologist to get his eyes tested. As you can imagine, my efforts were in vain because have you met Shane? Or have you met a mule? Essentially the same thing.

2015, when we moved into our first home together, is when we felt like adults for the first time in our lives. What made us feel settled in life was the purchase of our first 50" TV and PS4. Soon after that, we got ourselves a PC that we attached to our TV and by then, we were mentally getting ready for retirement. Adulting can be tiring sometimes.

What followed were more days of screentime for Shane, although this time, at a seemingly safe distance from the screen itself. So you can imagine my concern when I woke up one morning to find him perched on our couch that had been dragged all the way to the TV such that the only thing coming in the way of his romance with the screen was a three-foot wide coffee table that he needed while gaming all night.

When I asked him what he was doing, he casually told me that he couldn't see anything from the distance at which the couch is usually situated. Now, that makes it sound like we have a living room the size of a football field with a well-dressed butler in the corner asking him if sire would desire some refreshments, but nuh-uh. This ain't no Downtown Abbey. We live in a rat hole.

When it became a routine chore for me to push the couch all the way back to the wall (where it's supposed to be situated) every time we had guests over or even when I wanted to watch TV like a normal human being, I started the nagging. The minute I'd spot him with his face pressed against the screen, I'd mention the much-needed eye-test. And ladies and gentlemen, after three months (!) of nagging, he finally agreed to get his eyes tested. Not because nagging always works although I'd like to take full credit here, but because he was finding it hard to see things at a distance on his daily walk to and from work. And in a country where it gets dark by 3:30 pm during winter, not being able to see oncoming traffic from a distance is not exactly ideal.

Getting him his glasses fixed a lot of things in our lives. For one, my back was doing a lot better owing to not having to push the couch back to its original place every morning. Then there's that little thing about my husband not getting killed by the ninja cyclists in this city. You never see them coming until the last second and if you're too late to move out of the cycle lane on the footpath, you get a free first class ride on the handlebar of the bike until the rider notices you there. It's especially hard to get noticed when you're as tiny as I am, but I digress.

All was hunky-dory by the end of 2015, all through 2016 and 17, and up until we returned from India in the beginning of 2018. Because that's when, just about a month ago, I woke up one morning to find our couch...displaced. This time, he told me that he couldn't see things on the screen as clearly as he'd like to although it was not even close to being as bad as it was two and a half years ago. "In fact," he went on to elaborate, "it's just this particular game that needs me to read itty bitty details on the screen otherwise I would have never moved the couch forward."

He was clearly panicking. Why the hell else would he ever justify moving the couch forward or even sound like he was apologetic about it? He was quite obviously mortified that I was going to start nagging him about an eye-test again. But little did he know that I had different plans this time. This time, I was so gonna take all the credit and finally bag my gold star in this department. And sometimes, when you set your mind to something, everything just works out to make things happen in your favour. (Insert: a whole big tangent about The Universe and The Secret.)

So a few days after I decided that we were getting his eyes tested, his optical group sent us a mail saying that he was due for his next FREE check-up and within minutes of opening that mail, I got him an appointment on a weekend when I knew he had nothing better to do than place his face dangerously close to a screen for hours at length.

I sent him the appointment confirmation only on the day before and told him that canceling on a Sunday, the day of Sabbath, meant that business would be terrible for the guys at the optical centre for the rest of the week and surely, we didn't want them to suffer due to our deeds? I can't think why he didn't buy that explanation but he did take pity on me for going to all these lengths to trick him into an eye-test. And thus, the Sunday before last, we found out that Shane's power in both eyes had indeed increased along the normal range, that he would be requiring a new pair of glasses (lenses, in the least) and that we could end up spending a couple of hundred pounds extra if we chose to get him new frames as well. At that point, he looked at me like this was all my fault. If I hadn't dragged him here, we wouldn't be spending all this extra money!

"But the consultation was FREE. And you don't have to get new frames, the old ones work just fine. Plus they're loyal and have survived all these years of abuse!", I remarked.

So he let me off the hook. I did have a point, he said. And since he couldn't blame me for anything anymore, he went ahead and spent a couple of hundred pounds on new frames because someone told him that he could get two frames for the price of one (very expensive frame) and that he could turn the extra one into sunglasses that would come with his power on them. You really have to be born with a different genetic and racial makeup to resist an offer like that because no Indian would.

And my gold star?

These frames that I found in the men's section while scouting for new ones for Shane. 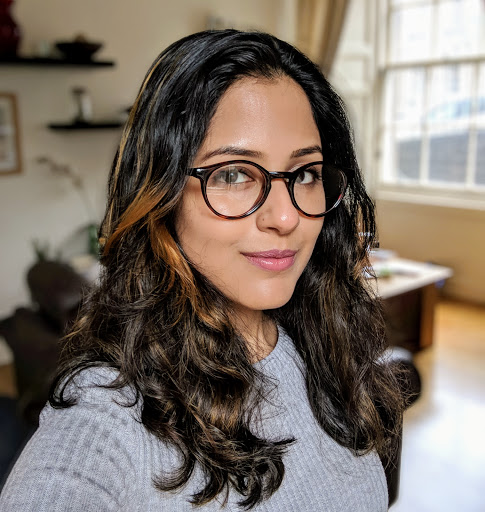 There was only one of these left and the minute I laid my eyes on them, I knew they were brought into this world just for me. I admit that we had to dump a couple of extra pounds to the hundreds we were already spending on Shane's frames, especially after I stood in the middle of the store with these perched on my nose, price tag and all, yelling at everyone that Oh My God, don't I just look like an absolute goddess? Clearly, business was doing well for those guys because we didn't cancel on the Sabbath but in my defense, they were totally worth it.

Did I need them? Not really. I have 20/20 vision that I inherited from my fighter pilot dad.

Would I have died if I left the store without them? Metaphorically, yes.

And what genetic/racial makeup do you need to be an overall piece of shit like me?