Shane and I had been dating for about nine months by then, mostly long distance, meeting only a couple of times during the summer holidays of 2011. But by then, I knew that I was quite madly and hopelessly in love with this boy.

I know. Major cringe. I want to look away from my computer screen and barf into my shirt sleeves too. Our future kids are going to look away from whatever screens they'll be using in the future when we finally have flying cars, and they will barf into futuristic receptacles too. So you're not alone in feeling nauseated by my corniness. Although you have been warned - there's a lot more where this comes from.

On Feb 14, 2012, we were about to celebrate our first Valentine's Day since we started dating. And because we were newly in love and because people get impulsive when they're newly in love, to mark this occasion, Shane bought flight tickets to India such that he would land in Trivandrum on Valentine's day. I was the only one who knew that he was boarding that flight and looking back, I'm not sure I enjoyed being in that privileged position because JESUS CHRIST what if something had gone wrong?

Anyway, I still remember the scene he described to me when he walked into his parents' house - his brother had been really sick and was hiding the fact from his parents and by the time they found out, his condition had gotten a lot worse. So his parents were standing in his room, scolding him for not telling them how sick he was, when Shane barged in and yelled, "Yeah, you idiot! Are you trying to get yourself killed?"

It was good for him that his parents were a bit pre-occupied with his brother who looked like he was going to pass out because otherwise, they would have had time to consider why their younger son whose education abroad they were funding, had jumped on an expensive flight to India when he should have been in class. Little they did they know that he never went to class anyway but I'm sure it didn't even cross their minds that he had landed on Valentine's Day, possibly to meet his wee girlfriend.

That afternoon, I arranged with a couple of friends to throw Shane a small welcome home party at a local restaurant we liked and told him that I wouldn't be able to meet him until much later. A friend picked him up and brought him there and my first memory of seeing him was the way he was squinting at me because he couldn't believe I was standing right in front of him. Turns out, I'm a very convincing liar. Also, in all my excitement of meeting him in a way he least expected, I forgot to get him a gift so I stood there like I was the gift.

My friend Steffy's youngest sister had even brought a hand-drawn card for Shane which was the cutest thing ever. It was like she was trying to making up for the embarrassment that I was. That's her with our friend Shijin... 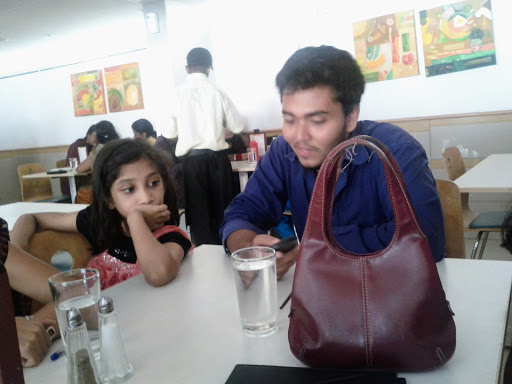 ...who later made this amazing video for us on our wedding...

...where he literally got us wedding wishes and blessings from all over the world. We're so very lucky to have friends like him!

And that's an almost twenty-year-old Shane with the hand-made card I mentioned earlier: 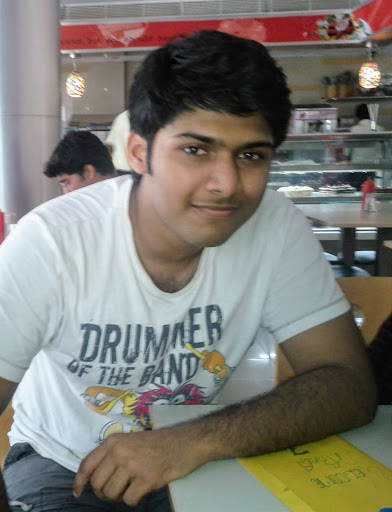 I say almost twenty-year-old because his birthday falls exactly a week from Valentine's day every year, same as my mother. And also because most people find him nearly unrecognizable in these photos, I wonder why.

While all this was going on, my parents had no idea that Shane was in town. They knew that I was meeting my friends for lunch on Valentine's Day, they knew I was dating Shane, and they were very comfortable with the idea of me dating a boy who was in faraway England.

This was also around the time when I started telling them how serious things were getting; that sure, I was just twenty years old but I knew in my gut that he was the one; that he was the sweetest, kindest boy I had ever met and that I got along with him much better than I did with most human beings. As it turned out, not only was I a really convincing liar but my parents weren't shocked at all by my revelation that I was not one to make friends easily.

When he booked his flight to India, I was aware that he was not only going to be with me on our first Valentine's Day together, but he was also going to be in town to celebrate his first birthday after we started dating. As you can imagine, I wanted to do something special for him and it was with this first birthday that I started the tradition of writing him those long birthday love letters. But that wasn't all. I thought that it was finally time to bring all my favorite people together in one room to celebrate a special day that two of them shared.

I asked Shane if he would like to meet my parents as my boyfriend and as usual, he was game. And as usual, I didn't tell my parents a thing because that's how we Indian kids roll. Instead, I hatched up a plan for him to drop in unannounced on his birthday with a gift for my mother and pretend as if he'd just landed on that very day. A volatile plan that could have gone either way but something made me take the chance.

The day before executing our master plan, I met up with him to help him select a birthday gift for my mum. We went for a traditional box of chocolates and a nice card but just before exiting the store, because it had been Valentine's just a week ago, I noticed some Valentine's gifts that were still on display. I stopped there for a minute to browse the shelves and casually pointed out a coffee mug that I thought was cute.

The next afternoon, he arrived at my doorstep with not only the birthday gifts for my mum but also a shit ton of belated Valentine's Day gifts for me, including but not restricted to that very coffee mug that I had picked out at the store. I still wonder if my mum thought it was weird for someone to bring more gifts for me on her birthday. I'm sure I'll find out soon when she calls me after reading this post because with all the new revelations here, right about now, I can picture my dad getting up, walking away from his computer, resting his head against a wall and counting to ten very slowly.

Anyway, all went well with my parents that day and it was nice knowing that I could trust them to treat a boy I liked so well. He stayed over for dinner, everyone got along, and I was over the moon with happiness.

Fast-forward to six years later: Last night as we were curled up in bed, I asked Shane, "Six years ago, if someone had told you on our first Valentine's together that this was how our life would turn out to be, would you have believed them?"

And when he took a whole six seconds to peel his eyes off his screen and distractedly ask me, "Huh? Wha-?", I sat up in bed and recounted this entire story to him.

Shane, predictably, had no proper recollection of these events except for bits and pieces here and there but in the end, he pointed out how I do indeed write extensively about him online. 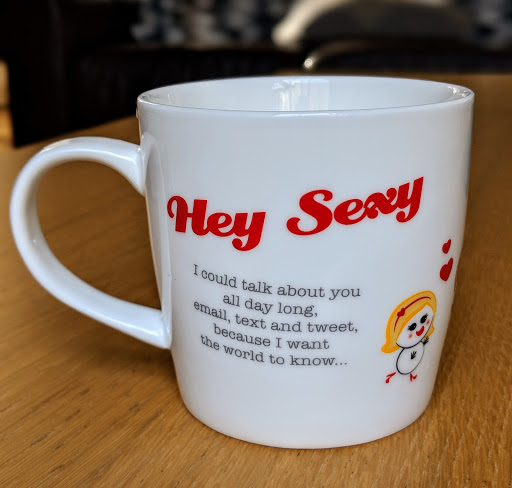 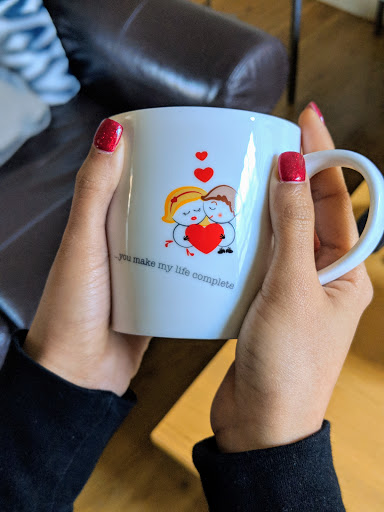 Because that ⬆️ is the mug I unknowingly selected for myself on our first Valentine's Day together.

Happy Valentine's Day, my love! I will continue emailing, texting, tweeting and blogging about you for the next six years and more because you do indeed make my life complete.