In yesterday's post where I shared the story of our first Valentine's Day together, I mentioned two things:

When we were in India a month ago, we found that very first letter I'd written to him. It was three pages long (front and back) and it was attached to a very inappropriate birthday card that his parents later read and saved for our embarrassment. And one of the things I said in that letter was that I'd celebrate his birthday and Valentine's day together from then on and that it would be a week-long celebration leading up to his birthday.

It's very easy to make such hefty promises when a) you're drunk on either love or alcohol b) you actually live in close proximity to each other and c) you're unmarried.

I surely ticked all three of those boxes when I wrote that letter but once he returned to his studies in the UK and by the time we'd been together for another year, I wasn't drunk anymore - just plainly and routinely in love; I was 5000 miles away from him and video-calling him daily based on our five-hour time difference; but we still remained unmarried, I'll give you that.

Two more years of long-distancing later, we were married. I'm now reminded of those "pick two" triangle diagrams that show you that you can only have two of the three options at any given time. When we got married, we were in very close proximity to each other at all times but again, not drunk anymore and most definitely not unmarried.

From my observation these past (almost) three years, there's another layer added to your relationship when you get married. It's intimate on a level that now, you discuss and deal with your finances together, make adulting choices together, split chores in a more structured manner, and sometimes fail to even notice your spouse who very easily begins to blend in with the furniture.

So when I re-read that first letter I wrote to him after almost seven years of growing and maturing into this relationship, I felt so ashamed that I wanted to break up with myself. I finally had the chance to try and live up to that promise but I'd totally forgotten all about it in the past two years. But you learn as you grow, you make mistakes, you repent, you break promises and renew your vows.

So ladies and gentlemen, this year and hopefully for the rest of time, I will try my best to celebrate One Week of Shane, starting from Valentine's Day to his birthday.

The poor sucker has no idea what's in store for him this year and over here, I will document his reactions when my love hits him in the face like the lid of a titanium coffin. BOOM!

To kick things off, this morning I, the one in our relationship who does not voluntarily cook on her own to save her life, made him three of his four favourite breakfasts in the world and set them up in bed for him first thing in the morning. 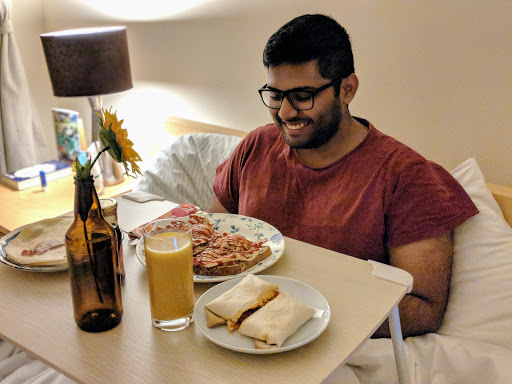 I also got him this foldable bed table as a surprise because he's been eyeing this for a while now and it helps him tremendously with his posture while editing podcast episodes from our living room (which he did all night yesterday) and generally working in bed.

I have a whole other story about this table and the breakfast that I will share later this day but before I sign off, let me show you this pic: 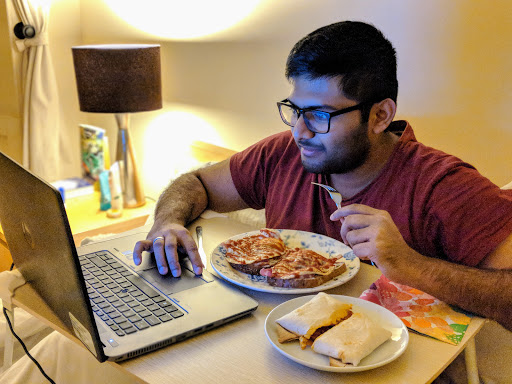 The table not only fits three breakfasts but also his gigantic laptop. And that face you see there? That's the face of a very happy man.

This was Day 1 of 7. I will be sharing his reactions to little surprises every day until the 21st. Some of the posts might go up much later in the day but stay tuned :)