I think I may have purchased the last piece available of the foldable bed table thingy I got Shane this week because when I went back to my order history to find it, I was greeted with an entirely different design. I wanted to link the table here so that I could recommend it to you, but looks like that would be a futile exercise under the circumstances. So instead, I'm going to tell you the story of how it got delivered and how I panicked for a for a couple of hours before and after I got it.

From the time we've been married, Shane and I have ended up using just his Amazon account for placing all kinds of orders because a) as an Amazon employee, he gets a significant discount and b) he has Amazon Prime and I never got around to setting it up for myself.

The problem is, every time I buy something for him, I have to consciously remind myself to not even search for the item on his Amazon account lest suggestions of similar products showed up on his feed and ruined the surprise for him. Now, my Amazon account was created in my first few days in this country and I can't rmemeber what exactly happened then, but mobile number I gave for my account was Shane's. Maybe I didn't have a number just yet or maybe I was just a very stupid person but that's how it has been for a very long time. So whenever Amazon shipped my items not only did they send out an email notification, but they also sent out a text to the number given in the profile. You see where I'm going with this?

Apparently this has been happening every single time but I only found out two days ago. Because two days before this morning's surprise, for the first time ever, I got forwarded a text from Shane with the date and time of the delivery and I thought it was over. Now that he knew there had been a delivery, he was going to come home and ask me what we'd ordered.

...he pulled a classic Shane and forgot all about it. Seriously, what were the odds that he'd just mechanically forwarded a message to me without completely registering the fact that something was getting delivered to the house that day? Turns out, they were pretty great and it was pretty non-stupid of me to bet on them because that evening, when he came home, Shane had zero recollection of the text confirmation.

Also, lesson learned. Always check whose mobile number you're entering somewhere - be ye not so stupid.

For a person who insists upon pulling out the measuring tape even while ordering a simple frying pan off the internet, it was quite peculiar of me to place an order for something with the words 'TABLE' and 'EXTRA LARGE SIZE' on it without even once glancing at the dimensions. Like I said, I'm probably not a very smart person.

When the thing arrived, I nearly fainted because I was struggling to even carry it into the hall. The poor delivery guy took pity on me and placed it in the hallway for me before leaving. Because that thing? It was this big: 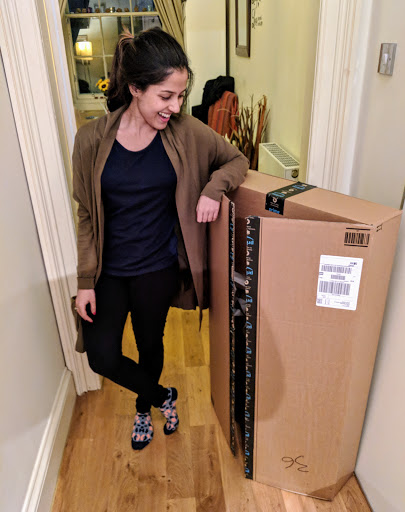 Thankfully though, that was the extra outer packaging by Amazon that made it look that ginormous. The real thing was more manageable: 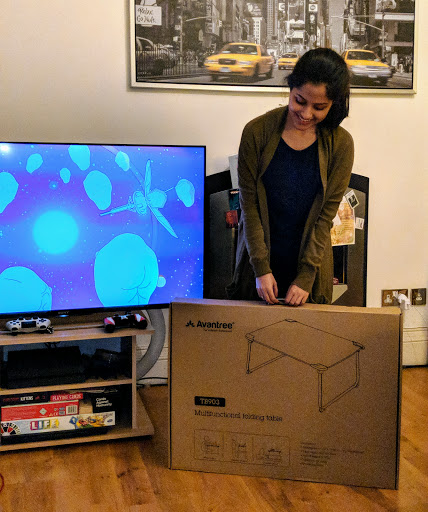 And yes, that's a butt on the TV screen.

Recycling day was a whole week away so until then, I had to figure out a way to hide all these boxes around the house without Shane noticing them. The actual box for the table could easily be slipped under our bed, a place where I was sure Shane was never going to look. The big box, on the other hand, posed quite the challenge.

Our apartment is already very tiny, with whatever storage space we have in the laundry room being taken up by extra rolls of toilet paper, a couple of suitcases and backpacks, extra lamps and cleaning products that came with this house (that we don't use), two laundry baskets, a washing machine, a freezer and our own cleaning devices which are aplenty.

This big box wouldn't fit under the bed because it was too thick, it wouldn't fit under our couch for the same reason, and for a minute there, I even considered arranging it behind the TV and calculating the odds of an absent-minded Shane noticing a new decor item in the backgroud of his most familiar view. I soon abandoned that plan because it was obvious that even someone like Shane wouldn't not notice something that big peeping out, nay, staring at him from behind the TV.

And so, desperate times, desperate measures etc and off went the big box to the laundry room that didn't have any space left whatsoever. And since I've been throwing clichés around lately, I'm just gonna type this last one here: where there's a will, there's a way. You can hate me later.

If you ask me to reproduce the re-arrangements I made in our laundry room to get everything to fit but also for Shane to not notice anything strange, I'm not sure I'd be able to do it. But somehow, I managed to not only fit the box in there but also hide it to some extent by stacking one of the laundry baskets on top of the toilet paper rolls to cover it.

And then, I prayed that Shane would feel lazy to drop his laundry in the baskets for the next two days. That part went perfectly according to plan because he never complied to that rule anyway. There were dirty clothes all over the bathroom floor and I was happier for it.

Shane climbed into bed at close to 5 a.m this morning after having edited the latest episode of the podcast and he asked me to wake him up by 9 a.m to get to work. So I allowed myself an hour to cook his breakfast, feeling fully confident that I would just walk into the bedroom holding his tray full of food and wake him up to the smell of bacon.

My first instance of panic in the morning was when he woke up on his own before he was supposed to. I guess the smell of bacon got to him sooner than I expected especially since our kitchen is right outside our bedroom. He was surely surpirsed at the sight of me cooking so early in the morning and he told me later that after seeing the expression on my face, he took pity on me and decided not to come in to snoop. So he just picked up his laptop from the living room and climbed back into bed.

My second instance of panic was when I tried to lift the tray-table thingy after arranging all the food on it. 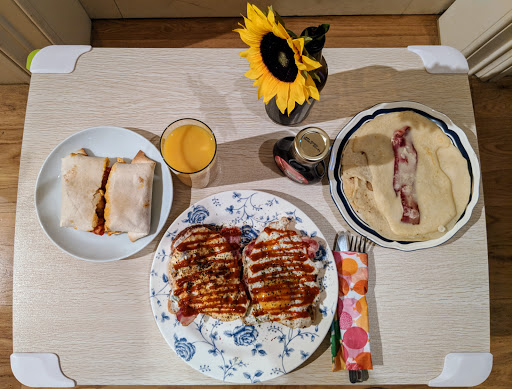 The table was literally as wide as our bedroom door and let's just say I'm not the strongest person out there. There was no way I was going to be able to open the door and usher in the smell of bacon to wake my husband up so instead (and Praise the Sweet Lawd Jeezus Christ Almightah for he was already awake!), I lifted the tray up for as long as I can do a side plank (it sure felt like it too) and called out to Shane to come open the door.

And maybe it was a good thing I did it this way because I got to see the most brilliant smile spread across his face as he quickly took the whole thing off my hands and proceeded to have his breakfast.

I think all the panic was totally worth it after all :)