After talking about The Crazy here, I think I want to go back and tell you about how it all started. I'm sure I've shared bits and pieces of this story here and there but never did I comprehensively address this.

When I was 11, while my best friend Madam Madan and I were desperately waiting for our Hogwarts acceptance letters, she sat down next to me in our school bus one morning and gave me "the talk". She explained everything to me systematically the way her mother, who was a doctor, explained things to her the previous evening. I understood the basics of what was in my body, what was bound to happen soon, and what was to be expected. I also realised for the first time that Preity Zinta and Saif Ali Khan had to have sex in the movie Kya Kehna for her to get pregnant. It was a relief to find out that one couldn't get pregnant simply by having a crush on a film star who didn't even know of one's existence. Because if that were the case, I'd have been popping out babies from the age of twelve.

The day I got "the talk" from my best friend, I skipped back home to share all my new-found knowledge with my mother. I explained to her what the period was, what sanitary napkins were really for, how babies were born etc. and my mother sat there nodding her head as if she was hearing all this for the first time in her life. If she, at that moment, had decided to pick up a pen and paper to take notes from me, I wouldn't have found that strange in the least. That was the extent of all period related conversations I had with my mom.

About a year later, I got my first period on a Wednesday which is the day on which my school prescribed white on white uniforms for all students. Thankfully, I'd noticed spotting that morning before school and knew that this could be my period. My mom ensured that I wouldn't stain my uniform while at school and sent me in without any fuss. That's one thing I'll always be grateful for - the lack of fuss in my home when it came to periods. When I returned from school that afternoon, my mother and I confirmed that I had in fact entered that phase of my life which would give me The Crazy.

Everyone was happy. My mum called up her family and friends to pass on the "good news", our domestic help fed me mithai, my grandmother presented me with money and gold, and someone even chastised me for sitting on my dad's lap while watching TV. Dad, in turn, asked me to ignore them.

That day also happened to be the very same best friend's birthday so, in the evening, I attended her birthday party. The next morning, against pleas from others who had heard of my "condition", my mum sent me off to school. Like I said, there was no fuss whatsoever.

For someone who is not aware of the usual fuss when a girl gets her period for the first time in most Indian homes, the calling up of relatives, feeding of mithai and the presenting of gold and money in my case would seem like a bit much. But did you know that in a lot of educated, urban middle class homes in India, girls are restricted from leaving the house at least the first time around, discouraged from taking a shower, prevented from touching men, pickles, plants or anything holy, forced to use rags instead of other sanitary products, and called "impure" while they're on their periods?

And by extension, what happens in the rural areas is far worse. From being forced to spend the duration of their periods in makeshift exile homes either in the vicinity of their own homes or in far away barns with animals is commonplace for some young girls in countries like India and Nepal. These girls are expected to start fires and cook for themselves in rooms that are too tiny for them to even sleep in. Most of these structures are snake infested and lack electricity. As a result, these girls start off by feeling too scared to enter such places of exile. How pathetic do things have to be if, with age, these girls fear rape, abduction and assault way more than the snakes and animals in their monthly exile homes?

Conversations around menstruation and reproductive health are still taboo in most modern homes. Mothers and grandmothers themselves impose superstition on young girls while fathers and brothers pretend as if they don't even realise what's going on. There's a reason why I shared my own story here - even in a "fuss-free", urban, educated home, my mother refused to properly talk to me about my reproductive health. My mother, who is college educated. Is it any surprise then that scores of young girls in both urban and rural settings think they have blood cancer when they first get their periods?

This week on the podcast, we spoke to Aditi Gupta, the co-founder of Menstrupedia which is a leading comic designed to educate primarily young girls but also young boys and adults about female reproductive health. Aditi's story itself didn't start off too differently from what I explained about the urban middle-class setting in India. She herself was never really given "the talk" and once she got her period, she was told not to touch pickles or enter places of worship. For a long time, Aditi was forced to use rags during her period, which in turn caused rashes and all kinds of discomfort as a result of these rags being washed and reused. In school, her teacher skipped the chapter on reproductive health and during exams, no questions were ever asked from that section. It was only in her early twenties that Aditi and her partner Tuhin started reading up about what was actually going on in her body that caused menstrual cramps.

At the time, the duo was studying at NID - the National Institute of Design in India - which is one of the most respectable institutions in our country. They considered themselves to be young, modern, educated individuals who sadly didn't know the very basics of menstruation. This got them thinking about all the other little girls out there from less privileged backgrounds who were, to an extent, being oppressed by their anatomies.

The idea to create Menstrupedia was born right then but boy, was it a hell of a journey to finally release the finished product into the world.

This is what I love best about talking to people like Aditi because everyone looks at her now and sees a success story. And a success story it sure is. But how many people really know that Aditi and Tuhin tried to create a computer game first, only to realise that many little girls in India didn't play games or have access to the internet. Then they thought of creating a board game which posed other technical difficulties. It's so interesting to hear about the process it took to finally get to the comic, the research that went into it, the thought and effort that went into creating the characters, and the struggle it took to get parents and teachers in India to allow their children to read this comic.

It's highly sensitized for our community, starting from the basics and explaining even things like the function of the pituitary gland, PMS, hormonal acne, hygiene, how to make a pad at home and how to clean rags if that's all you use, among other things. And what's more? It's fun and interesting.

The plot revolves around three little girls, one who already gets her period, one who gets it during the narrative of the comic, and one who is younger and hasn't had her period yet but is curious to learn. Priya didi, who is one of the characters' older sister, is a doctor who explains everything to the girls. You need to listen to the episode to find out how Priya didi's character was built, but here what I'll say: My best friend's mother who was a doctor played a crucial role in my education regarding reproductive health and I was lucky to have that influence in my life. But for all the other kids who didn't have someone like her in their lives, Priya didi is that person for them. 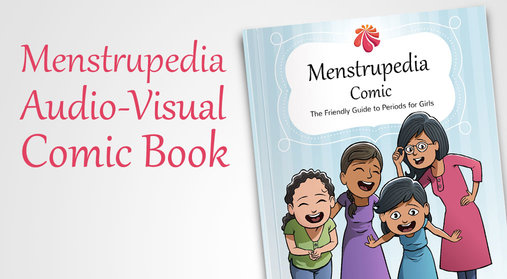 This comic is ingenious and I wish I got to read it when I was growing up.

I try not to force people to listen to our podcast but please, this time, I'm going to request you to not only listen to Aditi's story but also purchase a copy of Menstrupedia for all the little boys and girls in your life. You'll thank me for this.