It's been a while since we talked about all the crazy that's made regular appearances on this blog from the time we started talking about my fee-ya-lee-yings here about two years ago. And I don't mean the high-pitched singing or the fake-dramatic arguing with Shane or the long debates outside my bedroom window with my neighbours' ginger cat. I'm talking about the kind of crazy that used to make Shane want to pick me up by one ear and toss me into a garbage bin in a shady alley. Because I've done my fair share of behaving like a garbage person in the past.

In my defense, I don't like being a garbage person - the garbage is just in me. In the past year, I finally began to put two and two together to figure what was happening. I started looking at my life from the time when I was living in a hostel far away from home, surrounded by the best group of friends anyone could ask for, studying the subject of my dreams. It was one of the happiest phases of my life, although, my friends and I distinctly remember those few days when I'd take a day off, refuse to get out of bed, and just mope around. I'd be irritable with everyone around me and mostly just refuse to talk to people about what was wrong. And that was because nothing was wrong. I couldn't possibly put a finger on the problem and say to them that this, right here, is the reason why I'm about to bite your head off in the next five seconds.

On one such day back in 2013, I was sitting in the garden of my hostel with my roommate (who was my close friend's younger sister) and another girl living in the hostel. We were sitting there having evening tea and let's just say I was in one of those "moods". Every single word that escaped this acquaintance of ours seemed to be getting to me and by the end of the evening, I'd snapped at her a couple of times. My roommate, who was never one to interfere in anything or ask many questions, actually took me to the side and asked me what the hell my problem was. I was so pissed off by then that I snapped at my roommate that there was no problem and went to bed. The truth was that there was no problem indeed, except that I was PMS-ing really hard and my mood-swing had gone out of control that evening. I wish I'd known this back then. 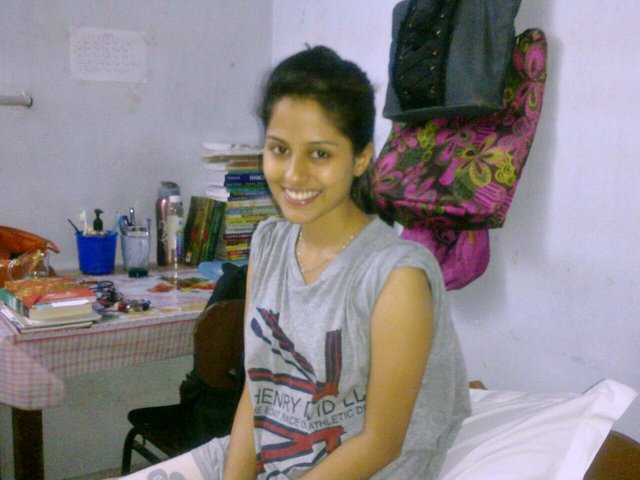 The picture was taken that same year in my dusty hostel room by that very same roommate. Can you see the crazy in those eyes? Either way, four years later, here we are, addressing the crazy.

Like I've shared before, some girls go through extreme abdominal pain, bloating, headaches and other physiological symptoms including breakouts before, during or even right after their period. I have experienced severe abdominal pain a handful of times in my life when my period got delayed but I still don't know what bloating feels like and not even once have I had any other physiological symptoms before my period. I never even break out! But nature has given me "the crazy" wherein about 9 days before my period is about to set in, I get horrible mood swings. I could be the happiest person just a day before this happens but once it sets in, no one wants to hang out with me.

Last week, I got my period for the first time in exactly three months. This cycle was literally 91 days long and I had some idea of what was going on - stress. I had a pretty stressful period from mid-March to early June and in the past, stress has delayed my period. Never for three months at once but there's always a first time for everything.

Meanwhile, Meenal's mom was certain that I was pregnant and my mom was totally unaware of the unfortunate delay (thank God for that or I'd have received home-cooked baby food in the mail). Three pregnancy tests were taken during that period, one even at my GP's, and all the while Shane sat in anticipation of "the crazy" that was bound to set in. About 80 days into my cycle, I could feel a painful tenderness in my left breast which thankfully happens to be yet another faithful indication of what is to come. And like clockwork, on the 91st day, I got my period and it was completely normal. No pain, no bloating, nothing. Not even the crazy. I had a very busy week leading up to this event so I thought maybe the crazy just went unnoticed. And what's more, Meenal arrived immediately after and I had an even busier week to look forward to which meant that I would probably not notice any mood swings while she was here. I was so happy and excited, nothing could dampen my spirits.

And boy, did it hit me like a brick to my face.

If you watch this vlog, you'll notice how normal and happy I am on Monday and how dead I look on Tuesday.

The clip right before I say "good morning" on Tuesday is that of me laughing like a maniac on Monday evening. And then I woke up the next day and couldn't even bring myself to smile.

Meenal kept asking me what was wrong and I kept trying to shove that feeling away from me, earnestly trying to laugh and joke and enjoy the moment. But that one day was just a lost cause. I couldn't believe that I was capable of feeling this shit while my best friend was right here with me, making plans, heating up paranthas for me, taking me out to dinner, and just trying to help me get out of my mood swing. The more I tried, the worse it got because I managed to mix that pre-existing emotion with guilt for not being able to feel happy while Meenal was here. That evening, I gave up and went to bed at 8 p.m and immediately fell asleep. That's another thing that happens around these times - I could fall asleep at any given time because that's a welcome relief from the feeling of wanting to jump off a cliff.

And the next morning, it was gone. Just like that. Poof! And I was back to normal.

We took this bit out of the video later on and put it up on Instagram because it was funny how I rolled my eyes at Meenal for not having watched an Indian classic before:

Meenal forced Ankita and Shane to hike up a "less traveled path", much to their dismay and the three of them spent an evening watching a 'Hum Saath Saath Hain". You are not ready for the commentary. Link in bio!

But it's not very funny to me now when I look at it because I know that I was genuinely rolling my eyes out of irritation back then. So what if she hadn't watched a movie, right? Exactly. This is exactly what I meant by saying that I get irritated and snap at people when there's literally nothing wrong.

Meenal surely felt bad the whole time and in between trying to cheer me up, she asked me if I could get the bloody mood-swing after she was gone. I wish I could control it myself. But after we got the whole video together, she told me that people who might have been reading about my hormonal mood-swings on my blog for a while now could finally see a fraction of what it actually looks like in real life.

The good news is that I've been super calm and happy for the most part in the past few weeks. This is the one bad day I've had in almost two months now and that's amazing in my world.

As a woman and as a human being, my body is also constantly changing and evolving so you never know - I might stop getting these mood swings some day and all I'll have to deal with is getting bent out of shape in abdominal pain. Or even better, have no problems to deal with at all.

Either way, it's a process and we're in it. We'll find out how things end up eventually and I'm ready to admit that that's the beauty of it.