I'm back from London after having spent what was quite possibly the best four days of 2017 so far, after reliving what was possibly the best part of my childhood with the person I have the memory of calling my first ever best friend. I don't know how to explain the feeling but imagine having a friend at the age of 10, someone who was your safety blanket in an unfamiliar setting, someone who was as weird as you (or to put it more kindly, shared all the same interests as you) and was pretty much an extension of yourself. Imagine being forced to separate from each other due to life's circumstances, swearing to keep in touch, and actually keeping that promise for more than three years until this someone (whom you still referred to as your best friend by the way) left the country on a scholarship to finish high school. Now, imagine living in an age where you don't have access to good internet and the only way you kept your promise of staying in touch until that point was with the aid of actual handwritten letters and phone calls on speed dial. Putting the Indian Ocean between best friends in those days was far from ideal. That's when you end up resorting to only wishing each other on birthdays. Add to that gap, five years of uni, two jobs, and a wedding. Imagine finally ending up in the same country after all that, just an hour long flight away from each other. Now imagine reigniting that friendship at this stage and realising that there's no awkwardness, no distance, and not a single thing that feels unfamiliar. I hope I've managed to do justice to what I have felt and experienced over this weekend. Because there's no other way I can explain how special it was.

This short holiday also served as a good time for me to press my reset button and get some things straight in my head. But more on that later.

At her cozy home in London, I met this guy:

I promise that when she casually said the words, "Oh, he just eats shoots and leaves", I immediately got the pun. And last night, a broad smile replaced an expression of general lack of interest on Shane's face when I too casually said the exact same words to him when we landed on this picture.

We also ended up watching the Harry Potter movies from Chamber of Secrets to Order of the Phoenix. We avoided Philosopher's Stone because I was reading it's illustrated version by Jim Kay at the time and trust me, that's way better than the bad CGI on the film. I'm not saying I still wouldn't watch it, but it only made sense to start with the second movie. I wish I'd stayed for a day extra because, by the time the fifth movie ended, I had exactly fifteen minutes to pack and leave in time to catch my flight back home. Priorities!

What made this rewatching of the films for the umpteenth time extra special was the fact that we were both watching them with the people this craze started with in the first place. It was surreal to sit in a room with the person I practised those lines with and to realise that we both remembered them. We lost count of the number of times we delivered lines with the characters on screen this weekend, and we even started noticing some things that we never did until now. For example, we found it hilarious how Harry had the habit of holding hands with humans and even inanimate objects throughout the Chamber of Secrets. When he got lost in Knockturn Alley, he held the mould of a creepy looking moving hand and we couldn't figure out why any sane individual would do that. Following that, he held the hands of almost all petrified people he came across at Hogwarts and ended up getting into trouble for being seen at the wrong place at the wrong time, doing the wrong thing. Finally, it was holding Hermione's hand after she got petrified that got him further clues about the Chamber, and losing hold of his wand to hold a dying Ginny's hand that led to his wand ending up in Tom Riddle's hand. We actually suspect now if the whole hand holding thing was a plot point in the movie.

Madam Madan and I always used to take things a little too far as you can see or maybe even remember from this post. We even composed our own "Harry and Cho Chang" song in an alternate reality where Cho Chang was just whiny and annoying, and Harry was trying his best to get rid of her. And that was at age 12.

So at 25, when we stood in line for close to an hour to get this shot, we brushed aside the realisation that we may not have mentally grown past the age of 12.

At one point, I turned to her and said that I felt a little anxious about the prospect of posing for this picture in front of scores of strangers. From her height of 5'8", she scanned the crowd before remarking, "They're all our age and are patiently waiting in line with a handful of kids to get the exact same picture. These geeks just lost their right to judge fellow geeks".

And she was right about the handful of kids. I could count the number of actual kids in that line on the fingertips of one palm. Rowling definitely fucked up our generation.

After getting our pictures taken, we were so exhilerated and high on adrenalin that we immediately jumped on a bus to the Leaky Cauldron. In London, there's a spot that you can visit which denotes where the Leaky Cauldron could have been situated. But that's not where we went.

We went to an actual hidden pub that serves "drinks from your childhood". We were there for their Butterbeer of course, but you can also find drinks inspired by Winnie the Pooh and Narnia among others in there. The pub is called 'Blind Pig' which in itself is a "US underworld slang for a good old-fashioned den of iniquity". And much like the Leaky Cauldron, it's not meant to be found that easily. In fact, you need to look out for a vintage 'Optitians' sign and proceed to walk in and past a bindfolded pig doorknocker. Cheeky. 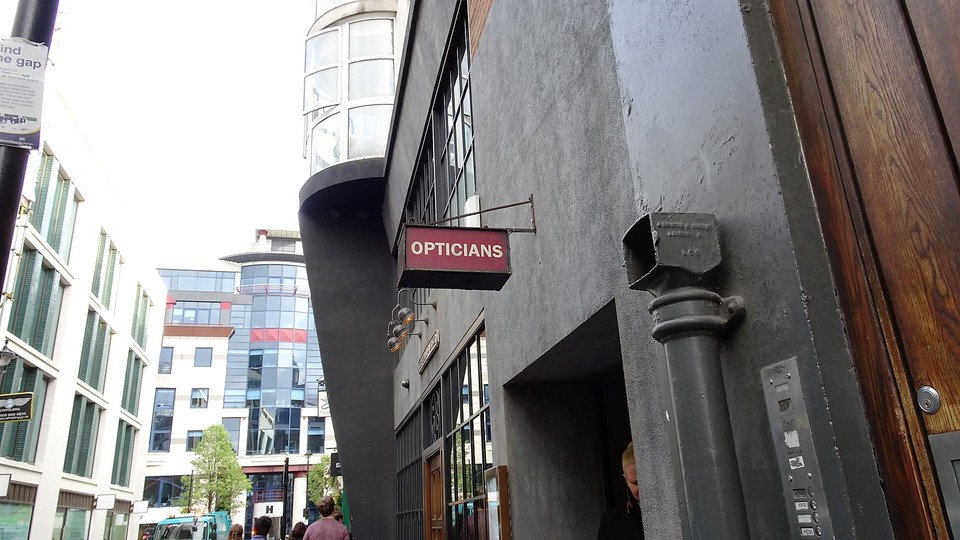 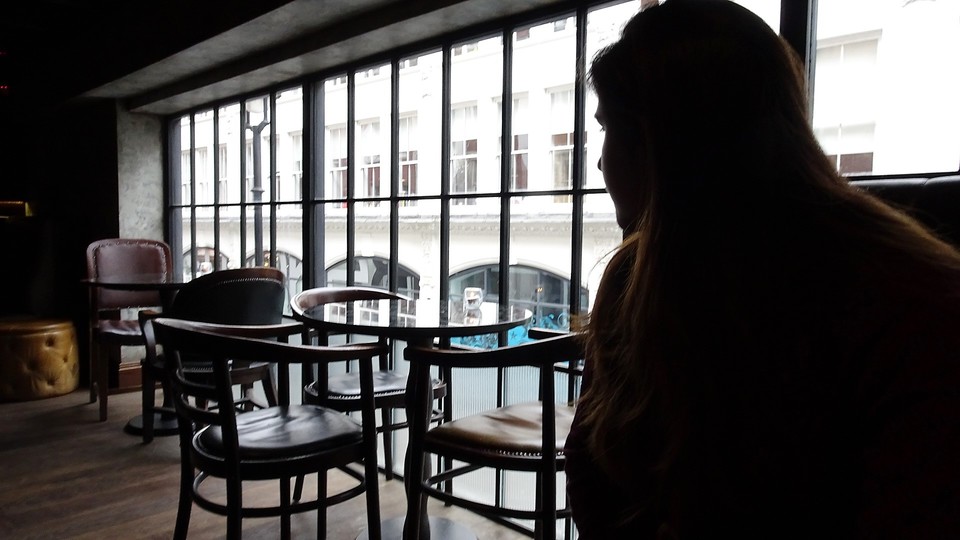 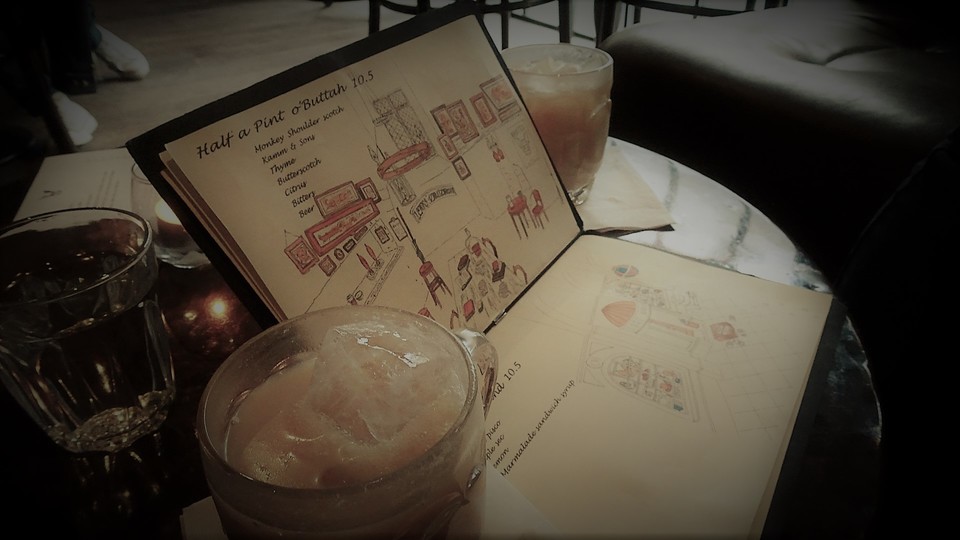 Truth be told, that cocktail was more Butter Whiskey than Butter Beer but I'm not complaining. It was delish!

From there, we proceeded to the next Harry Potter landmark on our list - The Millenium Bridge. You might remember this bridge collapsing in Half-Blood Prince after an attack by the Death Eaters.

I've crossed this bridge before but it was extra special this time because we were both on an all time Harry Potter high. 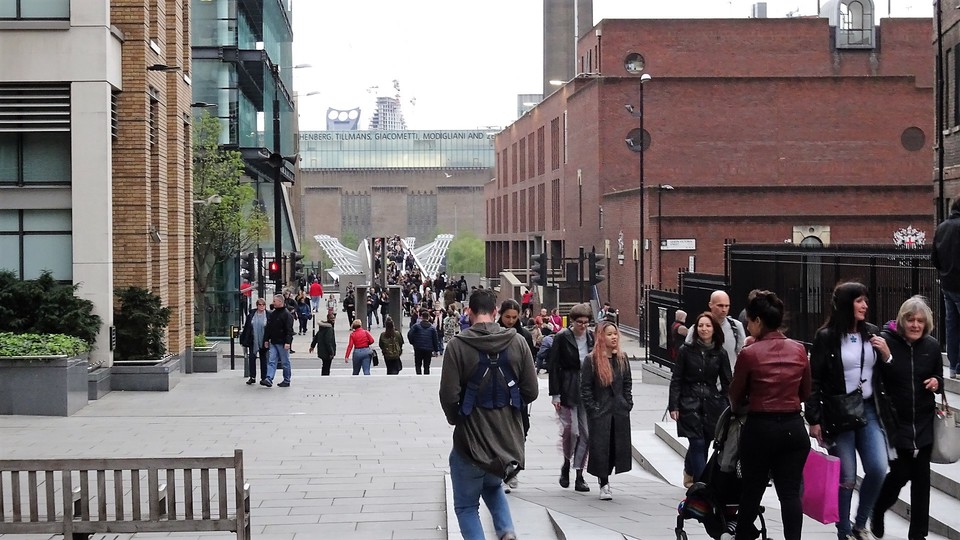 Here's the view we enjoyed from the bridge: 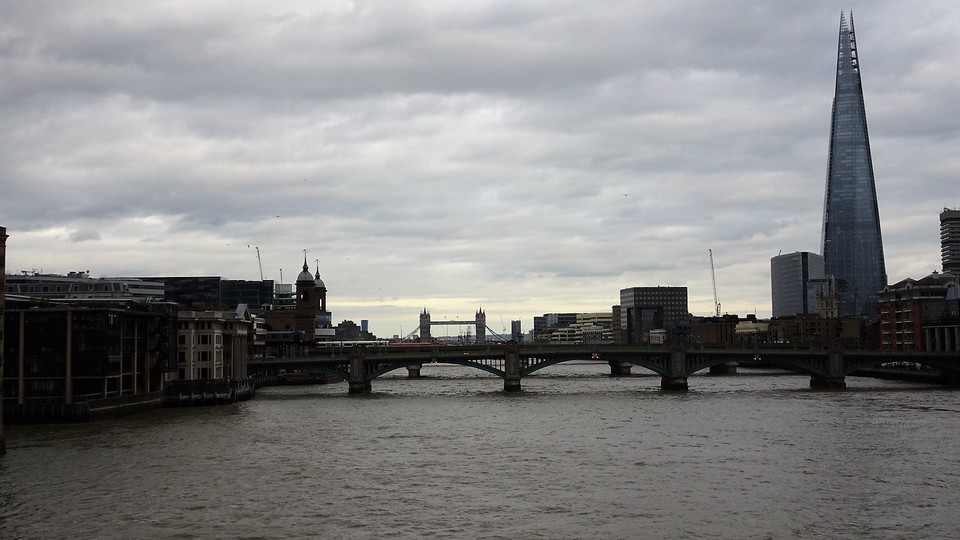 All the cocktails coupled with a walk across the fiery Thames while it was freezing by the way, was not too kind on our bladders. So we too almost had our own version of a Millenium Bridge disaster which forced us to shamelessly barge into the Tate Modern Museum right across the bridge just to use the restroom. Remember that realisation that we might not have grown mentally past the age of 12? The one that we brushed aside? Yeah, this is where we embraced it.

And that was just Day 1 which may I add, ended with pizza, a glass of Rosé, a cozy blanket, some sweet smelling candles and 161 minutes of an uninterrupted viewing of Harry Potter and the Chamber of Secrets. Beat that, 2017!