Disclaimer: The objective of this blog entry is in no way to convert you or make you feel uncomfortable. It's just a record of personal experiences for the purpose of a) looking back to chuckle upon b) recording out-of-the-ordinary circumstances and c) finding out if anyone reading this blog can relate.

This story I'm about to tell you is so boring and uneventful that Shane asked me to spare people the trouble of reading about it. Meenal said that we need a better story, a more eventful one, one that would make us look cool. But I disagree with both of them because life is sometimes boring, monotonous and uneventful. Much like the day on which I came up with the name 'Desi Outsiders'.

I don't even remember the date because it's not important. At least, it wasn't at the time. I walked to Shane's work, sent him a text that I was there, waited at the lobby and walked out with him. We have about five roads to cross before we reach our go-to grocery store and right outside his work as we were about to cross the first of the five, I said, "You know what would be fun? A podcast. I think I want to host my own podcast".

He must have grunted in response and I must have taken that as a sign of approval because, at the second road, I said, "It could be about our life outside India. How's Desi Outsiders for a name?"

"Hmm. That's actually an interesting name although all you did was put two abstract words together to convey what you said earlier. But it's catchy".

Once we got home, I texted The Bromance and asked him what he thought of that name for a podcast about Desi people living abroad. He told me in no uncertain terms that he didn't give a shit about podcasts or their names.

That evening, Shane and I bought a domain and registered that name. Once that was done, I asked him if he would be my co-host and he said no. He was only interested in the "behind the scenes" aspect of my podcast, were I to actually go ahead and start one. And that was that.

For about a month or so, no one brought up the name or the domain or the idea of the podcast. Until one fateful day in July 2016 when Meenal was traveling from Gibraltar to Prague after quite an eventful and emotional summer with her family. She sent me one text right before her commute - "Podcasts are slowly becoming a thing in India. Do you think we could host one together?"

I've already shared a bunch of screenshots from that conversation here but I guess I'll share this one once again: 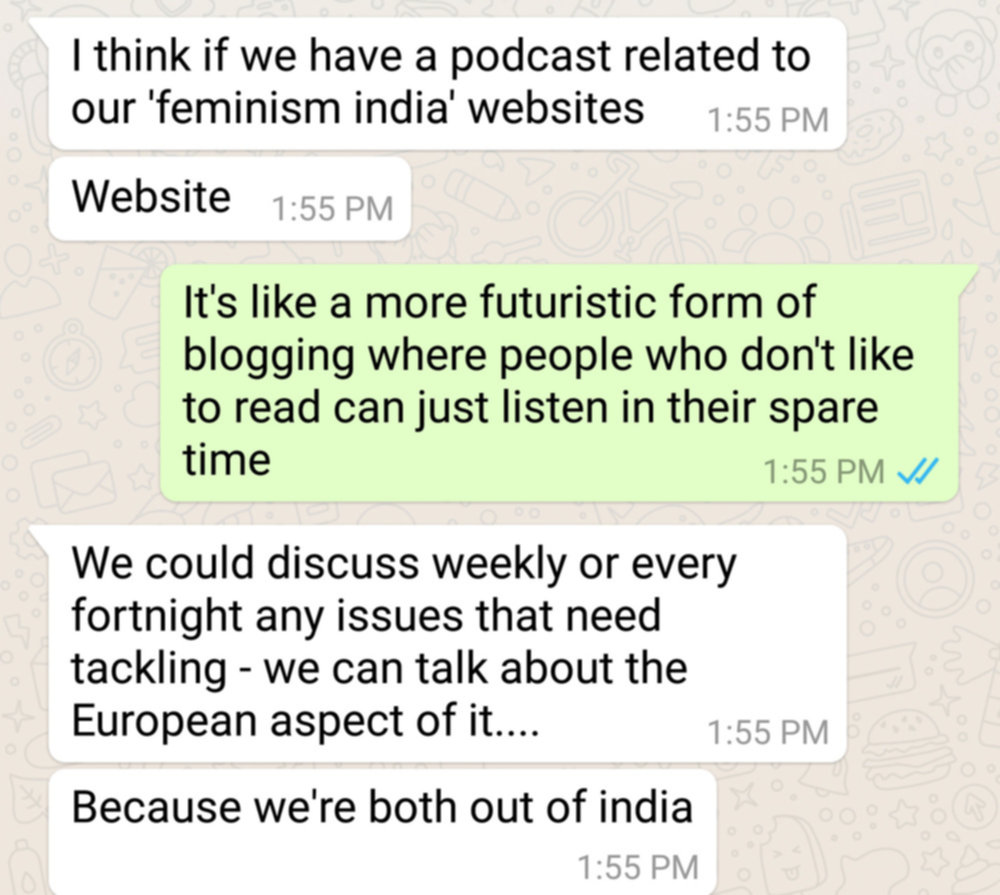 Immediately, the Desi Outsiders idea that I had been marinating at the back of my mind came rushing back and I pitched the idea of her joining me on the podcast as my co-host.

Till date, I cannot believe that within a month of just thinking about starting a podcast, getting excited for one day, and forgetting about this idea in the weeks to come, I ended up in a fulfilling partnership with someone like Meenal.

I always thought it was a little "woo-woo" how it all worked out. Strange, supernatural, "the universe has a weird way of making things happen" kind of woo-woo.

And if you also thought that was weird, just wait until you read the second half of this post.

One year after the first major incidence of the "woo-woo", Meenal was right here with me, spending a week at my place. I'm talking about her latest visit from a few weeks ago.

About a week before she got here, one of the guests on our show, Sukhminder Kaur, got interviewed on the BBC Asian Network. We felt so happy for Sukh that we got in touch with her to congratulate her. We're so glad we decided to reach out because, since that day, Sukh has been a constant in our lives and has turned into a dear friend.

On Meenal's last day in Edinburgh, we made plans to have dinner at one of our favourite little spots with The Bromance. We had to record an interview that evening and by the time we were done with work, we had just about half an hour to get ready and leave the house. I'm sure it was in the latter part of that half-hour that Sukh came up in our conversations once again and we fantasized about getting a spot on the BBC-AN ourselves. And then, we left for dinner and forgot all about it.

Since Meenal has a Czech phone number, she doesn't get data on her phone while travelling in the UK so she's constantly dependent on good wi-fi. But for some reason, she couldn't log in to the wi-fi network at the restaurant. Which is why, as soon as we reached back home, her phone started buzzing. Nothing extraordinary there because that would be the case with each and every one of us in this digital age if we were to be cut off from the internet for a considerable length of time.

But a yelp from our living room followed by an "OMG Ankita what kind of hoinky-doink-supernatural-woo-woo shit is this?" made me pay more attention.

As it turned out, Meenal's childhood best friend Disha (Hi Disha!) has a cousin working at the BBC-AN who had heard about our podcast through her and was hoping to get in touch with us. So Disha asked Meenal for our official email and forwarded it to her cousin. All this, just hours after we talked about how cool it would be to get a spot there. It was unbelievable!

If a year ago, it took a month for the woo-woo to happen and get us together, this time it took just hours and we couldn't possibly wrap our heads around it. Everything was happening so fast after that, that our only regret was that we didn't fantasize about this on Meenal's first day in Edinburgh instead of her last. It would have been the best thing in the world for us to have done this interview from the same room. But that doesn't make us any less grateful for the opportunity.

A lot of other similar things have happened throughout this journey and I decided not to share them all here so as to not put you to sleep. However, Meenal and I have decided that we love this Desi Outsiders "woo-woo" and all we have to say is Keep it comin'!

Those of you who didn't get a chance to tune in live yesterday, all you need to do is go here and start listening at 2:13:15 to catch our whole interview!

And while you're at it, perhaps tell me in the comments if you've had similar woo-woo instances in your lives? Because there are very few things in life that are as satisfying as seeing Shane​ trying to come up with scientific explanations for why some things happen ;)