Sometime in March of this year, I was secretly texting Meenal's best friend in the hopes of arranging for her to get on a plane and come to me for her birthday weekend. The only glitch in our plan was that she was (and continues to be) a medical student. And if you didn't know this already, IT SUCKS BALLS TO BE A MEDICAL STUDENT.

Reasons why it sucks balls to be a medical student:

I wouldn't hate on kids right now for no reason unless they did something grave. And when little humans obstruct my plans to transport my friend to me on her birthday and leave me with a weirdly inappropriate metaphorical feeling of tenesmus after all the planning I did, things are fucking grave. Or, you know, I just need someone (or a group of tiny innocent individuals) to blame for the fact that I voluntarily chose to be friends with a medical student. Bleh!

Meenal had a crucial Pediatrics posting at the time of her birthday which meant that she couldn't possibly take a few days off to relax. So a little while after accepting defeat, I confessed my plans to her and promised that I'd celebrate her birthday the way I'd intended to when she arrives here next. It took close to four months for me to finally be able to keep that promise and by then, she'd already forgotten all about it.

Which is why I refused to go pick her up at the airport this Saturday and instead started getting her wee birthday party together. I could share pics here but why would I do that when I could show you everything in a vlog? That's right. There's a vlog coming out tomorrow and we're going to take you guys along for Meenal's fake birthday celebration.

What I will share here though, are a lot of stories and moments that didn't get recorded on the vlog. Sometimes, the best things happen when the camera is off. Like this one for example: 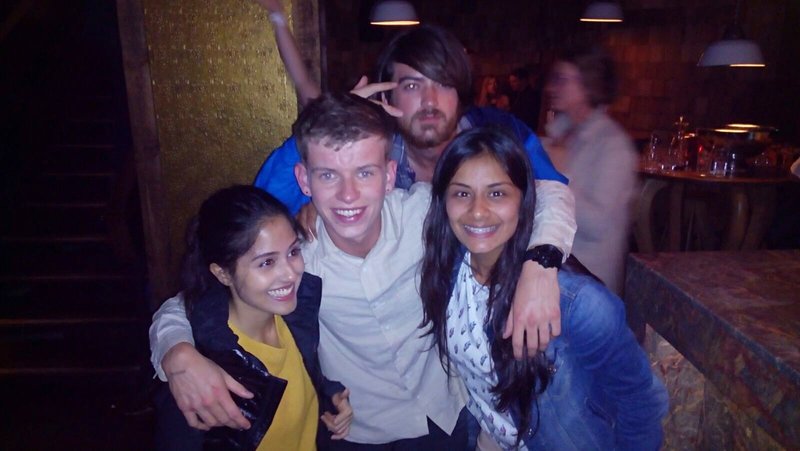 Soon after she sang her own contorted birthday song and cut her cake, I gave her exactly two minutes to freshen up because we had the famous Edinburgh Pub Crawl waiting for us and we were already kinda late.

In the duration of that night, we "crawled" from pub to pub with a group of strangers, danced with a lot of people we can't remember now, stepped on sticky substances on dance floors praying that it was just booze, photobombed other people and got photobombed in return.

This guy who is posing with us in that photo? We have no idea who he is (or was). We'd just see him everywhere we looked, dancing with everyone, being super friendly, and having a seemingly better time than everyone else. I don't know what happened to him in the end but I'm sure he must have passed out on some dance floor after having backflipped off a bar stool.

I'm usually always on alert for creeps because my female Indian brain is wired like that but Meenal's different. She's the kind of weirdo who voluntarily makes friends with people. I don't fully understand this phenomenon but I can try to explain - Meenal actually opens her mouth in the presence of strangers to talk to them. Like, small talk and everything. Which is why she and this guy became friends and by extension, I became friends with him too. Ten minutes later, he asked her to marry him and I had to finally step in and ask him to do the backflip off the bar stool and pass out on the dance floor a little sooner than he'd intended to. I'm rolling my eyes so hard right now.

And the guy behind him? We didn't even know he was posing for this photo with us. We'd never seen him before that point and never saw him again. Nothing out of the ordinary there.

And that expression on my face? That's me looking at Shane like, "Can you believe I just made a new friend? I didn't ask for this."

Immediately after that, we decided that we wanted to start a girlband because it made a lot of sense at the time.

If only we could sing, Desi Outsiders would be a girlband.

We're already very cool people just like the kind that sing in bands and we already had mics that we used for the podcast. We just had to learn how to sing. But that didn't end well for the others at the pub crawl so we dropped the plan within 10 minutes of its conception.

But what a night we had! 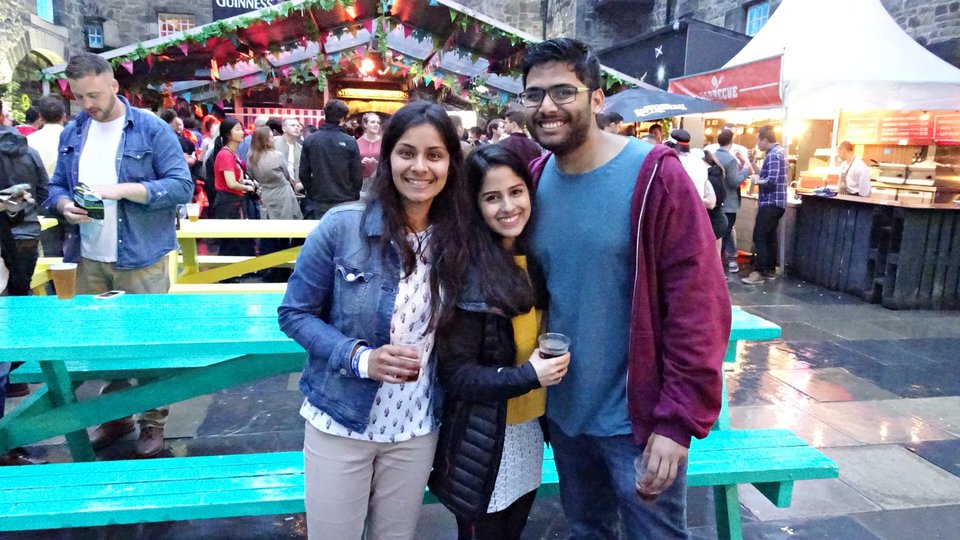 It was a night when Meenal walked on the cobblestones of Edinburgh, hand-in-hand with both me and Shane because she wasn't wearing the right shoes and could have easily slipped and landed on her bum had we not held her up.

It was a night when most pubs began to get too loud and crowded for the three of us to have "heart-to heart" conversations so we resorted to go out and sit on the pavements to talk. That mostly ended in Shane asking me to shut the fuck up and refrain from giving her advice because most of the advice I usually give is batshit crazy.

It was a night when we decided to ditch the others at 2 a.m to have kebab from our favourite kebab place. Except, when we got there, Shane was the only one who actually got any kebab because greasy margarita pizzas that could cut short our lives by a few months seemed more appealing to both me and Meenal. We could feel that pizza clogging our arteries and it was amazing.

It was a night when we returned home in the wee hours of the morning and thought it would be a good idea to try and watch a movie. "The night is still young!", cried Meenal. And then she fell asleep just 7 minutes into the movie so we had to abort the mission.

Birthdays are very important to me and I feel that every person on the planet needs to make a big deal out of growing a year older and getting a year closer to death, as grim as that sounds. Meenal never had birthday parties growing up and unsurprisingly, she grew up to not care about her own birthdays either. But that shit cannot fly if you're in any way related to me and I made sure we celebrated her first birthday after being friends with me the way this girl deserves to be celebrated each and every day.

I have her for an entire week and our calendars are full of things we've planned to do. Watch this space for more updates and don't forget to subscribe to Desi Outsiders on YouTube for our vlogs in the coming days!