Aaaaaaah it feels so good to be back at my desk to write. It's been close to a month since I sat right here to bid adieu before leaving on my holiday, and what a holiday it has been!

Upon returning, my initial impulse was to sit down and start typing out an account of everything that happened during the past three weeks but guess who snatched my computer from me?

As you've already seen, Shane has suddenly been bitten by a certain writing bug and has convinced me to hand over all responsibility for recording the details of this trip to him. He's already published two posts that I love and has about another three saved in the drafts. So while I'd love to go into some of the most interesting things that happened during our trip, I think I'm gonna leave that to him.

What I will write about though, is what happened while/after returning as he hasn't forced me to part with that joy as well. Don't get me wrong, what I have to report is nothing horrendous, dramatic or traumatizing but...you know what? The second last detail that you will read here can maybe be categorized as traumatizing so how about I get right into it?

Last Friday, the 6th of October, at 6 p.m, Shane and I had exactly twelve hours before we had to leave my home and head for the airport to catch our flight to Edinburgh. And what were we doing at that time when we still had four suitcases to pack? 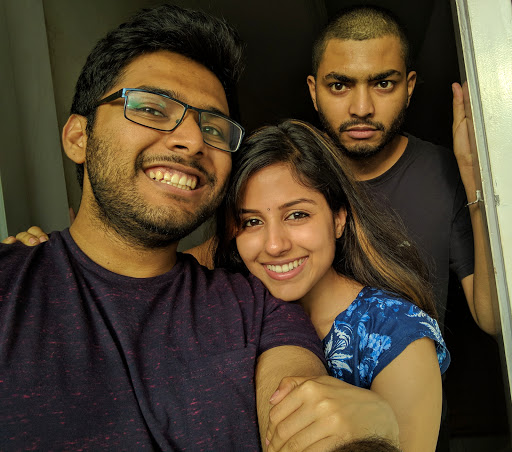 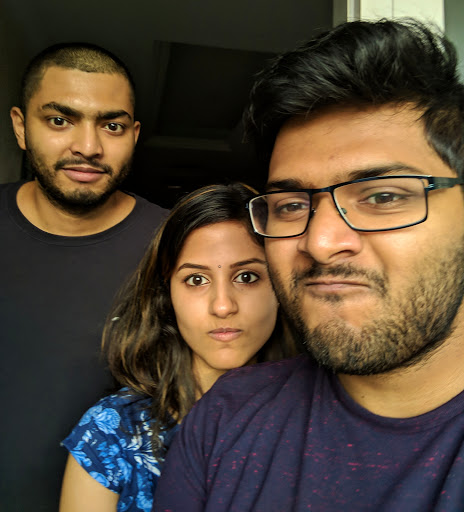 That's Shane's brother by the way. He used to look like this: 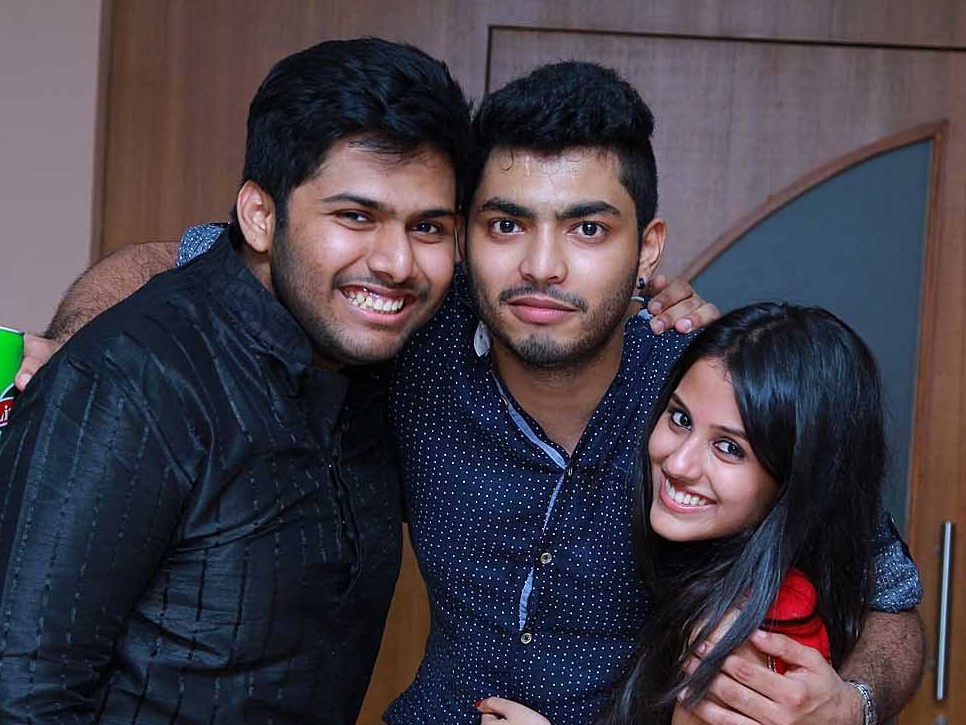 But he shaved his head right before we arrived because, I don't know, he feels jealous of The Bromance for hanging out with us more often and thought we'd only go out drinking with men with shaved heads? It has to have something to do with us and how much he loves us, of course.

Anyway, by 7:30 p.m, my mum and I had started panicking enough to shove Shane, his brother, and my dad into our tiny guest bedroom where we'd laid out everything that needed to be stuffed into the four suitcases.

Remember our bi-annual goodie bag service where my parents send us eatables, clothes, and other goodies in time for each of our birthdays? Well guess what, it's my birthday on Monday and since I was right there with my parents up until almost a week before d-day, our suitcases magically transformed into goodie bags. The amount of food we carried with us could feed a herd of baby elephants for weeks and by the looks of it, we're going to start resembling baby elephants in a few weeks.

So by 9 p.m, Shane and his brother had finished packing under my able supervision and we got to the business of figuring out what we were going to do during the twelve-hour layover awaiting us at Abu Dhabi. It was a good thing we decided to look this up because it made us want to check-in in advance as well. As it turned out, we were two of the last people who'd had this brilliant idea to check in online because on our second flight, we couldn't even get seats together unless we paid extra. It was a bit annoying but not something we couldn't fix. We did, in fact, end up paying extra because there was no way we were going to spend an eight-hour flight in two separate corners of the aircraft. Especially considering the twelve-hour layover before that flight, neither of us was ready to risk sitting next to a screaming baby and/or a stinky adult.

Once we were checked in, we got to the business of finding out how to apply for a transit visa so we could explore Abu Dhabi a bit in the twelve hours we'd be spending there. We picked out a few locations we wanted to see, checked the dress code and other requirements and blindly believed the website that told us that we could easily get a visa on arrival to leave the airport. I was excited to be stepping out of the airport but Shane began moping, groaning and whining the second our pilot announced that it was 50°C outside before landing. 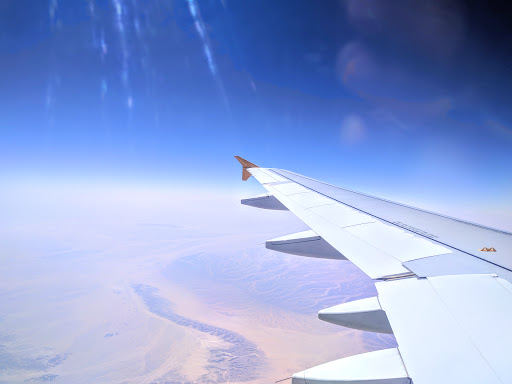 First of all, that didn't sound right in the least but then, we were landing at noon and the place was basically a desert so maybe the temperatures went that high? Or maybe the pilot meant 50°F? But that would mean it was 10°C outside which it most definitely was not.

Anyway, we walked up to the travel assistance desk bickering about the temperature and scrutinizing what the pilot must have meant, when we were told that the rules had changed and it would take a minimum of twelve hours to even process our visas. We should have applied at least a week in advance. Fucking wonderful, innit?

As we walked away from that travel desk, staring twelve-hours-of-being-stuck-in-an-airport in the face, Shane slowly turned to me and said, "I wish we could walk straight out into the 50°C heat right now".

What really didn't help the situation was that we were both sick that day, an infection that got the better of us on the night before, and every few minutes at least one of us would burst into a fit of coughing. What came out of the time spent at the Abu Dhabi airport is that both Shane and I can now draw the entire layout of the airport from terminals 1 to 3, tell you exactly where any given shop is, what all treatments the spa offers, and why you should definitely not get a chicken shawarma with caramelized onions from this chain called Shawarmanji - it had barbecue sauce in it (!)

Our only saving grace - really good internet and trusty Netflix. We were literally 'Netflix and Chill'-ing there (before you scroll to the bottom to leave a comment detailing the meaning of the phrase, notice that I said literally, not figuratively) in an area that was supposed to be the airport's "library". A library that only had books in Arabic but oh-so-many comfy sofas. We watched about three movies and five episodes of various shows before finally boarding that flight back home.

Upon landing, I (who never pees on flights) thought that I could brave it till I got home but guess whose baggage was the very last to arrive? So instead, I braved the loo at the airport and please don't take the word "brave" lightly here. It was a war-zone and since I'm snacking while typing this out, I'm going to choose to refrain from going into detail although no one can erase the images that just popped up in my brain. Word of advice - Never, I repeat, never use the ladies' loo near the Edinburgh airport's baggage collection area.

Once we got home, we opened our front door to a familiar scent - the scent of home. That's exactly what I exclaimed upon entering - "It smells of home!" - when Shane rejoined with, "It smells of stuffy air and mold."

But imagine our horror when a mere five minutes after he made that statement, we opened our fridge to find blue-green-grey-purple fungal growth in it.

Before leaving our house, Shane and I meticulously cleaned every surface, nook, and cranny of our house because my mum (and by extension I) always maintains that there's nothing worse than returning from a holiday to a messy home. Before every holiday, we scrub and clean our house thoroughly. So why were alien life forms growing in our fridge -
a fridge we had emptied out and turned off before we left?

Because we hadn't emptied out the ice trays.

Because we're not very smart.

A pool of water had collected in our veggie compartment with all kinds of multicoloured specimens growing in both it and all the surfaces around it.

We went through the whole process of cleaning everything before leaving for our holiday in order to avoid something exactly like this. So basically, after an almost 30-hour commute which was just bearable, we had to fall on our knees and clean the fridge. And no ordinary fridge at that but one that was by the looks of it, growing extra-terrestrial life forms. It was as pleasant as walking out into a desert at noon when it's 50°C outside, clad in nothing but thick black leather from head to toe. Or at least that's how it all felt in my brain.

And you see, we couldn't not immediately clean the fridge because a) I couldn't possibly be anywhere in that house knowing that the things growing in my fridge could potentially eat me for dinner and b) remember the goodie bags and all the food? Yeah, they had to go into a freezer ASAP.

Once that was taken care of, I hopped into the shower thinking that I would quickly get out and hit the bed. But the minute I stood under my shower, my shower, my perfect shower, I almost wept. It felt surreal.

For the first time, I noticed that the water pressure and temperature were perfect. That the space was perfect. That my soap was perfect, that the scent surrounding the space was perfect, that the glass was fogging up the way it was supposed to, that the lighting was making me feel calm. There's just something in the feeling about your own shower that cannot be recreated elsewhere no matter how comfortable you think you are. I felt as though standing under that steady stream of warm water, I could just close my eyes and fall asleep. I was calm, I was happy. So, so happy to be back home.