When I got married, my parents who've successfully raised a spoilt brat decided that they were going to expand their territory as far as the "spoiling" goes. So every year, they send us two goodie bags - one for my birthday and another for The Husband's birthday. One thing you should know about my parents is that they've never really been good at surprises. Whenever they planned a surprise for me as a child, one of them would eventually give it away. For example, for one of my birthdays, my parents were getting me a watch that I had my eye on. I don't remember exactly which one of them let the cat out of the bag but at some point, they convinced me that I wasn't getting a watch after all. Then, for some reason, I remember my mother trying to convince me that they did in fact get me the watch. When I refused to believe her, she showed me the fucking bill as proof of purchase. It was like she was saying to herself, "That oughta do it, you little shit!". I still can't remember why she decided to show me the bill but I distinctly remember not getting the watch immediately because, "It's a surprise birthday gift so you'll get it on your birthday".

With the goodie bags however, it's impossible to keep them a surprise because they need to make sure that we're home when they get delivered. This, by the way, is how it arrived yesterday: 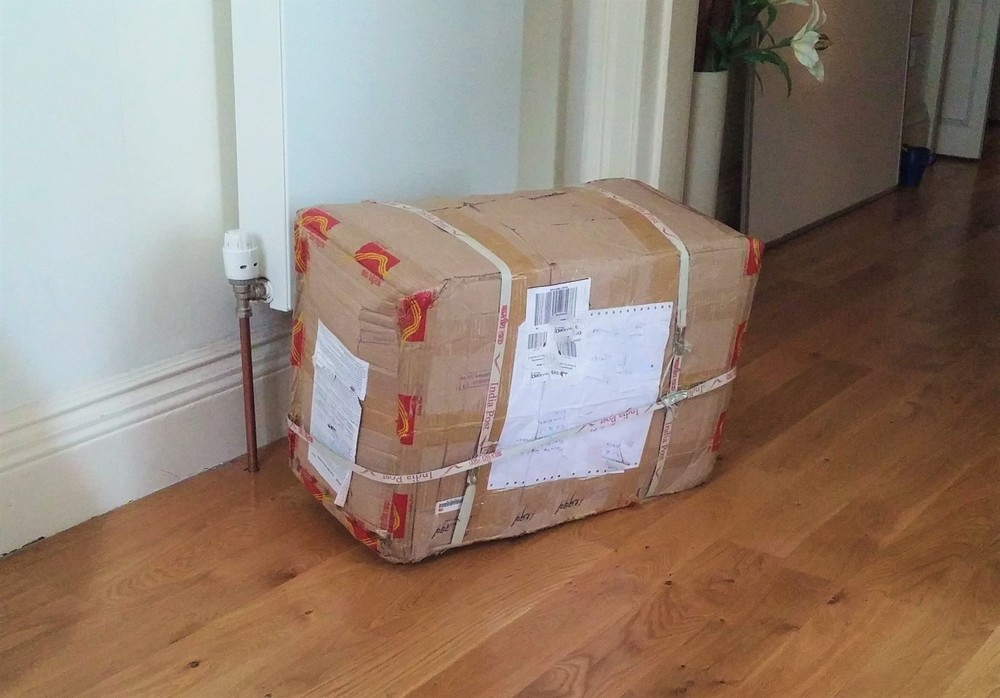 When we opened it, this box exploded in our living room and covered every single surface with clothes, footwear and food so I prefer not to share that gory image with you.

Irrespective of whose birthday it is, both The Husband and I get equal number of gifts because my father is mortally afraid of the fit I will otherwise throw if I get the teeniest tiniest inkling that they might favour The Husband more than me. My dad's the one who maintains the balance and controls my mom when she goes overboard while shopping for her son-in-law. My dad's my champion who might still love me a little bit more than the big teddy bear I brought home. But what he can't control is how The Mother presents it to me.

ARE YOU KIDDING ME, MOTHER?

Had I known that this was going to happen, I would have seriously reconsidered this whole marriage thing. I hear that it gets worse when you manage to squeeze out a tiny human from your vagina.

Anyway, The Husband couldn't be more pleased with this situation because he hasn't shopped for clothes ever since we got married. He has around 10 pairs of jeans threatening to explode out of the cupboard and his Indian colleagues often comment on how he wears 'Being Human' T-shirts to work since a) they're not available in the UK and b) none of them like Salman Khan. My mother was heart-broken to hear point b. But the interesting fact is that she keeps track of The Husband's dressing patterns and builds an estimate of his style, preferred colours, fit etc. So this time, she sent in a bunch of black shirts, along with some white and dark denim ones. She is now his own expert personal shopper who knows his style better than I do. Honestly, I could never walk into a store and get him something that he'd approve of, but my mother can.

But the highlight of this goodie bag however was all the food and snacks. Not only for us, but for our friends as well. Our house is filled with so many snacks that we don't have enough counter space or containers to store them in. We actually had to order food containers off Amazon to store all of that goodness. We were so excited that we did a lap around the living room in order to burn some calories before consuming all that food. Yesterday evening was so full of foodgasmic excitement that we even woke up feeling full and excited.

And isn't that just the best way to wake up? Thank you, Mum and Dad! When you said that you'd look out for me from whichever corner of the world you're in, I never imagined that you meant that literally :)