First of all, FUUUUUUUUUUUUUCK. This day started out so weird, that I'm this close to thinking that it's the day's fault and not mine. I realise you can't see the hand gesture I'm making by bringing my thumb and index finger very close to each other but you get the point. Last night, Shane and I slept by around 2 a.m, feeling pretty satisfied with ourselves after having completed all the work for this week's podcast episode. Shameless plug - it's going to be a good one. We marched into bed after finishing work with the intention of waking up in 6 hours and getting our Wednesday started. But for some reason, both our alarms didn't go off and at one point, I heard his panicked voice informing me that it was 11 am on a Wednesday, and we were still in bed. FUUUUUUUUUUUUUUUUCK! I mean, both our alarms have never stopped working like that before. Like I said, it's the day's fault, not ours. I would have said it's our phones' fault but blaming two perfectly functional phones seems a little unreasonable. Today is just one of those crappy, poopy, douchey days.

So on this crappy day, I want to share a story that will make you gag. I promise you that as soon as you read it, you will feel the urge to throw up your lunch and send me an e-mail imploring me to please STAHP with the weird stories. And yes, this one's a true incident from my childhood and if I'd told Shane about it when we met, he would have never stuck around with this creepy kid.

Last week on the podcast, I told you guys about the time when a woman sat a 7-year old me down and showed me pictures of naked men and women from an encyclopedia to "educate" me on the changes and developments that happen to the human body. She essentially gave me 'The Talk' but I was so not ready for that information. So not ready, that my brain completely blocked out that incident for the next decade and I only remembered it again somewhere in my early twenties. It's crazy how your brain does that for you sometimes.

Talking about that repressed memory brought back the memory of another incident that had been repressed by my brain till I was way into my late teens. And once I remembered the incident, I made all my friends uncomfortable by sharing it with strange enthusiasm. I'm happy to announce that now, you get to experience the gag reflex :)

From the age of around 2 to 4, I lived in Bombay (that's what it was called back then and I prefer to stick to that thank you very much) in a nice cozy apartment with my parents. Well, obviously with my parents, it's not like I could move out and be independent at that age, although I did ask them for an Instagram account on my 3rd birthday but they said no. Moving on, around that time, I had a special white mug that I used to drink from. Drink MILK from because the alcoholism hadn't set in back then. Now that I think of it, it was more of an ivory colour and was probably just a cheap plastic glass and not even a mug. While most kids fussed about Disney plates and cups, I obsessed over this plain cream/ivory/white plastic cup, the edges of which were frayed from my consistent chewing.

This was around the time when my dad used to travel a lot for work and quite often, my mom would have to single parent me through the week. On one such occasion, I remember our domestic help being done with mopping the floor as I sat around with my toys. This was also the time in India when proper mops weren't that easily available so people would just squat on the floor and manually mop with a rag and a bucket of water. So once she was done, she left the room to go looking for my mom. And in her absence, in that split second, genius Ankita raced to the kitchen, picked up her white cup, sat beside the bucket of the dirty floor mop water, picked up the rag, and wrung the dirty germ-stew into her cup. Then she consumed the whole thing in one gulp.

My next memory is of puking all over the place. It was immediate. I was rushed to the hospital, given a bunch of injections, admitted for a considerable amount of time, and put on a drip for dehydration as I was constantly puking and spraying stuff out of my little bum. Another distinct memory is that of orange juice. Day in and day out, the nurses brought me orange juice and for the longest time after that incident, I despised orange juice so much that I wouldn't even drink orange beverages like Fanta.

But let's just go back to the incident, shall we? First of all, why did I choose to wring the rag over my cup first? I could have just immersed the cup into the bucket to get the germy goodness. Also, I cannot imagine why I would want to do that to myself. What child does that? Seriously what the fuck, 3-year-old me? At 25, all I can come up with is that I must have been suicidal. I mean, what with all the playing and coloring and stress from kindergarten, I'm sure I guessed that growing up and adulting would be too hard for me. But what I cannot understand is, why did I decide to drink that thing? All I had to do to kill myself was dive into the bucket because I was too small for my age and would have definitely drowned in a bucket of water at the age of 2 or 3.

Just look at me on my second birthday. 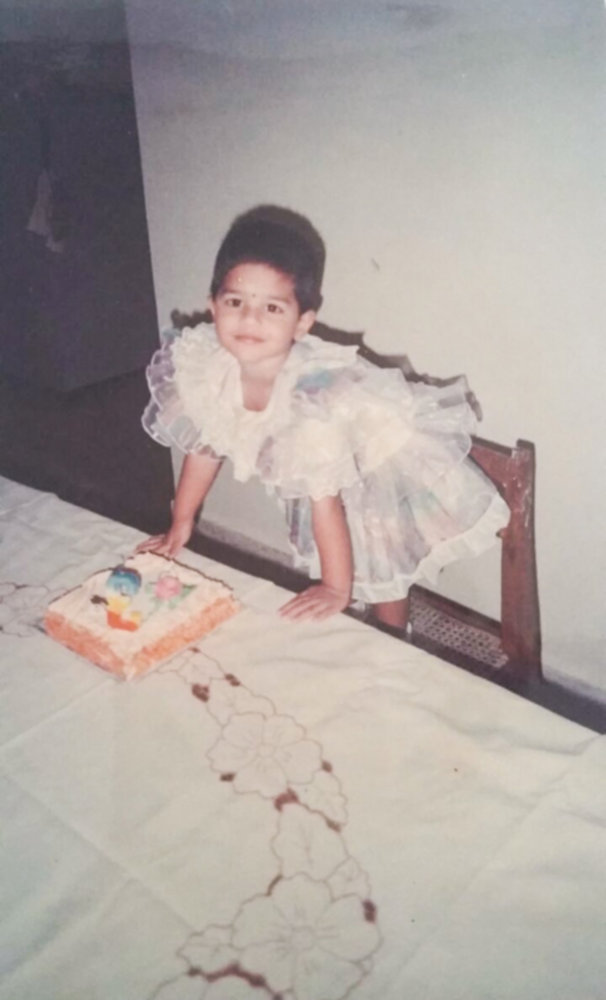 First of all, am I the only one who feels the urge to slap that smile off that face? Secondly, THANKS, mother and father for the hairstyle and the bindi on my forehead. Don't even get me started on the dress that kind of makes me look like a circus clown but I understand that was in style back then. But imagine, this is the little human who drank germ soup to kill herself, everyone. I don't know the motive behind the act but I'm sure she felt the way her future 7-year-old self did when a woman showed her pictures of naked men and women.

So there you go. I'm confident that I gave you a gag reflex but I do hope that you laughed with me and at little me.

Also, this is why I'm scared to have kids. They're just walking around town, looking for a chance to kill themselves. Those BEASTS!