The island of Spinalonga close to Crete is a tiny land mass that once used to be a part of mainland Crete. During the Venetian rule in the 1500s, the peninsula of Spinalonga was artificially cut off from the mainland for defense purposes and a fort was established on it. Later in the early 1900s (1903 - 1957) the island was used as a leper colony soon after the outbreak of leprosy in Crete. Till date, you will find Venetian and Ottoman architecture on the island but the heart breaking bits are the homes and the items used by the outcast lepers up until less than 60 years ago.

We visited Spinalonga on Saturday and hiked all the way to the top in flip flops and flimsy shoes only to realise that our bodies were in worse conditions than our footwear in terms of hiking capacity. We were not only out of breath but also aching all over after the experience. But the views from this tiny island were just breath-taking. Here are some pictures :)

The part where the peninsula of Spinalonga was cut off from the mainland: 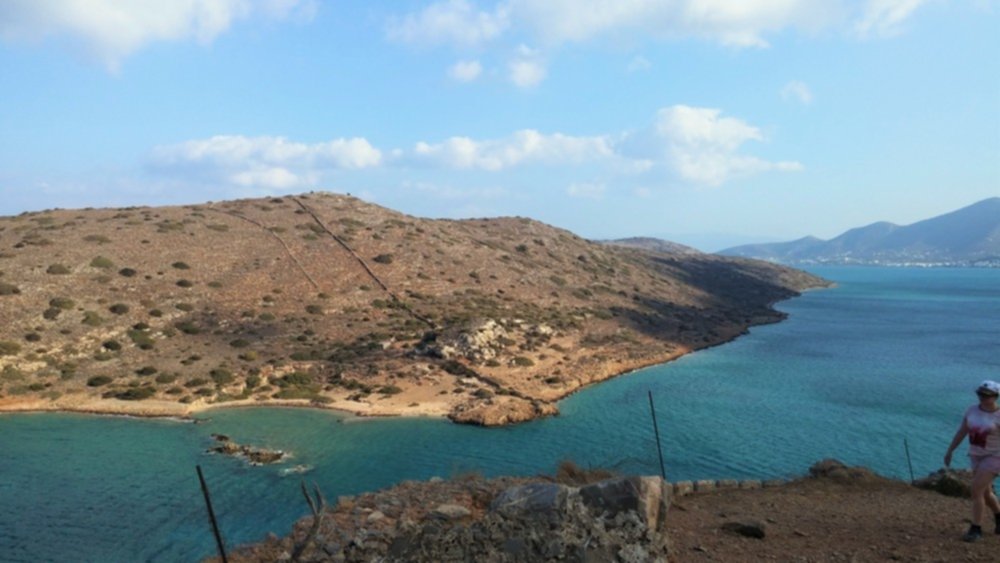 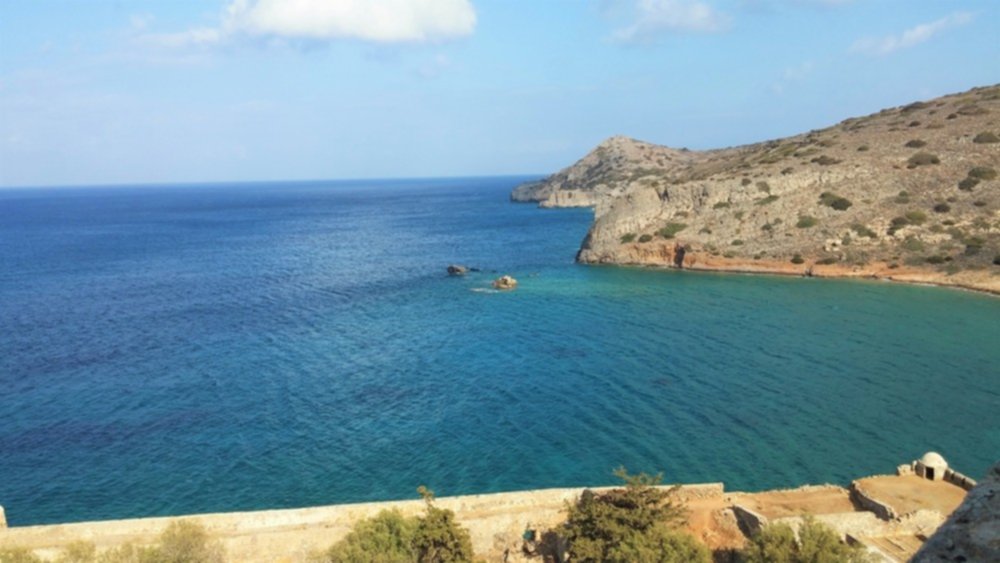 The trees on this island are mostly bent to one side because of the strong winds: 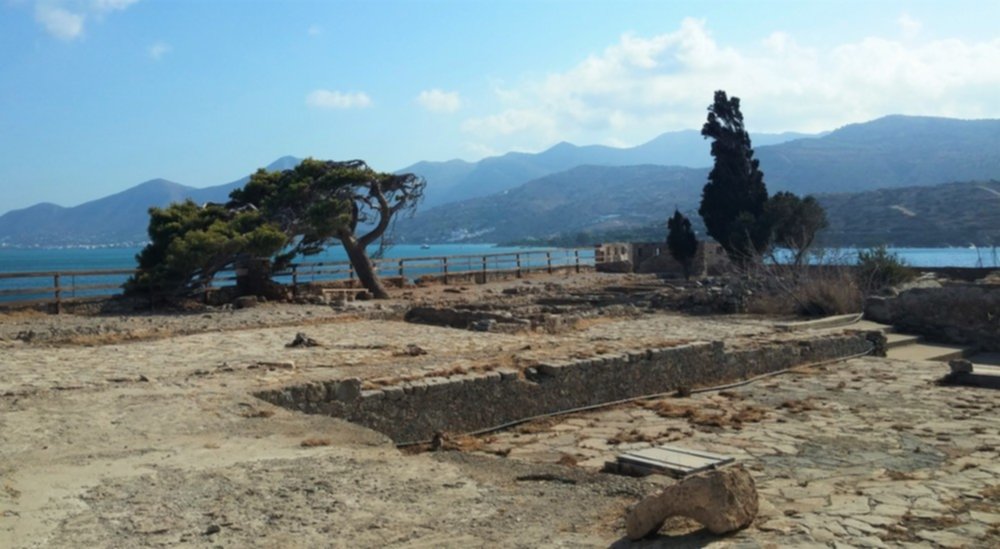 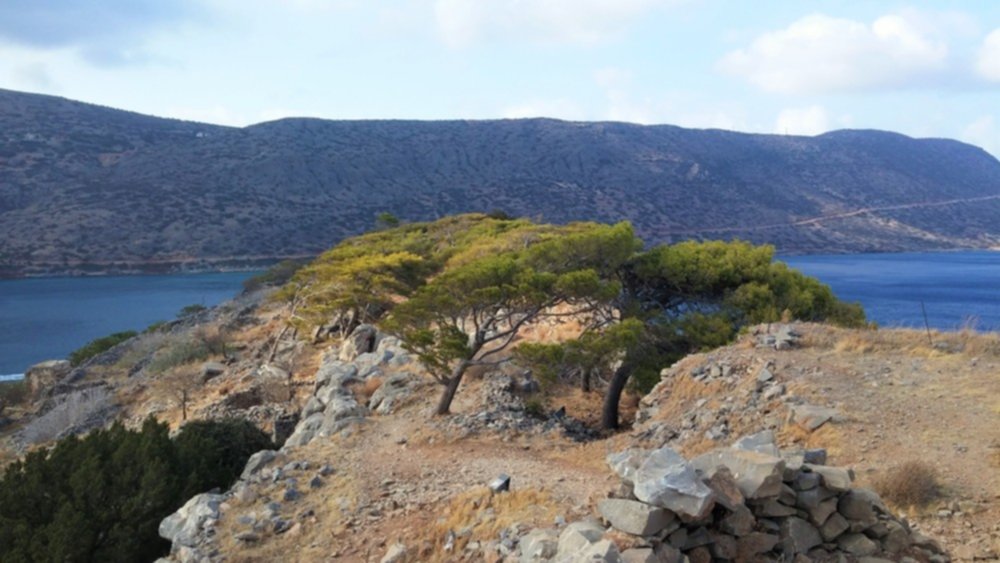 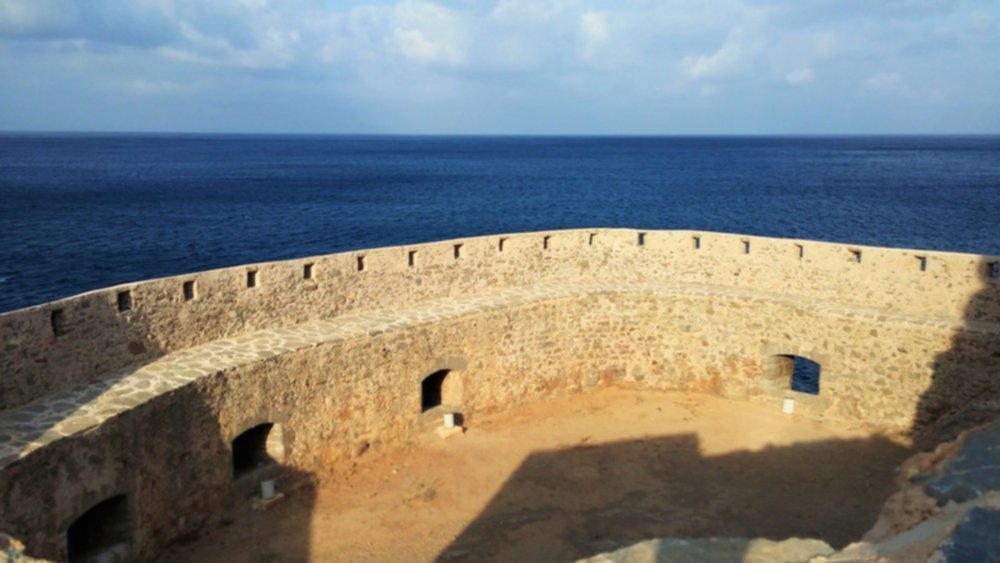 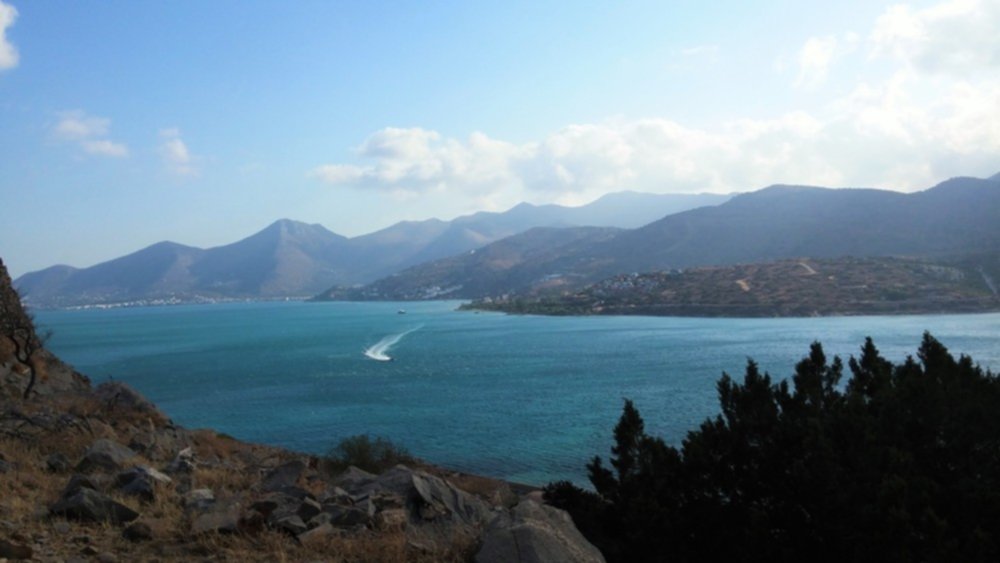 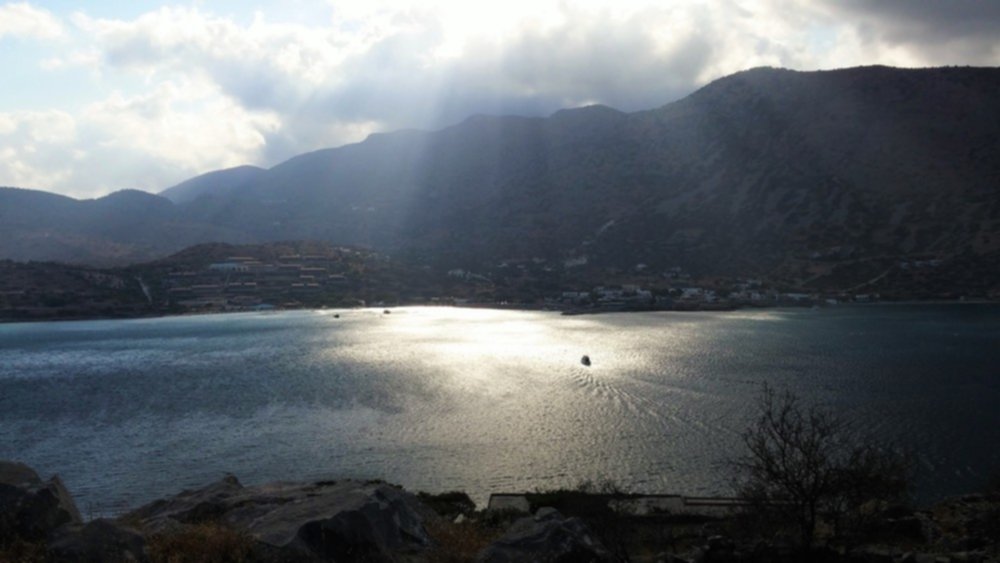 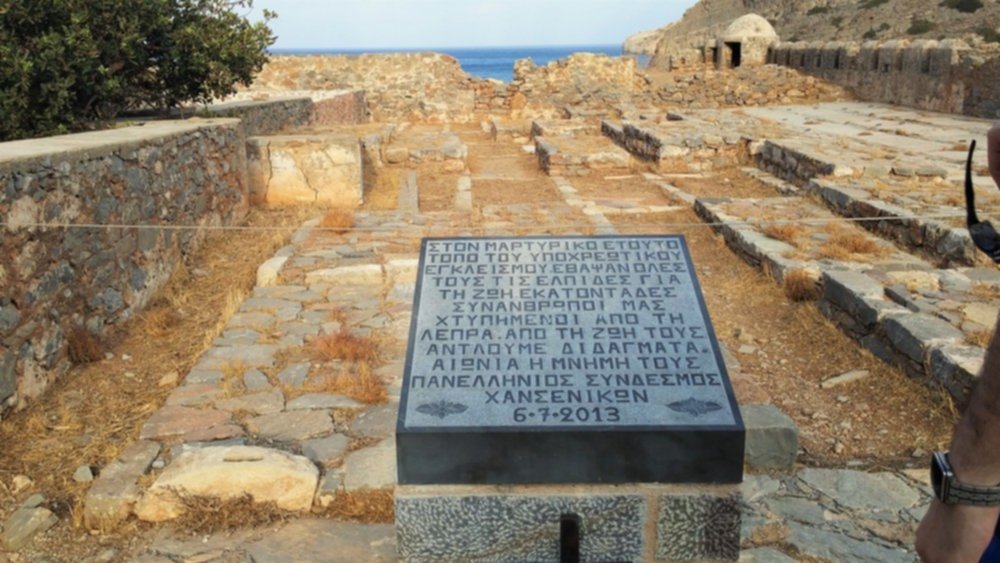 Frenemies being generally awkward around each other after The Husband added The Bromance into some Amazon service which basically lists us as a family unit. Now we share Prime -_-

Inside a gun hole in the fort that we were specifically asked not to enter: 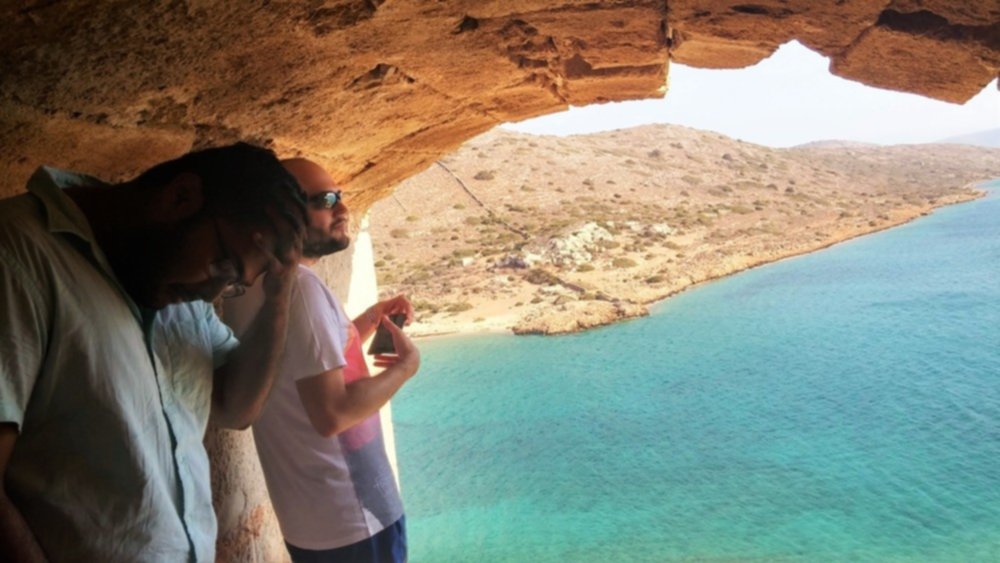 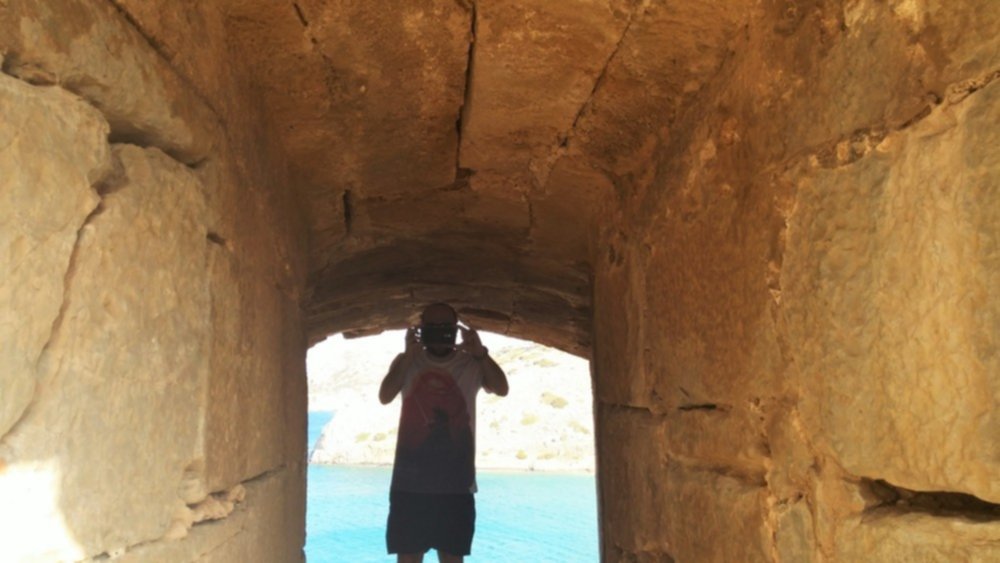 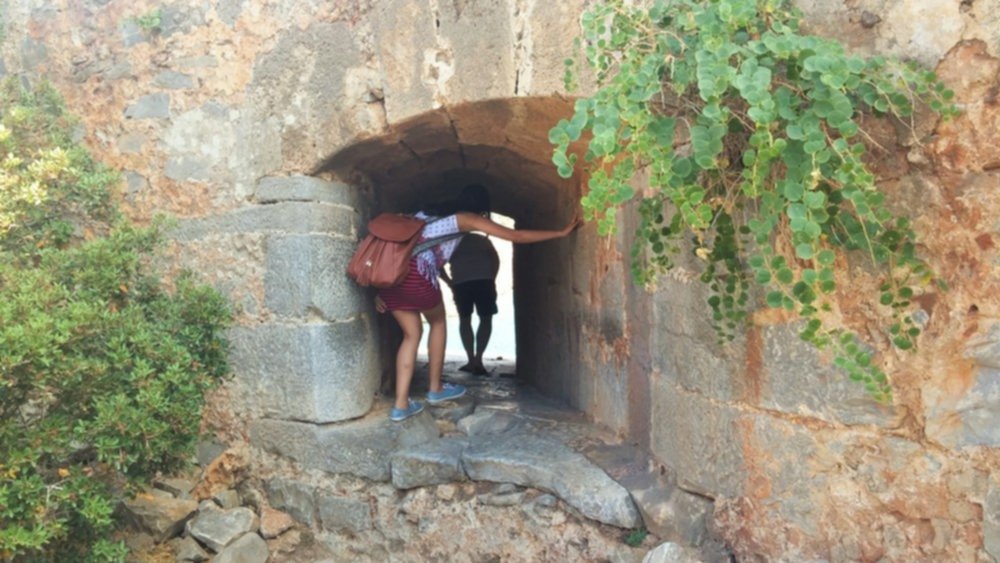 The part where we realised that The Bromance was scared of heights and didn't want to climb down steep stairs. He tried to crawl down them. And like good friends, we photographed his pain. 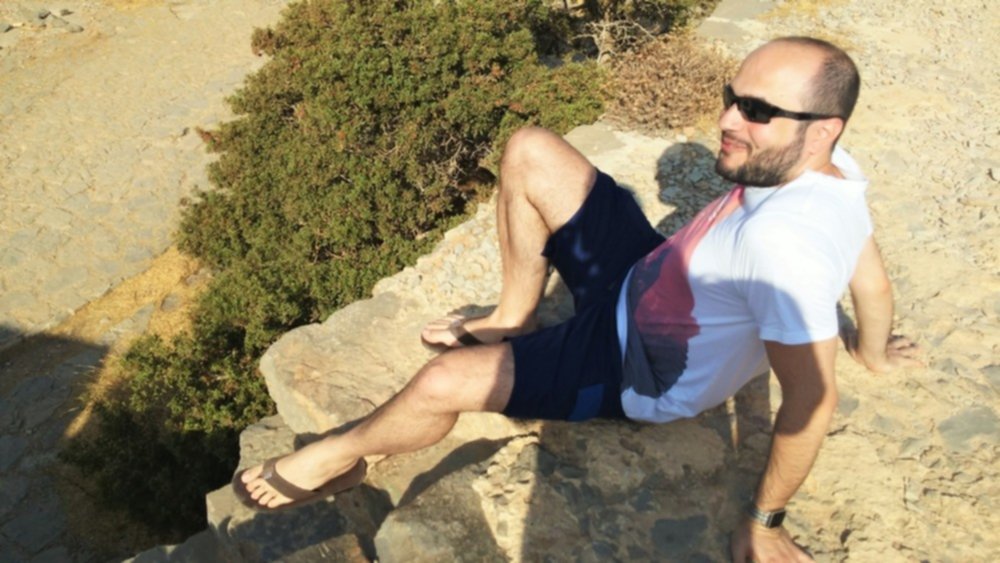 The best thing about this island is that it's completely uninhabited and even the people who work there for guiding the tourists and providing refreshments leave in the last boat back to the mainland at 7 p.m. So we noticed how no one really bothers to shut down the stores because chances are, no one's getting to the island once it shuts down. And even if you do decide to go over on the last boat, you're going to be stuck there with the spirits of angry Ottomans and Venetians and maybe even some poor ostracized lepers till day break, so good luck. As expected, The Husband, The Bromance and I were on the last boat back to Plaka after spending a considerable amount of time there when The Husband thought of a brilliant plan to swim to Spinalonga from Plaka after sunset just so that we get to feast on the goodies in the stores that never close. I asked him what the point was because we were headed straight for dinner anyway and he explained how his innate Indian-nes hardly ever lets him ignore the possibility of consuming anything that's free. Or in this case, stolen. But I think I should have you know that some of our friends from here have actually accomplished the feat of swimming all the way to Spinalonga from Plaka. You have to be good swimmers to be able to do that but you have to be exceptional swimmers to do that when you're high. Really, really high on...stuff. Oh, and in the dark. This is what happened: A year or two ago, some of these guys got high and thought it was a good idea to swim to Spinalonga because it was going to empty anyway. But once they got there, they realised that there was no way they were going to make it back so they stayed there giggling for a while after which, someone on the shore back in Plaka realised that "Holy fuck! Those guys swam all the way there and aren't back yet so they're either missing or dead!" and a search party on a boat later found them safe and high on the island. If I knew how to swim (swimming like a tadpole doesn't count), I'd be on that island in the middle of the night giggling at the imaginary ghosts of angry Ottomans. I know this in my gut. So thank God for all those times when I climbed on my dad's back, refusing to swim, and giving him instructions to go from point A to point B just to amuse myself.

Once we got back, I told The Husband how the whole concept of getting abandoned on an uninhabited island reminded me of the movie 'Kaho Na Pyaar Hain' and he said "Oh, the one in which that woman had to literally be the last woman left on earth for him to start paying her attention?". And there goes another one of my favorite childhood Bollywood movies. Destroyed in one sarcastic sentence by the idiot who doesn't understand Hindi.

On that note, goodbye :) Sorry for being m.i.a of late. In the past three days, we had strong winds here in Plaka and the wi-fi was acting up. Also, I learned that I hate strong winds, especially the ones that sound like they're coming for me. When I was a child, my parents lied to me that if I didn't finish what was on my plate, "Dullie" would come for me and take me with him. For some reason, I associated Dullie with strong winds and I learned of this association only recently at the age of 24, while being stuck in an airbnb apartment that's lodged right in the middle of the ocean and the mountains, hence making the sound of the wind even scarier. I was heard whimpering like a puppy in my sleep. Thank you, mom and dad -_-