Last night was...long. It was one of our friends' birthday and a group of around 20-25 people sat together in an outdoors cafe after joining round and square tables together right in the centre of the cafe in such a crooked fashion that the waiters had a difficult time serving other tables. They actually had to go around the cafe, as in around the perimeter of the property to serve the other tables. But they didn't mind because this group has been frequenting this place every August for about 10 years now. And because it was the birthday of one of their favorite customers, they even provided quite a lot of free booze. So you get what kind of a birthday party this was. And for some reason, I was the only sober person at the table. When they brought out all the local Raki and shot glasses, and when everyone was saying "cheers", and when I didn't have a glass in my hand, and when the birthday boy asked me why I didn't have a glass in my hand, and when I politely said "I won't be drinking tonight", around 20 heads turned to stare at me like they'd just seen an alien. But long story short, I was the only sober person at the table who thoroughly enjoyed watching the drunken shenanigans of especially The Husband and The Bromance.

The birthday boy had a birthday goal of breaking his previous record of 19 shots this year. The Husband and The Bromance for some reason decided to give him encouragement through their participation in the record-breaking process. In the end, by around 3 a.m, the birthday boy was at 21 shots and refusing to get up from his seat, The Bromance was at 22 shots and had the buttons on his shirt completely messed up (don't really know what happened there) and The Husband was at 23 shots and performing miracles. Quite literally, because a girl challenged him to walk in a straight line while touching his nose with alternate hands and he did it like a pro. Like he was born to do just this one thing at the age of 24 in a remote village in Greece. And trust me, you wouldn't believe it if you saw him then that he was down 23 shots. So what does he do next? He walks up to the table and says, "23 is a SHIT number. I need to fix that RIGHT NOW" and downs two more shots in one go. He told the birthday boy that he did it for him, because it was his 25th birthday and then he took a walk to "test" whether or not he could walk anymore.

By 4 a.m, we were on The Bromance's cousin's roof where the birthday boy decided that it was a good time to brush up on his martial arts skills. So while all the others sat on patio chairs, the birthday boy and his wrestling partner entertained us with a background score of deep, almost sexual, grunting noises. The best thing about that rooftop however, was this little charmer called Peri: 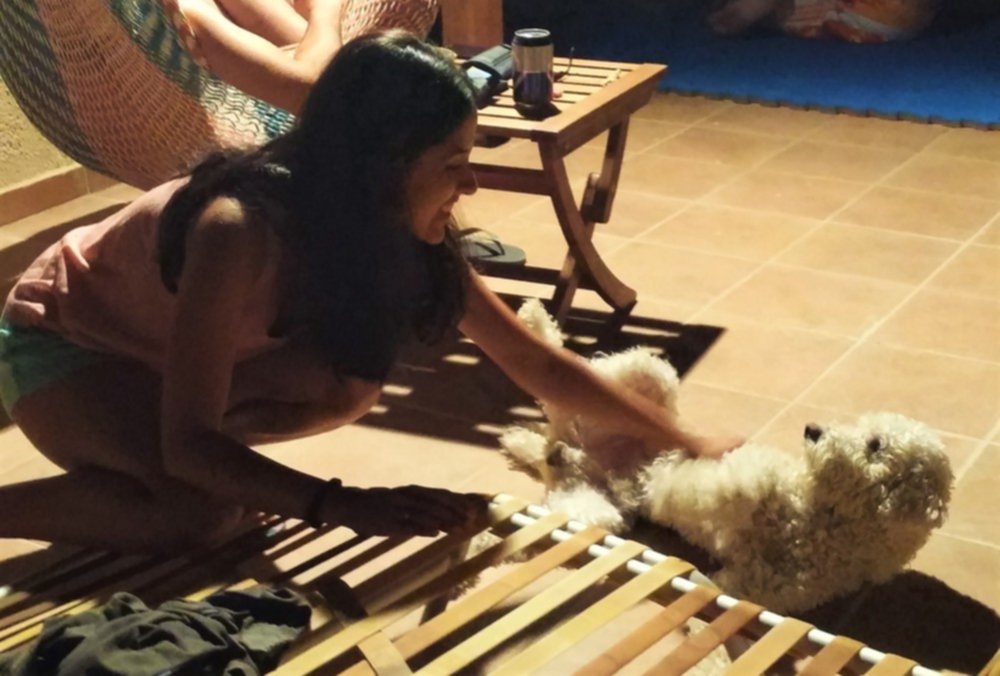 He's the most adorable dog in Crete because he was the first one to not completely ignore me. I'd come this close to believing that I'd lost all my dog-charming skills until Peri happened. This one was kind to me. He showed me the meaning of love, and all was good again. And then The Bromance had to come and ruin everything. He stalked the poor dog like a predator and while the birthday boy was wrestling his partner, The Bromance started wrestling the poor dog. Side by side. At one point he even pulled the dog close to him and tried to snuggle him to sleep because he "loved" the dog so much! Yeah, that was probably the last we saw of Peri.

Around 4:30 a.m after people were done wrestling and boxing (because after martial arts and dog-bullying, The Bromance and the birthday boy started boxing each other!), The Husband and I decided to take a walk. Except, by then, all that alcohol had taken quite the effect on The Husband and he began hugging everyone, telling them that he loved them. Once we were on the street, he insisted on going to the beach and lying on the beach chairs to gaze at the stars. So there we were at 5 a.m, on the beach, with the water looking nice and blue even in the dark, and with the clear skies expanding all around us. That's when I saw it. A shooting star, I thought at first and drew his attention to it. Then we saw another. And another. And then we remembered. It was the annual meteor shower and we were witnessing it on a beach in Greece at 5 a.m while The Husband was high out of his mind. Obviously, I spotted most of the "shooting stars" and he kept asking me if I'd clean his glasses for him "please?", and after I was done cleaning them, he'd still complain about how unfair it was that some people had to wear glasses during meteor showers. It was the most unexpected thing for us to witness and it truly felt like a little surprise from the heavens. Probably a sign that they'll let me in if I continue trying to be a good human being just so that I get to taste the food in Heaven.

Later, after he was done marveling at "That One!" and "THAT ONE!!" and stopped exclaiming, "Woaaaaah, did you SEE that one?", he turned to his side to face me and started blabbing all kinds of non-sense. I was cool with it for a while because he was drunk, but then I asked him to "Shut up and look at all the stars! You won't see this again for a long time". And you know what he said to me? He said "But you're my star! You're the biggest, most beautiful star and I only want to look at you. Also, I'm allowed to be cheesy and make you uncomfortable when I'm drunk. Also, this is a secret, so don't tell anyone I said that, it's too cheesy eww". So when we crawled into bed at close to 6 a.m, I whispered into his ear, "I won't tell anyone, sweetheart! I'll just write about it on my blog", and kissed him goodnight.

Have a happy weekend, everyone! :)