When I think of 2017, the first thing that comes to mind is how Shane and I rung in the new year. And if someone were to tell me that we celebrated our second Hogmanay on the streets of Edinburgh, watching the brilliant fireworks from the base of the castle and kissing at midnight just a mere three days ago, I'd totally believe them. I don't know how 2017 flew by so quickly.

This year, our festivities were pretty low key starting with a movie date with the family on New Year's Eve followed by dinner and a frantic scamper up steep metal stairs to the uppermost balcony at Shane's parents' home to watch the fireworks from different parts of Trivandrum city. On New Year's Day, we went over to my parents' home and simply hung out together as a family, feasting on great food that my dad could barely taste. Heavy medication tends to do that to your tongue and tastebuds sometimes.

My father has another two and half months of complete rest and recovery to look forward to until he can start getting back into normal life and perform basic functions like bathing on his own, driving, and stepping out of the house. A further three months following that could ensure relief from pain in his legs (both of which were cut open at different parts to find strong arteries that could be used for the seven grafts in his heart) and an almost complete recovery. In a year, he'll be much stronger and healthier than he ever was in the past decade. In a year, this pain wouldn't matter.

One question I have always asked myself since Jan 2017 is: 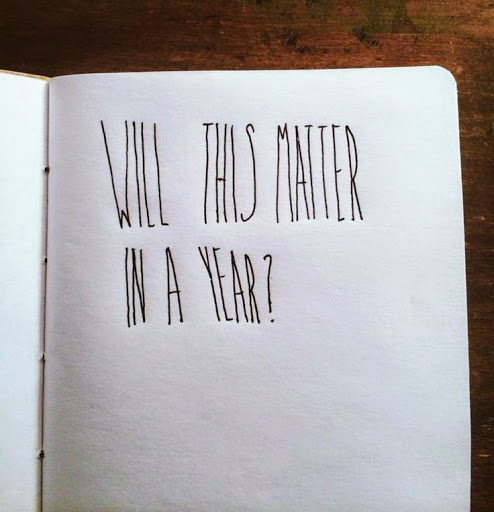 Because it was around that time that I realized that things that upset me around January of 2016 were of no consequence to me a year later. As soon as this began to sink in, I told myself that I would only revisit annoyances from 2016 in 2017, and until then, I wouldn't spend even a single waking second dwelling on things that were imminently gnawing away at the back of my head. The minute they resurfaced due to unperceivable triggers, I made it a point to immediately distract myself by switching the task at hand with something preferably physical in nature. It's been a pleasant discovery that every single one of those problems and annoyances doesn't even exist anymore. When I remember some of them, I remember lessons but never pain or frustration.

I needn't re-emphasize the power of time by repeating something that generations of our ancestors have been saying. However, as I tread carefully into this new year, I wish to remind myself of the lessons learnt around the same time last year, some of which have exponentially improved the way I live my life day to day. By sharing this with you, I'd also like to wish you a happy new year albeit a few days too late, and I truly hope that by the end of this year, you too manage to nonchalantly shrug or even better, laugh, at whatever might be troubling you today.