Turns out that The Husband didn't realize that his phone was missing, after all (Click here for the whole story). When I sent him the link to my previous post after I published it on the blog last Thursday, I had one of my many Butters' Professor Chaos moments. At least this little fellow ends up looking cute while he fails to wreak havoc: 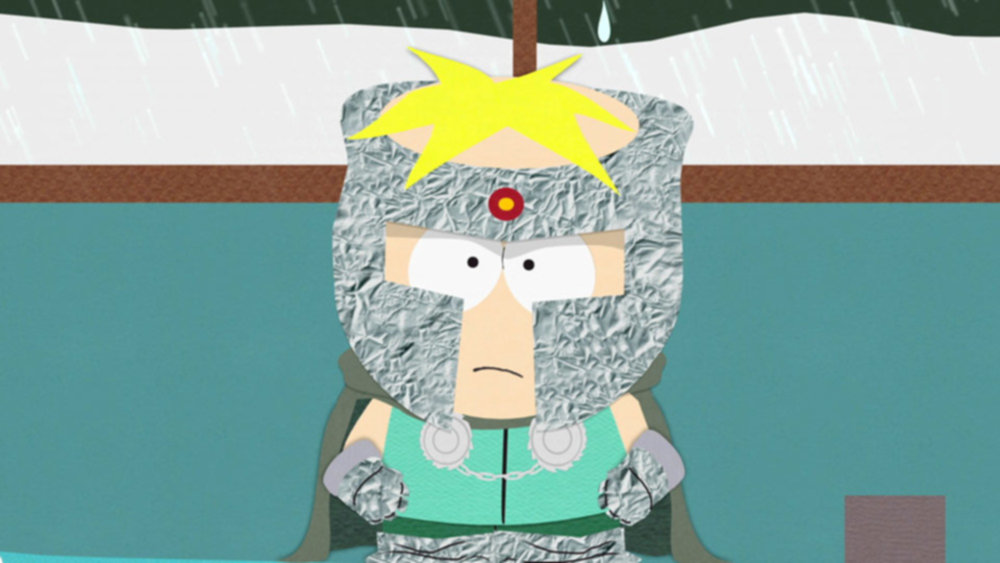 I didn't even get so much as a response in reaction to his discovery. I'm pretty sure he just did the "shrug and meh." and carried on with his work.

As I walked to his office that evening to pick him up for a dinner date we'd planned with friends, I was quite awed by the way the whole city had (in a way) shut down in preparation for the celebrations that night. I knew that Edinburgh celebrated their Hogmanay (a Scottish -pagan?- festival to welcome the New Year) in style for over three days with street parties and torchlight processions in the middle of the road and had even made it to the Guinness Book of World Records one year for hosting the biggest New Year celebration of the world, but this being my first year in the city, I was surely in for a shock. Entire roads were sealed off and the traffic completely disappeared just because more than a hundred thousand people were going to roam the streets that night, drinking and spreading festive cheer. The "drinking" part was fascinating considering how many stalls had been set up along the sides of the roads to serve alcohol all night long. The whole city had a concert vibe to it and when I say whole city, I mean the whole freakin' city! I could not have ever imagined the scale of this celebration just by reading about it.

And smart as we are, we decided to have Chinese for dinner (because WHY NOT?) instead of roaming the streets and eating from random stalls. To be fair, Chinese food from this particular favourite restaurant of ours (which by the way, was specially commended by even Gordan Ramsay as one of Britain's best) is always a good idea. And what's more, we even had their special Christmas dinner coupon which promised an unlimited supply of their very best dishes straight to our table. Time flies when you have good food and good company and we ate and ate and ate till I felt like Jabba the Hutt and in my mind's eye, ended up looking like this: 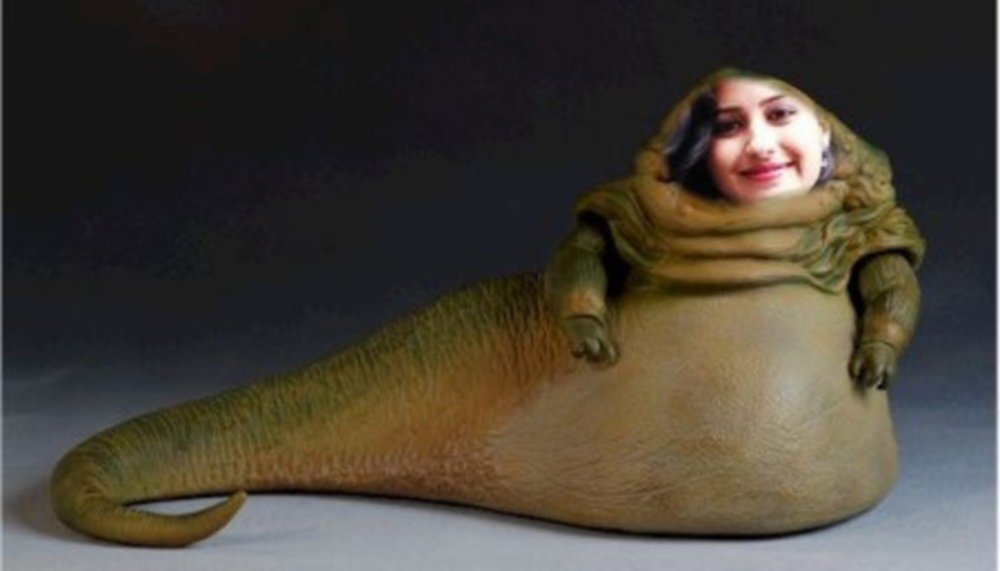 Don't you just want to slap that smile off my face? I sure do. I always get this urge to slap the kids (and in some cases, even adults) who smile in pictures looking all cute and innocent. Those pictures scream "Miss Goody-two-shoes" and I just go slap slap slap in my head. Where are all the badass kids of the world? Badass kids rule! Also, don't you think my photoshop skills are just amazing? Couldn't be more proud.

Post dinner, we decided that we wanted to get the best possible view of the midnight fireworks although none of us had taken any prior interest or active responsibility of planning for it. The Husband, for a change, broke out of his "indifference spell" (but still did the "shrug and meh.") before proclaiming that he was going to take us to his Office rooftop which had the perfect view of the Castle. And since the fireworks commence from the base of the castle, it seemed like the best plan ever. Except for one tiny detail. We had exactly 20 minutes to get to his office, and since all the roads had been sealed off + were swarming with a million drunk bodies, we had to take the longer route over a bridge (also overlooking the castle) to get to his office. No cabs, no cars, nothing. Just plain old tiny feet and 20 minutes on the clock. One thing I will never forget about the night is how we ran through the beautiful streets of Edinburgh, with hoards of drunk people screaming "Happy New Year" to us, albeit the fact that our full stomachs and unfit bodies were screaming in protest. I could hear my body telling me, "Hey, remember those fried and steamed dumplings that you just gulped down one after the other less than an hour ago? Well, two of them are threatening to burst out of your right inner thigh and the rest are acting chaotic in your left ass cheek. You're so not in good shape, you little shit!".

With merely three minutes remaining till midnight, we were stuck on the very bridge that we had to cross to get to his office. It was so full of people that I had to stand on The Husband's toes to gasp for breath (just exaggerating as usual although I did stand on his toes, just for the heck of it). And from there, we watched the midnight fireworks, so beautiful in their entirety, and the bridge turned out to be as good a spot as any for watching the show. Thus, we welcomed the New Year with lights, fireworks, and drunk people singing the Scottish anthem but being generally civil in a very drunk manner. And before I could turn to our friends to wish them, a nice old man started chatting with one of them, asking him where he was from, wishing us all peace and love, peace and love to all, love to Scotland, but "Not to them British folks 'cause Fuck the British! Fuck 'em all!". And then our friend showed us to him and said, "They're Indians, so they should know.". Oh, good old Scottish Nationalist Extremist! No comments on his extremist comments but he looked like a very nice (badass) old man in a general sense. I'd totally hang out with him :)

And from there, instead of taking our friends to our apartment which was a mere 10 minutes away, we walked 30 minutes to get to our friend's apartment. What compelled us to make that decision? Let's just say it might have been all the "Hare Rama Hare Krishna" dancing on that side of the road, with people in orange dresses and sarees distributing Indian sweets and dancing with the hoards of drunk people from all parts of the world who had gathered on that very same bridge to watch the fireworks. And what did we do once we walked all the way to our friend's place? We watched shitty anime with lots of boobs. I don't even remember the name of the anime, but I remember it was shit and had boobs everywhere.

When the Husband and I walked back home at 4 a.m on New Year's day, we couldn't help but pride ourselves in being the only sober people out on the streets and hence, way more alert than most others. We were clutching on to an iron baseball bat, pepper spray and a mace to fend off weird drunk people if need be, but found that the streets looked almost exactly the same as we'd left them. Mostly happy drunks everywhere! What a happy world! We witnessed only two fights and those were just the verbal kind where the loudest drunk person always wins. However, I had my share of a jump scare when a girl came and placed her hand on my shoulder. She looked like she had no idea what was happening but her friends were not too far behind. She was teary-eyed and clutching a water bottle and tissues so I'm guessing that she threw up right before she decided to strike up a conversation with this random stranger. All she said was, "Isn't this literally pathetic?" and I couldn't help but smile and move on. But to that girl, I'd have liked to say, "If you're talking about yourself, then no. It isn't pathetic. You look beautiful and seem to have had a hell of a night. You might not remember most of it when you wake up tomorrow but you might wake up with a hangover. But that's okay. Hangovers are just reminders of a terrific night. Stay happy! But if you're talking about me, then (shrug and meh.) it might be a little patheitc. I'd also like to wear the kind of skirt you're wearing but I come from a tropical part of Southern India and don't seem to be as resilient to the cold as you are. Also, I had to do a lot of running tonight so thank God I didn't wear heels.".

The next morning (New Year's Day), something interesting must have happened in the world but we wouldn't know. We missed the entire morning and slept in until 1 p.m. I wasn't drunk and dancing on the streets the night before but I ended up with the weirdest hangover in the world. I decided that I had had too much excitement for one night and that I wasn't going to socialize again for another year. I refused to shower, cook or even move from the couch. My bums had been mentally semi-permanently glued to my not-so-comfy couch from where we ordered three meals, didn't do the dishes or dispose of the used food packaging and stayed up for exactly 12 hours watching Star Wars and other random shit on TV. The previous night had been too maaaaaach for us and we felt very, very old admitting this to ourselves.

And if you're wondering why I wrote this chatty 1807 word post on my first Hogmanay, you should know that I wrote it for myself. This is my first post of the year and it is entirely for myself. Dear Ankita, lots of love, hugs and kisses from Ankita :D

I know that people don't read as much as they used to and that this post could very well be found boring by a lot of you folks out there (who don't have the patience to read anything exceeding 300 words). But this long, chatty post is for myself as I wanted to document this experience and this story which was screaming to be told. I couldn't even function properly during the weekend as this story kept gnawing at my brain, asking to be brought to life. It's going to be difficult to wipe this experience from my memory because it was that unforgettable and magical to me. But God forbid, if something were to happen and I were to lose this cherished memory, I wanted to be able to come back to this and smile about how dumplings almost burst out of my thighs and ass cheeks. Moreover, I can read and read and read all day long so a long post like this is like Christmas on a webpage to me.