The internet is full of opinionated idiots like myself. We, as a clan, have something to say about everything. When I read an opinionated post somewhere, I quickly form an opinion on the post and person who posted it, and move on. That part is easy. When I see a silly post displaying sheer ignorance, I laugh and pray for the poor soul who is being mocked by the thousands of people who have read it and are mostly polite enough to not comment on it and destroy their very will to continue living. In some extreme cases, when someone puts up shit that is ignorant as well as offensive, I just turn up my swagger to the maximum, put on my shades and send mental middle fingers to the person who posted it:

But at the end of the day, I choose to ignore everything and move on with my life. I write about everything that affects me and keeps me awake at night while The Husband snores away. I write opinionated posts myself, calling out other people's bullshit (as I have done here). But never have I ventured to consciously and actively take any steps to piss off and offend a person or a whole community. However, when I come across a complete dickwad, my hand twitches with the realisation that it's missing a shotgun that would blow up his/her Inglorious Asshole. My brain suddenly screams, "DUUUUDE! You've gone too far. TAKE IT BACK, BITCH!". And hence, for the first time, I shall bring to the attention of my lovely readers, the existence of complete dickhead whose name occasional comes up on my news feed. He went too far and managed to piss me off to the extent that I had to break my new year's resolution of practising the art of shrug and meh.. 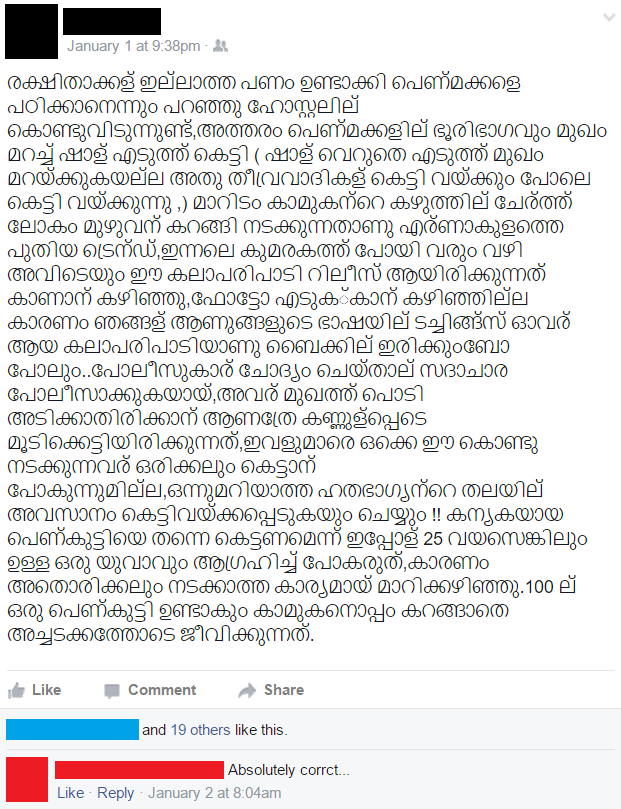 This is how this douchebag decided to start his New Year. With an offensive post in Malayalam which I shall translate for you here:

"Parents and guardians spend all the money they have (or don't have) to send their daughters to a hostel so that they may receive an education. These girls cover their faces with a shawl (they don't merely cover their faces, but tie the shawl around their heads like terrorists), press their chests to the necks of their boyfriends and roam around with them. This seems to be the new trend in Ernakulam (a city in Southern India). Yesterday on my way back from Kumarakam, I happened to witness a similar show again, but unfortunately couldn't take a photo because even in the language used by us men, the show put on by them seemed to involve "too much touching" (colloquial, untranslatable - a lewd way of implying that the girl has been 'dirtied' by the boy), even while they were travelling on a motorbike. If the police were to question them, they would be branded as Moral Police, and the girls would lie that they cover up their entire faces, including their eyes, to protect themselves from all the dust and pollution. The guys accompanying them are most definitely not going to marry them. And finally, they will be made to cling on to the necks of some poor, ill-fated, innocent guys. No man over the age of 25 should wish for a virgin bride in this day and age, because that seems to be an impossible feat to accomplish. There could be just about 1 girl in 100, who lives a decent life devoid of boyfriends and everything that follows when you have one."

Malayalam is my mother-tongue and first language but owing to the fact that I spent most of my formative years in North India, I didn't get an opportunity to be formally trained in the language. Hence I am a fluent speaker but a self-taught reader. Some of the essence of his rant has been unfortunately lost in translation. I couldn't bring out the level of scorn and hate towards women that is embedded in his writing or even the vulgarity of his expression in terms of a woman's chest pressed against a man. I don't know if he wrote this himself or simply pasted something written by another. But one thing we can all see is how this is more of a hate campaign than anything else. And guess what? Assholes come with cheerleaders. I can't help but wonder about the losers who encouraged this stupid, ignorant, uncivilised piece of shit. Notice the idiot who commented saying, "Absolutely corrct..."? There's a special place in hell for people like them (I think).

If anything, I find it disgusting that girls (and even boys) have to be so secretive about their relationships and have to go to the extent of hiding their faces behind shawls and the like. But then again, I have female friends who ride two wheelers and they do, in fact cover their faces in the ways that he has described, genuinely because of the dust and pollution.

The man who wrote this is, believe it or not, a reasonably young TEACHER and a father. We all have such high regard for teachers because we expect them to be well read, broad minded individuals who will help their students grow. And then you see that a person like him has the license to walk into a classroom to influence a bunch of confused young adults, to treat his female students with scorn as they are all sluts for having boyfriends and have most likely lost their precious virginity to people who won't even marry them, to feel sorry for his male students who will perhaps not get to marry a virgin bride, and to completely ruin any sense of respect that his students have for themselves or for one another. Majority of his followers on social media are his own students who quite possibly look up to him, because that's how young students are. And this is what he sends out to those minds that are easy to mould at this stage.

An opinionated teacher is okay. In fact, having an opinionated teacher is a wonderful thing, as long as he/she is progressive enough to engage you in a conversation to discuss why your own opinions may vary from his/her's. But an opinionated chauvinistic CUNT is not what India needs today. We have had many of them in the past but this needs to stop NOW. Stop destroying and poisoning the minds of at least the younger generations. Let them GROW, you motherfucking asshole!

If I ever find out in the future that my kids have a similar dickwad for a teacher, then so help me God, I shall roam the streets with my shotgun, hunting him/her down, blowing up faces, dicks or vajoojoos, depending upon the seriousness of their crimes (just realised that vajayjay is okay but there's no angry way to vajoojoo. Shit.).