Remember the time when Shane woke me up twice during the night (once while it was still pitch black outside) because his phone had died and he was certain he was late for work? You can read all about it here and when you're done, you'll see that I had made a promise to you.

And all this happened after a rather exciting night, one that I promise to write about very soon.

Last Wednesday, Shane went out drinking with a couple of his friends from work. He was wearing a new pair of shoes that we discovered soon to be lacking in proper grip, and one needs to wear proper shoes in a city like Edinburgh where it's wet most of the time on top of being covered in cobblestones. The night he went out with his friends was an especially rainy one even by Edinburgh standards. So when I saw that the rain was getting worse and remembered that he wasn't wearing the right shoes, I sent him a message asking him to be careful. 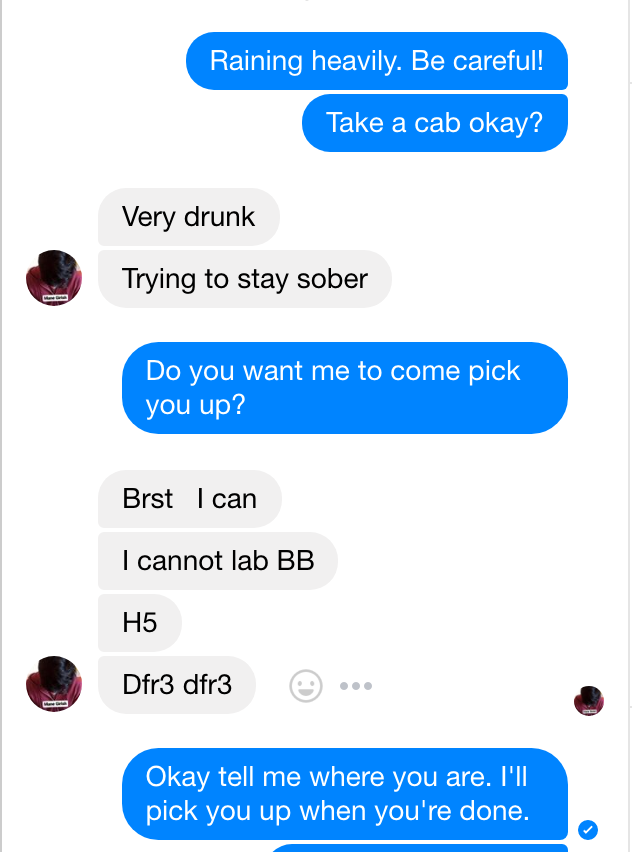 This is where I remind you that Shane is quite a good drunk. A sturdy one. Years and years of experience from his first year at Uni has got him to a point where he starts feeling drunk only by his third glass of wine. Not to mention that time in Greece when he drank 25 shots of almost pure alcohol on a friend's 25th birthday, and walked in a straight line while touching his nose with alternate hands when someone challenged him to do so.

In all these years that I have known him, I have never seen him puke. No matter how drunk he gets, he just wakes up drunk the next morning (not hungover, but actually drunk) and eats a lot of food to get over it. There was this one time after our engagement party when he was so out of it that he told his parents he didn't want them to drive him home. I heard that he puked a lot that day although he maintains till date that it was because his parents forced him into a moving vehicle. It was right after this photograph was taken and my mum had no idea her son-in-law was on the verge of throwing up in her face: 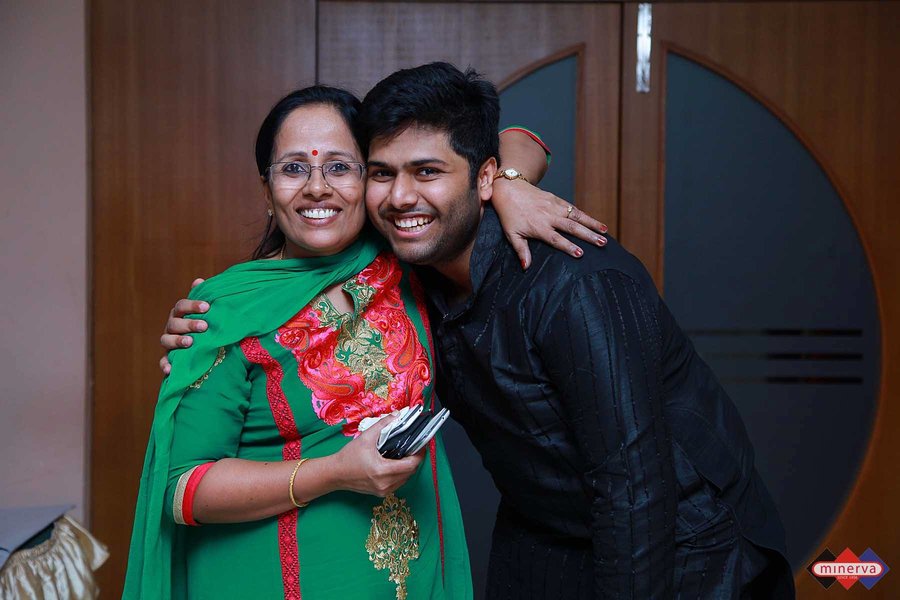 The other time he threw up was at our wedding reception. Shane's logic was - I'm paying for all this alcohol so I might as well try everything.

Yes, he mixed his drinks. He broke the most important rule in drinking and kept disappearing from time to time because he had to shove his head down a toilet. My poor dad had no idea where his son-in-law's face had been minutes before this happened: 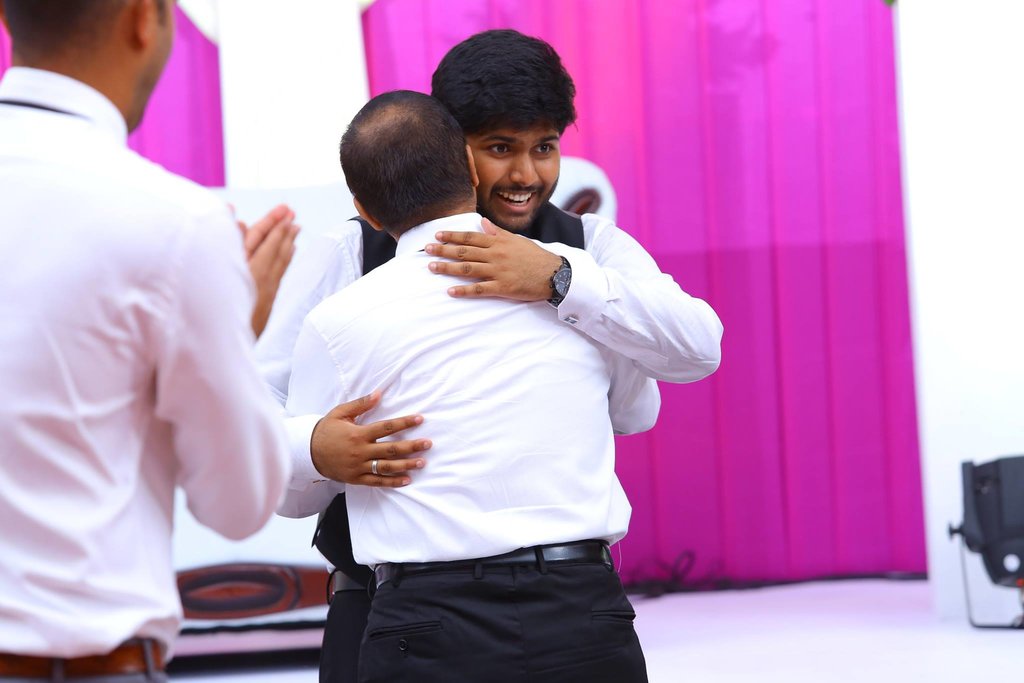 But all said and done, I, in all my roles over the past few years as his girlfriend, fiance, and wife, had never seen him puke until last Wednesday. In these past years, Shane has really cleaned up after me. He has cleaned red puke from the insides of our Airbnb host's cupboard, puke from our toilet, and once, he even carried me piggyback when I was in heels and incapable of coordinating my limbs. I always felt like I wasn't adult enough because I had to be taken care of from time to time whereas I never had to do the same for him. Which is why I'm sure you can guess how excited I was to be able to unlock this marriage milestone finally! Also, as it turns out, all my experience as a "patient" turned me into quite the caregiver because I could predict symptoms and do the needful to avoid certain situations. That's when I started keeping score.

On Wednesday evening, after that gibberish that he sent me, I called him to find out where he was and what he was doing. If he was getting dinner, I was going to let him finish eating because God knows that someone who texts like that needs food in his system. As it turned out, the minute he heard my voice, he decided that he wanted to come home, and paying no heed to my pleas to stay right where he was, he started walking home. He started telling me things like, "I'm feeling so brave, I'm coming home" while I kept repeating that he shouldn't cross any roads.

He crossed a bunch of roads.

By the time I started running to meet him where I knew he was, I could already make out his silhouette in the distance, inching his way towards me, one calculated step at a time. As soon as he saw me, he forgot that I weighed as much as his left thumb and dropped his heavy work bag onto my shoulders. It had two laptops in it by the way and was a messenger bag fitting a person who was almost six feet tall. Now imagine what that looked like on me, a barely five-feet tall gnome. As I staggered to regain my balance and walk in straight line with this long bag dangling near my ankles and weighing a ton, he casually placed one arm around my shoulder and leaned on me the way would on a pal who is your own size. There was no point trying to stand up straight by this point. Piggybacking him home was out of the question. So right then, it was Shane - 1, Ankita - 0.

As we were inching towards home, he'd slow down every now and then and ask me to walk slowly too. I kept asking him if he wanted to puke, failing to hide my excitement in the fact that it was finally happening. He'd look at me like a child who'd been asked to recite the periodic table every time I gently redirected him to the gutters on the side of the road to puke. After he'd stand there for a while confused as to what he was supposed to do next, I'd drag him along the path once again. By now, I knew that the puking would happen only once he'd been made to lie down on a horizontal surface.

While I was getting all this ready, he somehow managed to lock himself in our bathroom. I used a coin to open the door from outside the way he'd taught me to a while ago, lest one of us has a fall and can't open the door (Shane - 1, Ankita - 5). I found him just standing in there, looking around like he'd never seen our bathroom before.

The crucial point, however, was the bowl near the bed because I knew that a) he would find it hard to run to the toilet when he wanted to puke and b) the other alternative would be to puke on the floor. This is from experience, a specific experience I remember as clearly as if it happened just yesterday. We were having Christmas dinner at The Bromance's in 2015 and I'd had one too many glasses of white wine. The problem with fruity white wine is that you don't even notice that you're getting tipsy because of the sweet flavour. Anyway, I was in bed that night and almost asleep when I felt the sudden urge to puke. And before I could stop myself, puked on the bedroom floor. I know I already gave myself a point for the ingenious idea of placing a bowl near the bed for him, but in my heart, I know that I deserve another.

Once the puking started, I turned into a military nurse in a war-zone. The puke bowl was promptly emptied, rinsed and replaced with extra tissues a couple of times, he was made to drink water and I even tried to force some plain chips down his throat so that he wouldn't sleep on an empty stomach. But he kept repeating "LET ME PLEASE DON'T EAT ME" so I let that slide. I think for all that, I deserve at least two extra points so currently, were at Shane - 1, Ankita - 7.

Taking into consideration the number of times he's had to take care of me, I'd say we're at Shane - 6, Ankita - 7. I still win.