Before I forget, I should mention that the title inspiration is from Hotel Transylvania 2 which is an amazing movie that made me laugh till my tummy hurt, and that you should definitely watch it. Also, think of me and smile when Count Dracula says, "Yes, yes, with the phone and the buttons and the agony."

Coming back to the point of this rant, I just remembered (in the shower) how almost every other adult I knew back home, bombarded me with questions regarding my cooking skills the minute they found out that I was getting married. We announced our engagement around this time last year and my (in)capability to cook was the second most common topic of discussion almost everywhere I went. The funny thing is, nobody ever asked The Husband if he could cook as he too was going to start living with another person. And the best part was, the only people who never asked me if I could cook were my (then future) in-laws. In fact, they told me that since their son was a foodie, the one thing I would never have to worry about is good food. They promised that even if we didn't have a roof over our heads, The Husband would make sure that we still ate good food. They know their son well. I must give them that.

Tomorrow is going to mark our seventh monthversary since the wedding, and after a lot of successful (and some failed) experiments, I conclude that I'm only good at cooking for survival. If you want me to make you dinner, I promise that the food I cook will help you stay alive and will be tasty in a general sense, but not fantastic. It will be something that I whipped up in less than 30 minutes because my kitchen is tiny and I don't like spending more than 30 minutes at a time in there. But if you expect me to feed you something exotic, artistic and "amaziballs", I will order something from one of the best places in town, because trust me, The Husband and I know all the best places to eat in the city. I wasn't even trying to be modest when I said that.

So to all the annoying adults who pressured me to enter the kitchen back home and start cooking lessons with my parents because I was a woman and had to learn how to cook, I just want to say, "CALM YOUR TITS, YOU PLEBS!!" (or as The Husband often says to me, "Hakuna your Tatas, woman!"). Why don't you just shake 'em and dance with me instead:

Lessons Learned and Advice from the Heart:

No, seriously. Worrying about cooking in this day and age is like worrying about pregnancy while you're still a virgin. You just need to take the first step and see for yourself that it's no biggie. Everything begins to make sense eventually. That's why you have all those good people on YouTube and other places on the internet, giving you step by step instructions on how to go about feeding yourself and staying alive. Stop making a big deal out of something like cooking when you've actually endured "the pressures of high school". Even Punchy (my best friend who was born with that name, remember?), who didn't even know how to boil water (or did she?), started cooking for herself and SURVIVED when she moved away from home! If Punchy can do it, anyone can.

So as a final act of rebellion against the Cooking Nazis, here's a picture of The Husband deciding to have a packet of marshmallows for dinner: 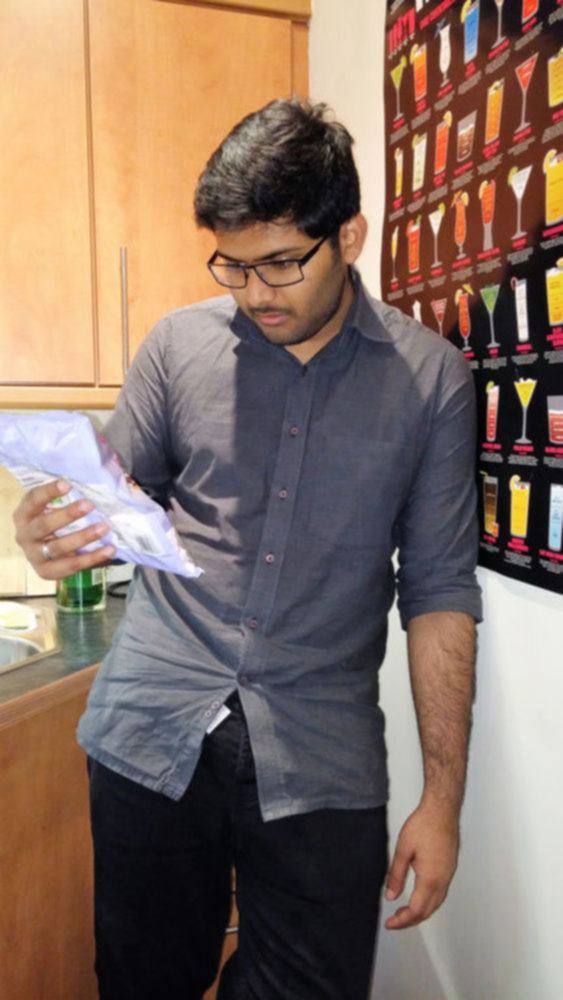 Just Kidding! This was one of those days when we had to play "rock, paper, scissors" to decide who would get the door when the food delivery arrived.

Also, I'm making lasagna for dinner tonight. No, seriously. Because that's how we roll in the Shankita household.

A big shout-out to my Dad who can replicate exotic food recipes by just tasting them once, my cousin Shilpa who's an artist and treats even her food as art and to my cousin Radha who can prepare a tasty meal for 20 people with the same ease with which I crack an egg open these days. I want to embarrass all three of them by treating them to a meal I prepare out of marshmallows and cheese. Some day.