I've been waiting to write this braindump, the first of 2018, for a while now. Mostly because it's been a good month, and I've been in a great mood most of the time, and I'm certain that that'll reflect in this post, but also because I've missed this. I've missed the freedom these braindumps award me.

It's not as if I've gone for entire months without writing one of these, in fact, I just missed last month's braindump. It was the first one I missed since I started this tradition back in May of 2016 and it gnaws at me that I missed the very last braindump of 2017. I've typed braindump so many times in the past few minutes that it's beginning to hurt my brain but moving on, I've decided not to be too hard on myself for missing it because you all know what December was like for me. So I'm simply going to do the next best thing which is place the entire blame for my omission on the savage way this Christmas holiday disrupted my family's notion of "normal"...Bah humbug!

My parents are getting ready for another one my dad's reviews at the hospital and so far, his reports look pretty good. He climbs down two flights of stairs every morning, walks in his garden, starts his car from time to time and two days ago, he even drove it to the front of the house. He's decided that nothing will disrupt his "normal" and would probably disapprove of my earlier imitation of Scrooge.

Speaking of (both my parents and Scrooge), I'm not sure if I ever mentioned here that two of our suitcases on our way back to Edinburgh were filled with snacks and food. Shane and I haven't had to cook even once since we got back as we've literally been heating up the food both sets of parents packed for us. Towards the end, we were beginning to slowly back away from what we sensed to be a kind of competition between my mum and mum-in-law while packing our bags. Though they never said these words, this is what we thought the environment in that room was like:

"You're packing beef curry? Then imma gonna pack some chicken for them."

"Oh, yeah? Well, then I'm gonna bring in some extra achappams because they went nuts for achappams this time."

"Oh, please! Have you even seen the stash of snacks I've already packed for them, including but not restricted to achappams?"

"Fine. But guess what? I'm going to take them to the airport tomorrow morning so I'm going to bring extra goodies that they can take along with their hand baggage."

Shane had to intervene when my mum-in-law (who could easily crush me with her thumb, by the way) opened my backpack at the airport and started stuffing it with snacks for the flight.

All the while, the only reasonable reaction was from Shane's brother who kept remarking that he'd be willing to finish some of the snacks for us right there unless we planned on opening a shop in the UK.

In case you're having a tough time picturing all of the snacks, let me tell you first and foremost that we don't have enough storage space for all that food in this tiny little flat of ours. So we had to resort to systematically stacking them on a spare dining chair, making sure everything was pressed against the dining table in such a way that the pressure was just right for the snacks to not crumble but also for the tower to not collapse onto the floor. I exercised the non-existant physicist side of my brain so much during the stacking that I wouldn't be too surprised if I died a virgin.

If you're still having a hard time picturing it, this is my view right now while writing this post: 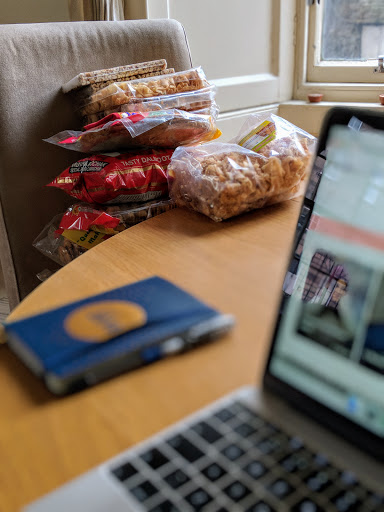 And that's after we've gone through multiple packets in the past two weeks, not to mention some that we gave away to our friends. In fact, it's only now that you can even see the top of that chair. 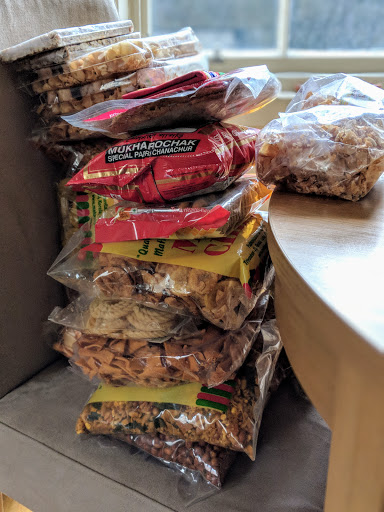 As for the game of Jenga that Shane and I have to play every time we feel like snacking, I'm gonna leave that wholly to your wild imaginations.

Sometimes, I get mad at my parents for putting me through this torture because GOD, the work! Do you have any idea how much work it’s going to be to consume it all? SO MUCH WORK. I don't know how they even sleep at night.

Except I do - with a big fat evil smile spread across their faces. Here's proof: 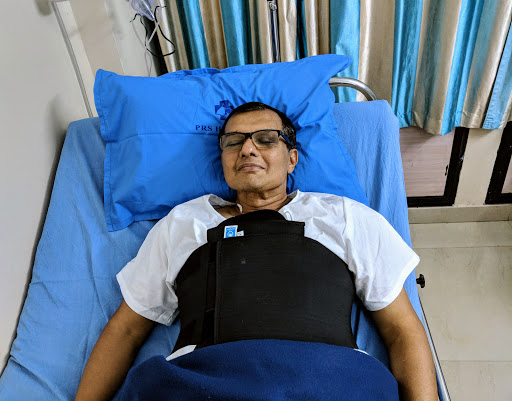 That's my dad on the day they brought him to the room from the ICU post surgery. He fell asleep while watching TV with his glasses still perched on his nose. And he was smiling the most contented smile I have ever seen.

I've seen this smile on his face a lot and I can't help but feel envious of the happiness and contentment he has during retirement. Not even a major surgery managed to take that away from him. I wish I have that when I'm his age. Not a worry in the world! Just pure peace of mind and happiness.

But how many of us really get to experience that in an entire lifetime? I hope my parents know how incredibly lucky they are to be this happy. And I also hope they know how happy I am for their happiness. It fills my life.

On that note, I shall end this Braindump. But I promise to be back with another one soon, a Bonus Braindump if you will, and in the next few hours perhaps, because I have so much more to say and I think I can allow it considering the one I missed last month.

So until then, tell me in the comments below about all the things that make you happy that maybe even help you sleep with a contented smile spread across your face every night ⬇️