Before I start, allow me to address this from the previous post I published:

On that note, I shall end this Braindump. But I promise to be back with another one soon, a Bonus Braindump if you will, and in the next few hours perhaps, because I have so much more to say and I think I can allow it considering the one I missed last month.

When I read that now, in my head I just go, "mimimimimi Ankita shut up". Because increasingly this year, I've been learning that I shouldn't make announcements of the kind on the internet (or in my personal life for that matter) as circumstances have proved that being the mere mortal that I am, I have very little control over a lot of things that keep me alive on this planet.

To cut to the chase, in "next few hours" after publishing that post, my keyboard got her period and decided to mess with me every time I tried to press the spacebar. And those of you who, like me, spend an inordinate amount of time typing things on your keyboard might be familiar with that occasional spell of time during writing when you forget to look at your screen and keep clicking away without a break because extra long sentences that drive you out of breath while reading them out loud are all the jazz right now. You might even feel a bit proud of yourself when you're typing away without a break or a mistake until you get to the end of that important train of thought. But that's until you realise that your mistake free string of words look like this on the screen:

What followed was the process of digging up my laptop's warranty card and whatnot, and hauling it all the way to the closest apple store. Except just before I was to step out of the house, the keyboard fixed itself and seemed perfectly fine. Then the following morning, it went back to beinglikethis but again fixed itself before I headed out, perfectly capitalizing on the fact that I'm a lazy piece of shit who hates even going to the doctor to save her life let alone to the apple store to save her laptop's life. The morning after that? If my laptop were a human and I her shampoo bottle, let me tell you that she took the "rinse and repeat" instruction very seriously.

Anyway, the update is that she seems to be doing just fine right now and maybe I could get to the end of this post without too many hiccups. So hello, internet. It's been four days since we last spoke and while this is not the longest I've disappeared without saying hello, it sure feels like a long time. I have missed the smell of your breath in the morning.

As you can imagine, an erratic keyboard came in the way of a lot of things I needed to accomplish in the past few days, some of which forced me to use our home PC which in turn, forced me to be on house arrest for this duration. I had decided a while ago that I would not force myself to write on that PC because we use our TV as the monitor and our coffee table as our desk with a wireless mouse and keyboard. Writing in that arrangement reminds me of quite an unpleasant time of my life when I, again, felt trapped instead of happy about letting my creative juices flow. I couldn't afford a laptop at the time since we were in debt and while that whole situation was a bit crappy, I'm just going to conclude this by making an umbrella statement along the lines of it being a learning experience. Remarking that we've come a long way from that time of our lives is also fitting in this narrative.

But coming to happier times and posts that were indeed written on my non-PMSing laptop, do you remember the January Favourites post I released last week? One of my favourites was the book Alias Grace by Margaret Atwood and do you know what happened when I shared that post on Twitter? 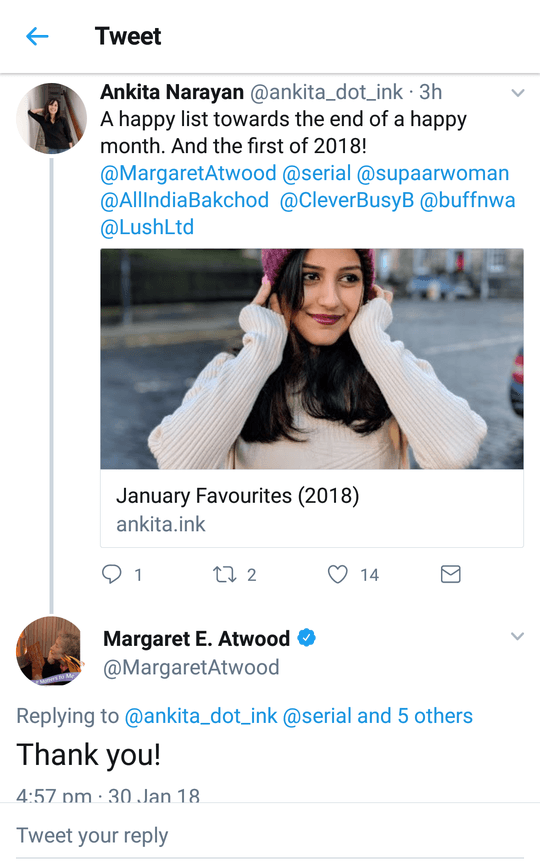 No big deal. Just one of my favourite writers acknowledging my existence on this planet. It's cool. No, you're crying!

I think we've already established on this blog that I'm a weirdo who takes screenshots of everything for "future reference" but before I took this particular screenshot, I went through a couple of phases of disbelief that even rendered my fingers numb and immovable.

One of my first reactions as a classic skeptic who's a bit fucked in the head after years of undoing the effects of systematic pseudo-religious infiltration since my childhood, was that this was a false alarm. That surely, the real Margaret Atwood didn't read my blog post. She probably didn't even lay her all-perceiving eyes on it. Sure, this profile is verified on Twitter and I've been following it for years because the rational part of my brain knows that she's the one tweeting from that account, but it still couldn't have been her who actually replied to my tweet.

I got over this disbelief and my very rational fear of being one of those people who get excited by replies from fake/fan accounts on social media by meticulously stalking her for some time. What followed after establishing that it was, in fact, the real Margaret Atwood who saw my name and perhaps even read my blog post was pure, unadulterated nerd-joy which culminated in over two hundred words of a blog post being dedicated to the subject. You must forgive me readers, but this was a huuuuuge deal to me.

I can see that once again, I have rambled on for close to 1000 words in a day and age when people complain about the fact that Twitter doubled its word limit. The effort it takes to read 280 characters of content is...you know what? I can't even.

That said, I myself was disappointed with the increased word limit and before you get your internet guns out to shoot "hypocrite" at me, let me make it clear that what I hate is not the fact that we have more words to read but that people like me are not exactly forced to be creative about making our thoughts succinct anymore. There's an art and beauty to expressing yourself eloquently in very few words, an art that I never mastered (and probably never will), that has been lost by allowing people to get wordy on a medium that forced one to think.

Never thought my last paragraph alone would add an extra hundred and fifty words to this already long post so I'm signing off for now. I'll see you soon but I won't promise when. For all you know, it will be sooner than you think :)