...After close to twenty days of hell.

But first things first. It's been a while since you last heard from me. I will explain why shortly but let's go back and revisit the last thing I shared on this blog on 7 December.

So despite my ambitions to be super-productive this month, I might just end up having a month-long holiday with little spurts of getting things done and it will only seem like a very long first of December in my head. As you can see, the case of the blithering basket-case is quite hopeless. But she couldn't be any happier right now.

And I truly was very happy up until that point. It's almost surreal when I look back on that day and realise that it was within minutes of publishing that post that I received a call from my very frantic mother, telling me that my father had suffered from heart palpitations just then. It was around 9 p.m in India and my parents were slowly getting ready for bed. She explained that he'd sat at the edge of his bed with his head bowed down while struggling to breathe for a few minutes. Following that, he even picked up the phone and spoke to me like nothing had happened, promising to go to the hospital first thing in the morning.

At 6 am on 8 December, my father drove himself to the hospital, climbed a couple of flights of stairs and got himself tested. An ECG followed by an angiogram revealed multiple blocks in his heart including a major one in his left coronary artery, leaving all the doctors baffled at how he'd not suffered from a major heart episode up until that point. They later revealed that it was quite possible he had indeed suffered from previous episodes, however being a diabetic patient, there was a good chance that he didn't even realise the pain when it happened. Apparently, that's very common among diabetic patients.

At the time, I thought that was the scariest thing I would hear. But this wasn't just one day of hell, was it? There was more to come.

He was immediately admitted to the ICU and preparations were being made to wheel him into an open heart surgery within the next two days. There was no time to waste. However, his pre-op evaluations revealed further complications that I won't go into here, owing to which he had to be monitored closely for ten days as they prepared his body and shockingly weak heart to withstand the brunt of the mammoth intrusion that is a bypass surgery.

I say this every day and I'll say it again - we're a very lucky family as we didn't have to bring him into the hospital in an emergency situation. None of this moderation or monitoring would have been possible under those circumstances and the risk would have been that much, much higher.

Shane and I arrived in India within 48 hours of learning about the surgery. My parents had seen us approaching the building from a distance and as soon as the lift opened up to their floor, relief flooded over me as I was greeted with the all too familiar smile belonging to my mother. A few steps further down the corridor revealed my dad, with his outstretched arms and dazzling smile which some of the nurses said I inherited from him. In the moment that I ran into those arms and buried my face into his chest, I forgot that the beating heart in there which was brimming with love for us was a little too weak for a sixty-year-old. Images from his sixtieth birthday which we celebrated less than two months ago came to mind as I fought back tears.

This photograph was taken that very day as I shamelessly climbed into his hospital bed after lunch and took a nice long nap with him: 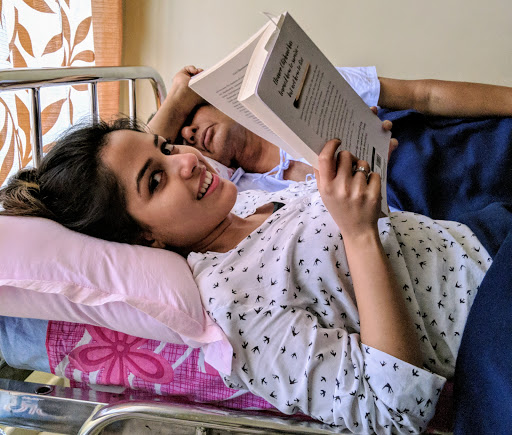 Had anyone told me on that day that exactly three years from then, I'd have to witness my dad being wheeled in for an open heart surgery, I would have broken down. Little would I have known that my father's assuring smile and confidence would be all I'd need to get through that day. He kept reiterating to us that he'd come out of this and he'd be just fine. He said he even felt just fine and couldn't wait for this "little technicality" to be over with so that he could go home to recuperate.

This is us just hours before he was wheeled in: 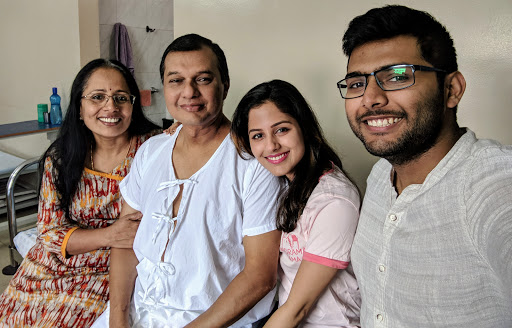 During the eight long hours of the surgery, we were advised to stay put in the room and wait for further instructions. One of the surgeons who'd come in to clear our doubts and explain the procedure to us told us that everything would be absolutely fine, however, if there were to be any issues, they'd call us to the operation theatre within the first two hours of the surgery. If no one called, that would mean that the everything was proceeding smoothly.

I would say that those eight hours spent in the room in anticipation of news were some of the worst in our lives but nothing compares to the first two hours. For some reason, on that day, a lot of nursing students were in the hospital and I believe there was some confusion in a venue provided to them because of which they kept coming to our room by mistake. So imagine our horror when, in the first two hours of the surgery, we were met with a regular stream of nursing students who we always assumed were coming to us bearing the worst news.

At the end of the eight hours, we received a call informing us that the surgery was over and we were to go down and meet the main surgeon. We sauntered in expecting to hear about the success of the surgery and advice on the further course of action. To say that the surgeon looked like he'd seen a ghost would be an understatement. Slowly, he explained how difficult the procedure had been owing to my dad's left coronary artery and many branches on the right being 100% blocked and so calcified that "it felt like a stick". He also explained that a couple of the grafting needles broke during the procedure because of the calcification in his arteries. Now, that is probably the worst thing a family member can hear following such a massive surgery. Relief came when he explained all that had been done to rectify the situation and all that could be done to avoid further problems. Both the surgeon and I initially discussed everything that could have caused this situation and the symptoms we may or may not have noticed in the past. It was so depressing that we both agreed there was no point dwelling in the past. The future was all that mattered.

If we'd known at that point that the future held a braveheart who was getting ready to blow everyone away with his will-power and pleasant demeanor, we would have probably rejoiced right then.

In the days that he spent in the ICU, I sent him messages detailing everything that was happening while he was in a semi-dazed state. I want to save them here because I'm sure these are small details that even we'd forget in the coming years. Please ignore the typos. 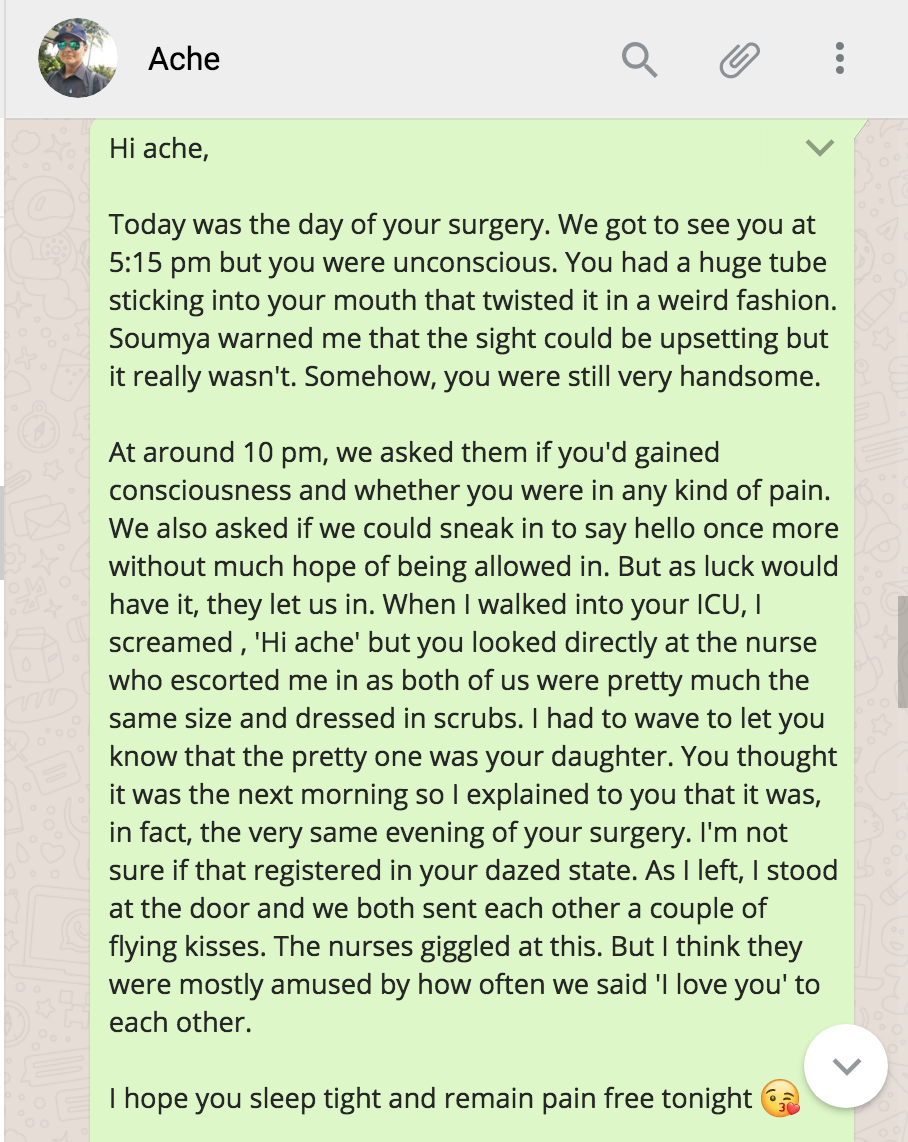 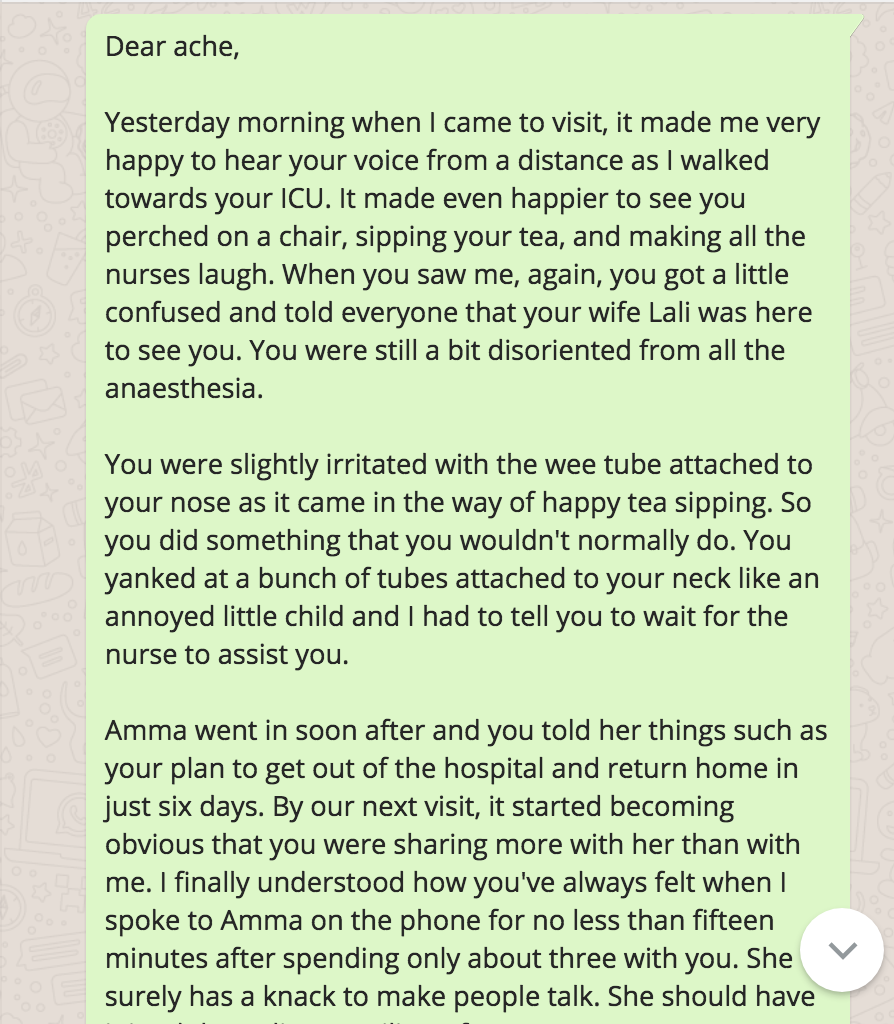 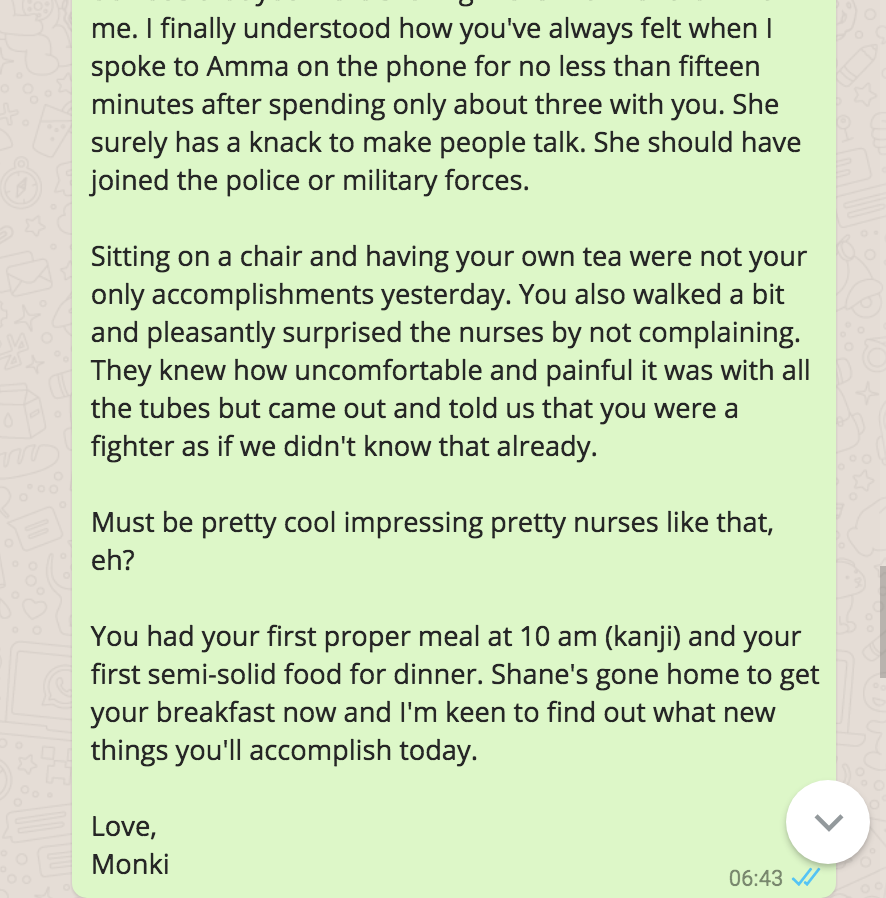 When my dazed father announced to everyone that he'd leave the hospital in just six days, we all laughed behind his back. But the progress he was making was simply exemplary. The doctors and nurses were a tad bit more impressed than the rest of us, as we'd seen his strength and will power even back when he battled cancer. And true to his predictions, he was discharged yesterday, on the sixth day after his surgery. Just in time to celebrate Christmas with the family in the comforts of his own home :) 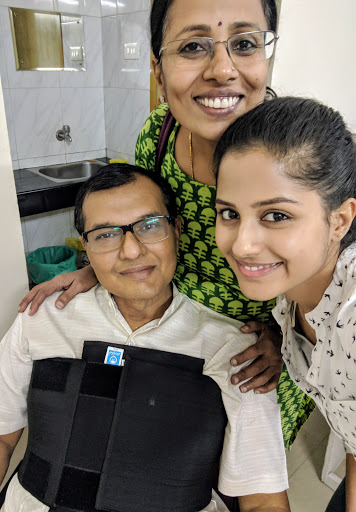 So, like I'd predicted in the first week of this month, I didn't end up doing any work in the days following that last blog post, albeit for completely different reasons. Also like I'd predicted (and contrary to all circumstancial suggestions in the past two weeks), it was going to be a very merry Christmas this year. A very merry Christmas indeed.