It's been so long since I did one of these and I feel that my braindumps sometimes keep me sane. Some people call it a rant, some refer to it as a stream of consciousness writing but to me, it's mostly just a braindump. Like the hand-written letters I used to write to The Husband before we got married. Like many of the posts you might have found on this website. The good news is, while my husband thinks that my braindumps are not good content for my blog because "I may like it but others are going to find it boring", I found out that most of you guys are as weird as I am. In fact, whenever I receive requests for "rants" I feel that I have found my kind of people on the internet. So this is as much for you as it is for me, my fellow weirdos. This is one of those posts which will start at one point and just go off at a tangent, or in twenty different directions. After reading this, if you ask yourself, "What did I just waste my time reading?", do let me know because that reaction would make me happy. Also, so much catching up to do ever since I fell sick and recovered two weeks later. Yeah, that was a nasty infection and both The Husband and I coughed up blood a few times (a fact that we hid from our parents because we didn't want them to get worried unnecessarily so Hiiiii Dad! Hi Mom!). But let's move past that bad phase and concentrate on the good. Which is the fact that we're both fully recovered now and even the nasty cough is almost gone. But GOD my house! Oh my God this house needs a blog of it's own where it can tell you all about us. We've been so careless with it and honestly, it's been more than two weeks since we properly used the living room simply because IT'S TOO MESSY. Let me just show you one segment of my living room that I turned into a makeshift hair-station a day before we left on our holiday. 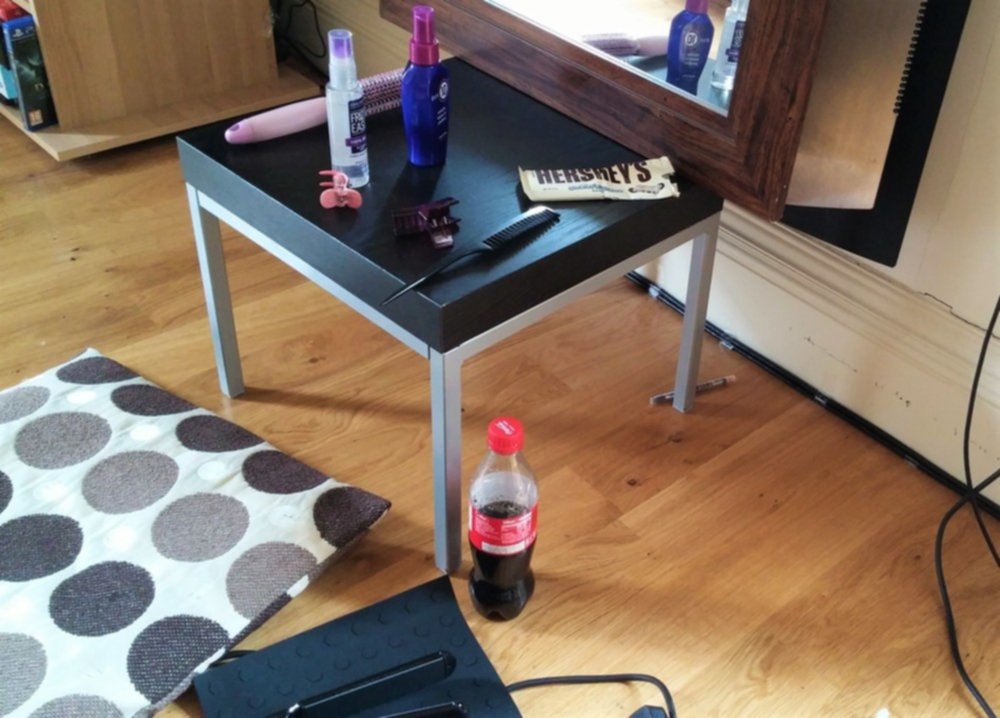 Yep, right there in the middle of my living room, next to the TV so that I can watch TV while doing my hair. This is what I see from where I'm seated right now and that picture was just taken on my phone. I'm sure you even noticed the eyebrow pencil under the stool that I've been too lazy to pick up. I've been meaning to carry everything back to the bedroom where I usually get ready but this system works so why change it? I guess it'll help if I try to publicly shame myself into doing what needs to be done while also making a public promise to the house that I will tend to it. So dear house, I will get to the business of cleaning you before Friday this week. I promise. If not, I will be forced to write another blog post about what a loser I am and that my friend, is not something I don't do anyway. I realise that this promise is starting to look weak so I'll stop now.

Speaking of losers and promises, The Husband and I promised The Bromance that we'd help him move to his new apartment. Neither of us could accompany him to the viewing of the flat so we were pretty excited with the pictures and everything we heard about the place. His moving date was Friday the 13th and we thought we'd all go there and check the place out. The boys had given me full freedom to boss them around and trust me, that's like Christmas in my little world. We got back from our holiday by midnight on the 10th and I was all prepped with my lists to go over to the new flat and boss them all around. So who wants to guess the date on which I fell sick? I couldn't be a part of the moving crew, I couldn't arrange a thing in that house, I didn't get to make my lists and worst of all, I bossed no one that weekend. In fact, my flu was the boss of me that weekend. It was a sad, sad time.

So The Husband got to do all of it. He arranged the living room in such a way that the person cooking in the kitchen can watch TV. That's what I would have done too but it bugged me that he thought of it anyway. He set up The Bromance's piano (oh yes he plays the piano and he's VERY good) in such a way that the people chilling on the couch can watch him play. But they were kind enough to leave some major decision making for later like, "Do we use the clean white furniture that came with the house or the manly steel and glass furniture that he already owned?" and "Where do we go to buy pots and pans and cutlery and crockery for the house?" and "What brand of toastie-maker should we invest in?". When I finally got my ass to the flat last Thursday, I decided that I wanted to somehow "eliminate" The Bromance and live in the flat myself. It was pretty amazing. So amazing, that you can see double rainbows from his fucking couch.

And we later found out that this happens a lot in the evenings because the Sun sets behind his flat and we live in Scotland where it rains on a whim while the Sun is shining or setting or exploding for all anyone cares. Because Scotland doesn't give a fuck.

I got to boss my boys around at the store where we bought pretty things for the flat. And when the final decisions were being made regarding the furniture, we decided to vote. And because I can control The Husband's vote by bribing him with ice-cream, the manly furniture had to be packed up and the clean white furniture got to stay. Speaking of ice-cream, remember this post where I complained about how we ordered Groceries online and I was feeling restless because I wanted to go out and get my stuff myself? Turns out, that it's so convenient to order your groceries online that it's the only way we shop nowadays. They bring it to your kitchen and unpack everything for you. Oh. My. God. The bad news is that we're spending a wee bit more than usual on groceries every week because we suck at adulting and the minute we see something shiny and fun, we decide that we HAVE to get it. You'd think that when you "cohabitate" with another human being you'd not make stupid decisions because there's two of you and one would stop the other from being stupid. Clearly, you haven't met Shankita. We're the dumbest people we know and we spend extra money on shiny things we might not need when we should be stopping each other from overspending. In fact, we suck so hard at this whole business of being adults that we manage to convince each other that it's important for us to get a 750 ml bottle of Fentiman's Rose Lemonade AND Curiosity Cola ALONG WITH a set of Bottlegreen drinks. But we don't like to dwell on the negatives. We like to share good news. And the good news is that now we've actually started planning out our meals in advance. And that's a huge step for Shankita because we're not only the dumbest but also the laziest people we know. This whole online grocery shopping thing is so convenient and easy that we plan out our meals in advance, get the recipes and ingredients together and order all the ingredients so that they get delivered fresh. It's been working out pretty well for two weeks now and cooking, I feel, isn't that bad at all. I would totally appreciate a bigger kitchen but this is not as horrible as I always pictured it to be. Look at us, one year older, wiser and "MATURER". Oh, who am I kidding? This is probably just a phase. But it's a good phase nevertheless. Moreover, the one part of the house that is almost perpetually clean is the kitchen because I inherited clean-freak-counter-licking qualities from my mother. So, spending time in the cleaner part of the house was actually fun. Also, since we're talking about food and groceries, my favourite new Mango juice is the Rubicon Mango. I would advice you to stay away from it because it's basically sugar solution with a little bit if mango in it. But mangoes in general remind me of home and this juice brought back a taste of home while I was indisposed. The Fentiman's Rose Lemonade however, is actually amazing and you should try it.

In other good news, I met my childhood best-friend Priyanka after almost 10 long years!

It's been 10+ years since I last saw this monkey, and it's still as easy as it was then to hang out with her. Love you loads @ankita.ink #edinburghlove

And if you've been with me for a while, you'll recall that story of how I got into Mozooka School of Witchcraft and Wizardry on my 11th birthday. I don't mind retelling it here but I feel that P needs a whole blog post dedicated to her. I'll tell you ALL the stories and you'll agree with what she told The Husband when they met: "Yeah, we were a little bit in love before you came along".

So here we are. You have finally reached the end of my braindump, the whole point of which was to dwell on a few changes that took place around the time when I fell miserably sick, coming to terms with those changes and feeling grateful for them, for understanding that health is the most important thing in our lives and that all the things you may possess are meaningless if you're not healthy enough to enjoy them. Also, to publicly tell myself that the house needs cleaning.

Have a nice day, my favourite people! I'm sending a lot of virtual bear hugs your way.