The school I went to had been an all boys institution for a very long time. I don't know exactly the year in which they started letting girls in but by the time I went there, it was a full-fledged co-ed institution with an approximate girl to boy ratio of 1:5. I'm not even kidding here. We had 8 girls in a class of 40 students #truestory

So here are a few things I should have said/done differently while I was in highschool:

So when people get super nostalgic about highschool, I just go like this: 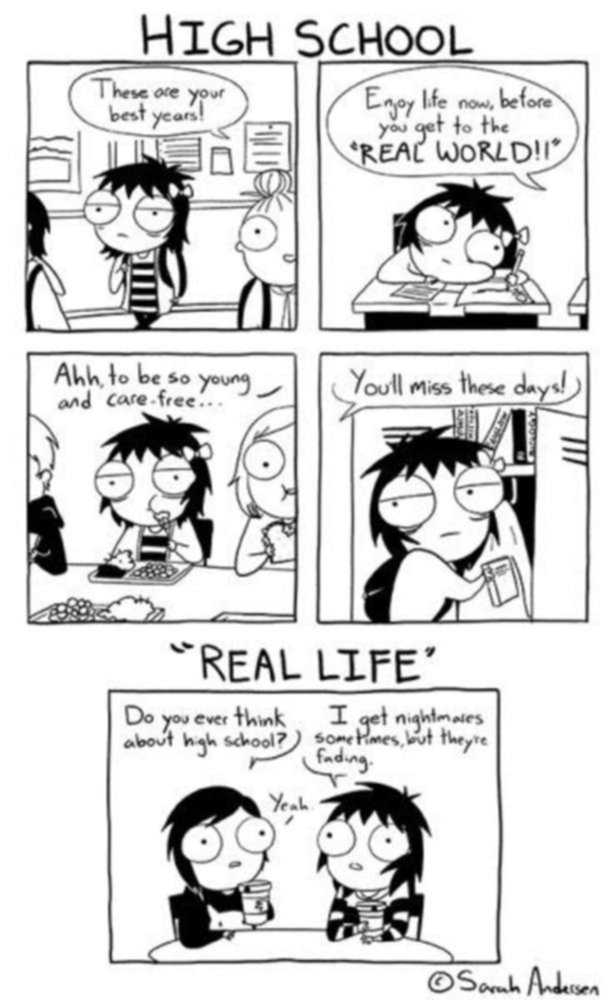 Because the worst thing of all was that I seemed to be the only person getting affected by all this. So affected that even 7 years after passing out from there, I'm still sitting here, writing about it. It's pathetic how I didn't react when I should have. I wonder what I was so afraid of. I wonder if anyone else felt the same way about these things and just kept quiet. God knows I didn't keep quiet in front of my peers. I used to complain about this all the time. But I was stupid for just complaining and not doing anything about it.

I wish I had realised what a vicious circle this was, with society contributing to the school and the school giving back to society. How so many factors have been ingraining gender disparity in the minds of the future generations. How gender roles permeated young minds unconsciously from a very tender age. I remember one teacher telling my mother that probably owing to the fact that I didn't have any siblings, I failed to see the difference between boys and girls. I wish everyone saw the innocence behind that behaviour and encouraged the same with all children. Because in essence, what is this difference that they wanted us to see? Why did they want us to be different. Imagine how well everyone would have gotten along, had it not been for the threats of being made to sit with the opposite sex or with people addressing an entire classroom of students as "boys". Even with the roll call system, the act of making the names of the girls appear after those of the boys although the girls were so few in number! What was the point behind all this? I can't answer that question. All I can do is feel foolish for repeating the same words that have been repeated by people all over the world for countless number of years, knowing fully well that nothing is bound to change any time soon. Those words are, "I can only hope for things to be different for at least the future generations.". How is it going to be different when there are teachers like these out there and parents who set different curfews for their sons and daughters? How is it going to be any different as long as parents worry that their sons will turn gay if they express a desire to play with dolls? Or when the same parents feel ashamed of their daughters who like to dress like men? It all started at a very tender age for these parents as well, yes I know, but what hope is there for the kids? It's a circle and there seems to be no end to this. It's a chain and there's no getting out. Because people are more or less blind to the understanding that gender, like religion, is a man made social construct. People should have the right to choose what they want and where they belong. Nothing can be assigned to anyone by virtue of birth. But unfortunately, people have been blinded by years and years of indoctrination. And I for one, cannot see how they are going to finally break free. Education is definitely the solution but WHO is educating you? WHAT are you reading? And WHAT lessons do you CHOOSE to take home from everything you have read?