Once again, please bear with me. I promise to get to the point at the end of a-1100-word rant.

I'm going to start off with some math here. Math, which is not one of my strong suits but let's hope that I manage to get some basic addition, multiplication, and division right this time.

We just released Episode 30 of our podcast, Desi Outsiders.

Including the pilot episode, we've released 31 episodes in the span of 34 weeks and 2 seasons.

Now, I went back and manually calculated the total number of minutes worth of audio we've produced in these 31 episodes. Turns out, that's a whopping 1084.88 minutes.

On average, it took Shane 8 minutes to edit 1 minute of audio. So the total time we spent editing all of that audio was around 8679.04 minutes.

Which means that in the past 6 months, Shane and I have spent at least an entire day without sleep, spread over roughly four days.

The tears streaming down my face that you can't see because this is a blog and not a vlog? Yeah, those are not because I'm sad or chopping onions. Those are just my eyes' way of protesting against the light they're being exposed to because I made the choice to get out of bed at a reasonable time this morning after releasing that episode just a few hours before I made that choice.

There's an unshakeable heaviness around my eyes that makes me look and feel like Droopy Dog. 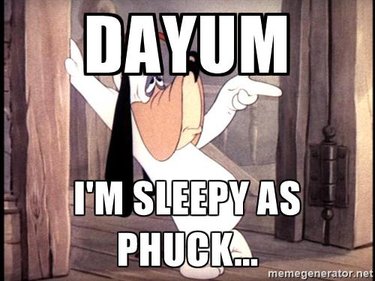 And I almost want to confess that parts of this post were typed out with my forehead, as I fell asleep in the process of telling this story with the aid of mathematics.

I'm coming to think that the name of this blog needs to change to 'A Whine-Fest on Sleep Deprivation' or something of the sort. I can't even think of a cool new name with half of my brain still asleep.

But that's not the point here. The point, my friends, is that while I clearly am not capable of coping with very little sleep from time to time, Shane does not even yawn during the day, let alone type code at work with his forehead. Oh, no.

In fact, last night, as I crawled into bed, clutching onto door frames and furniture with my hands to use the core strength I lack in order to drag my body across the floors like a human mop, Shane opened up a game and played well into the morning. I don't even know when he came to bed. I don't know if he slept at all.

And the day before yesterday, I know he came to bed at 4 a.m after shooting people on his screen.

And there's this other thing he does these days which makes me worry for any children we might have, lest they turn out to be as stubborn as their father. He decided about a month ago that he would control his diet. So he looks at the calories he consumes with every meal and there's no force in all the world that can convince him to consume even a single extra calorie than what he decided was just right for him.

This is a guy who can and will happily devour an entire animal farm on his own. But try waving some juicy rare steak in front of him on a day he's decided is a "strict diet day", and you'll see the smugness with which he'll reject the meat. He's had cheat days from time to time, days I can count on the palm of just one hand, and on these days he will eat an entire village. But on the following two to three days, he'll pretty much starve if he has to, and nothing can convince him to break his stubborn promise to himself.

I don't think I would have ever found the willpower to stick to something so rigourous, and to see myself lose 10 kilograms in one month. I couldn't have done it. Maybe raising this stubborn human was the hardest thing his parents had to do, but I hope they're somehow proud of his resolve. Dear parents-in-law, your child takes immense pleasure in starving himself from time to time but he makes sure he sees all the results he hopes for. That, right there, is your reward.

Also, because of his self-imposed rules, Shane doesn't snack anymore. So all the late nights helping me out with the podcast and the even later hours spent playing games are accomplished on very little food intake and I assume very little energy. I say "I assume" because I don't see it. The guy won't even yawn in front of me. I wish that was the case with the farts as well.

But coming back to the point, the new point which the old point was somehow leading to, we've found a solution to conserve his energy finally. I know it doesn't look like he needs it but I swear that the editing work that went into the podcast drained ten times the energy he spent on his video games while sacrificing sleep. He absolutely hated it. He loathes the time he has had to spend listening to my conversation with Meenal, removing all the unnecessary gasping, breathing, and choking on saliva. As an engineer, he loves to automate everything in his life. But alas, editing audio for a podcast is one of the many things that cannot be fully automated yet.

Finally, with Season 3, we have a new team member on board, someone we've hired to edit the podcasts from now on. You know what that means?

It means that the episode we released today, the one that

That episode is the last one edited by Shane.

Which means that he can be sleep deprived by just playing his video games from now on.

Which means that I can be like Meenal and direct my time and energy solely into preparing for and recording the episodes.

Which means that we'll sleep like normal human beings again. Although, normal in my case is 8-10 hours of sleep, and in Shane's case is superhuman stubbornness at not being tired after 8-10 hours of non-stop gaming.

I hope you will also join us in our ecstasy at the prospect of getting our lives back, by giving this final episode a listen:

Funnily enough, it was just with this final episode that we figured out the perfect formula for perfect audio on my side. I hope you enjoy it!

This QnA episode is very dear to my heart for many reasons, Meenal being called "the hotter one" NOT being one of them.

Speaking of QnA's, it's been a while since I did one here. So do send me any questions you have as I plan to answer them towards the end of this month.