After reading the last line of yesterday's post, The Husband said, "Not you. You're headed in a completely different direction. You're going to be the dog version of the cat lady. You'll walk down the road with your army of dogs. Obviously, they'll be walking you. And I'll be your side-kick who takes up the duty of feeding them.". That put a smile on my face. That's not a sad ending at all. Living with an army of dogs is the best thing ever!

Then he sent me this picture: 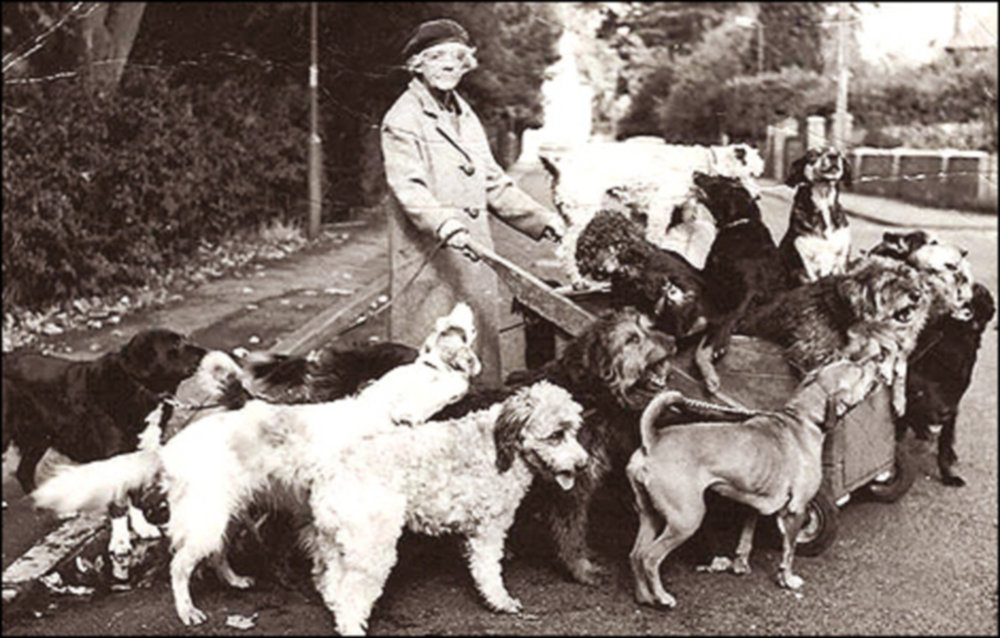 Which was also cute.

Then he proceeded to add the prefix "crazy" to dog lady. Suddenly I was being called the "crazy dog lady whose dogs walk her". That was Strike One.

Once he got home, he started playing this game with me, where he'd make a face every time I tried to talk to him. So no matter what it was that I was trying to say to him, he'd be making a creepy face to freak me out. At first it was a weird smile. When I asked him to stop smiling, he started covering his mouth while still smiling from behind it. When I asked him to stop that, he started winking. Except that The Husband can't wink. He thinks he's doing it right but he ends up shutting both his eyelids every time he "winks". So I just had a moron actively blinking at me while also trying to look cool. When I asked him to stop "winking", he brought his face close to mine and refused to move. I was expected to finish the conversation with his face right there in front of me. That could have been Strike Two but I decided to let that one go. He may be fucking annoying at times but this was okay.

By 11:30 p.m, I was asking him to set his laptop aside because I couldn't sleep. I had a massive headache and the light from his laptop was making it worse. He kept saying, "5 minutes" and that went on for a while. Finally I asked him why he had to code in the middle of the night. "Are you beginning to bring work home? That's so unfair." to which he said, "Oh this isn't work stuff. This is fun stuff."

"Fun stuff? You're coding. I may have a headache but I'm not blind."

THAT my friends was Strike Two. "Fun code" in the middle of the night while I was suffering from a splitting headache.

After he set his laptop aside, he started talking. Which is usually really sweet. It helps me fall asleep in a good mood. But yesterday, we were trying to arrive at a decision about what we wanted to do about dinner the next day. For most people, this is an easy task. Each person lists what he/she wants and you vote or weigh the pros against the cons. But in the Shankita household, I'm always made to choose. And that's perfectly fine on most days. I say what I want to do and we do just that. But GOD FORBID if I feel indecisive at any point, The Husband and I start playing that game that kids in kindergarten play with their friends. You go first. No you go first. No you. No YOU. Or like couples who just started dating. You hang up. No you hang up. Argh!

Every single time I ask him what he wants, he counter questions me. No matter how many times I try to tell him that I asked first so I should get a reply first, the stubborn pig still makes me go first. And finally his choice is adjusted based on what I said. So annoying!

And he did that last night. Right before bed. After he took ages to set that stupid laptop aside. While my head was exploding from within. Now that could have been Strike Three but I gave in and told him what I wanted so that we could get this over with and go to sleep. Except that things weren't going to be that easy. He refused to tell me his choice till I told him my choice "with love". "Say it with love", he said. How the fuck do you say anything with love when aliens are threatening to crawl out of your head and all you want to do is sleep?

I refused to "say it with love" and he refused to tell me his choice. THAT, my friends, was STRIKE FUCKING THREE. I caught hold of his arm and SUNK MY CLAWS INTO HIS FLESH LIKE A CAT THAT'S LOST IT'S SHIT. And what do you know? He moped about it like it was all my fault. I found out today that while I slept like baby after inflicting much deserved pain on the asshole I share my home with, the asshole stayed up till 2 a.m, standing over the kitchen sink and applying a makeshift icepack on his "torn" skin.

It was just a scratch. Get over it, Kylo Ren!

Although, I am the admin of the website and manage it for Ankita. I'm not going to tell you my side of the story but I'll tell you this. She called up her Mom the next day, to bitch about how I was being annoying and let's just say that her mother said something to the tune of "But, why didn't you say it with love?". Right back at you, sucker!