In my mother tongue, there's a common saying, ഉറങ്ങുമ്പോൾ പാവം (urangumbol paavam), which loosely translates to "(somebody) is nice when asleep". It often implies that the person in question is not a delight to be around while they're awake.

Over the past few days, however, both Shane and I have been realising that it might be just the opposite with me. I'm pretty nice to be around these days while I'm awake but the minute my head hits the pillow, I turn into a complete monster. I can't think why that is.

Over the past week, Shane has turned into an insomniac staring at a boring black screen on his laptop all night long, and surprisingly still managing to rise much earlier than myself. Because I tend to be a light sleeper who doesn't have much tolerance for sound, light or anything that could disturb my ideal sleeping environment, Shane usually stays back in the living room doing all the staring, sighing, and occasional typing while I retire to bed. There's a good chance that in a normal home, I wouldn't even notice when he came back to bed but in our stupid home, the door to the bedroom has one of these things on it: 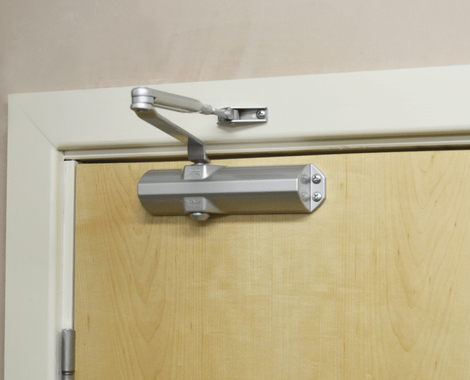 An automatic door closer thingy which is quite old, perhaps as old as the door itself, and they both creak every time someone so much as breathes in the direction of the room. The sound is pretty significant even when one tries to open the door slowly and carefully so you can imagine what it sounds like when an absent-minded Shane enters the room like this...

...and gets reminded of my existence in his life only much later when I turn into an unpleasant sleeping partner.

Every time in the past week when he's burst into our room like a diva being fashionably late and making an entrance, I think I have been subconsciously harboring a lot of anger and irritation which manifest themselves in sleep-time passive aggression. I think I must feel too tired and sleepy to open my eyes or say something so I just go ahead and become that person on Whatsapp who changes her profile picture and/or status to make a statement to someone in her contact list. Real smooth.

My techniques so far have included:

The funny thing is that I stop being a psychopath when I wake up, and more often than not, I wake up in a great mood. Whether the greatness of my mood is in any way correlated to the revenge I manage to exact in my sleep, we will never know.

However, when Shane recounts these details to me in the morning, I always confess to him that I remember doing all of those things. No passive aggression there, just the plain truth, face-to-face.

So, I guess I must have made a mental note to not be like that person on Whatsapp while I'm asleep because yesterday, on a fine Sunady morning, as I was happily sleeping-in, Shane decided to wake up early and stay in bed, staring at his phone instead of his laptop. Apparently, his phone was not on silent, and as he was replying to texts, it kept blowing up with notification sounds. But instead of "accidentally" kicking him off the bed this time around, he said that I made an abrupt, aggressive motion as I turned to face him, propping myself up on my elbow, and lifting my head to stare into his soul. He said that I fixed him with that nasty stare for a good few seconds before simply plopping on to the bed and going back to sleep.

When I heard this, I had no recollection of the event. None whatsoever. And I'm not sure if that's such a good thing.