Since my very first birthday in the UK back in 2015, my parents have made it a point to send us a big box of happiness filled with clothes and all kinds of food items that we don't get here. We call it our biannual goodie bag service and it's one of my favourite Narayan traditions. They send one box in October in time for my birthday and another one in February for Shane's.

Since it's his (and my mom's) birthday on Tuesday, Shane's goodie bag arrived the day before yesterday. But something was seriously wrong. First of all, it took close to 20 days for it to arrive and secondly, when it did finally get here, it looked like a rotting corpse. 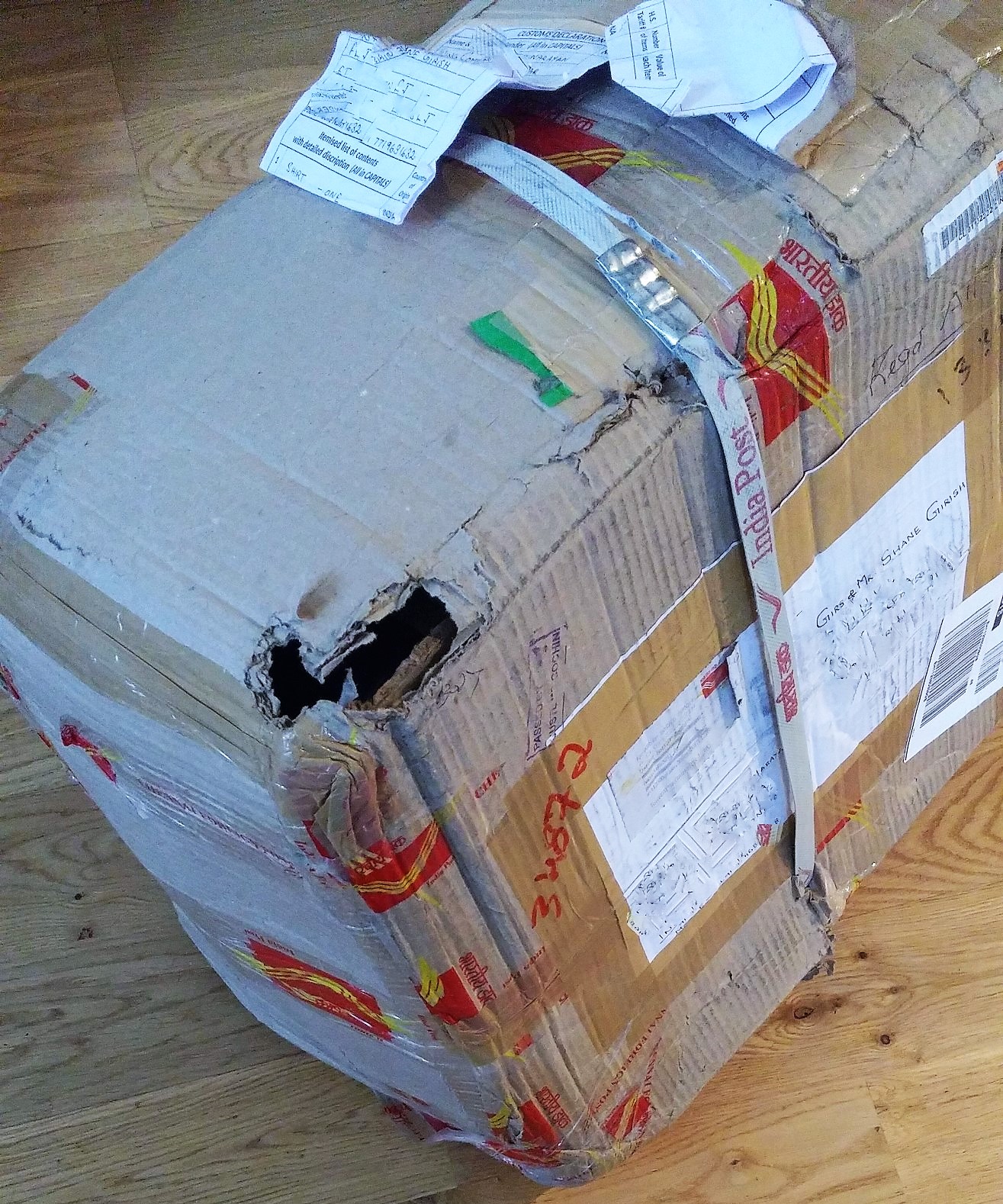 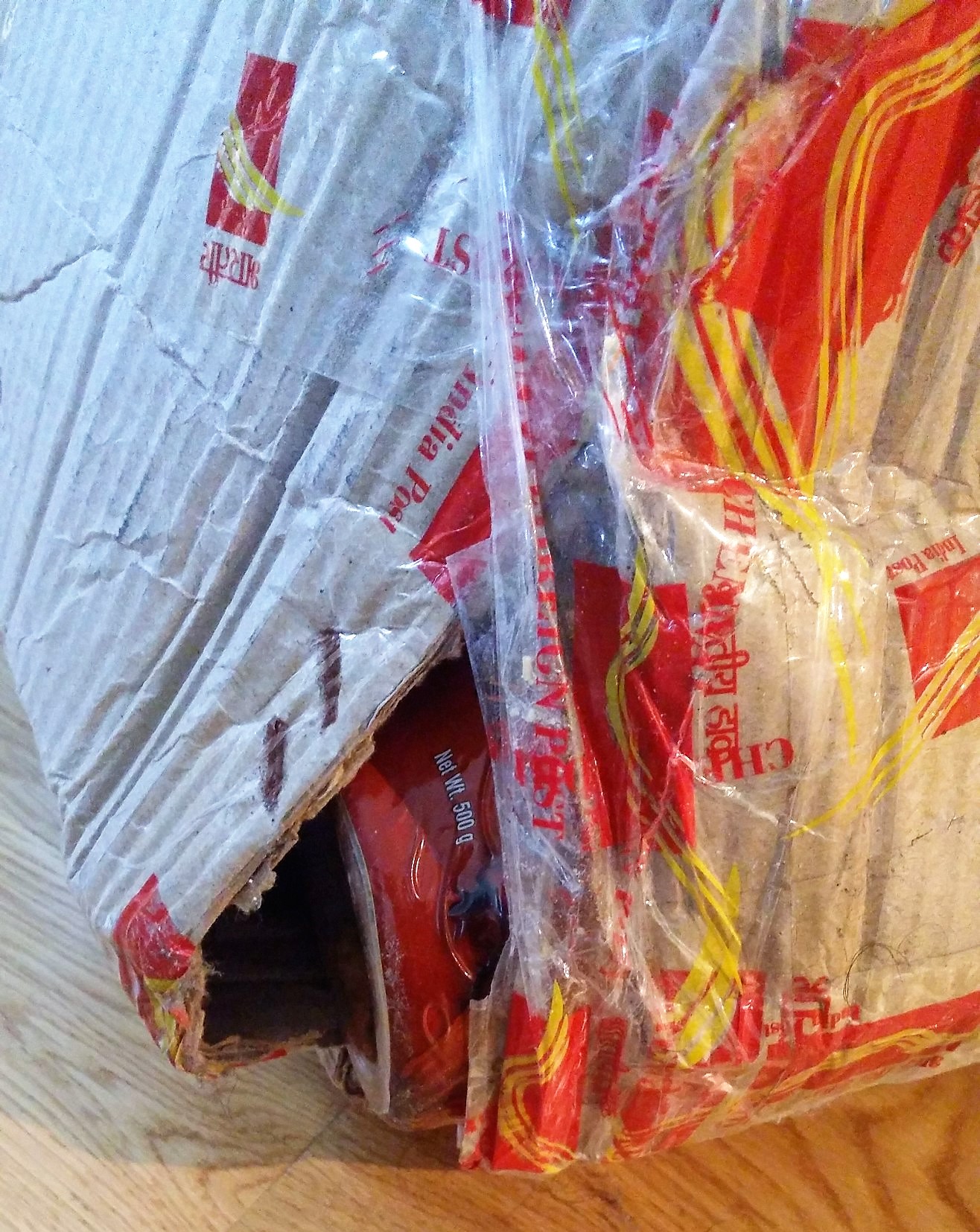 My parents usually send these boxes via the Indian post and up until last October, everything arrived safe and sound. And intact. And neat. And dry.

This time, however, alarm bells went off in their heads because it was taking too long to get here. Moreover, the official website of the Indian Post service seemed to be broken because there were no updates after the parcel had reached Madras. When my parents called them up, they said that the parcel was already in the UK and that they couldn't track it further.

Finally, on Wednesday, my dad called me up to say that the website had been fixed and that they updated the status of our parcel. Apparently, it had arrived in the UK at 6 a.m that morning, and within just a few hours, a nice delivery man handed over a rotting corpse to me. Turns out, that the website was not broken after all. What was broken was the Indian postal service. With all the Sasikala drama that's going on in Madras, they thought it'd be fun to leave all their parcels in a damp and dingy storage room somewhere for close to a week.

The "corpse" I received had holes in it as if a rat had tried to gnaw at it. It had also quite obviously been wet at some point because the cardboard was pretty much crumbling in my hands. In the previous post I wrote about our biannual goodie bag service, I mentioned,

Our house is filled with so many snacks that we don't have enough counter space or containers to store them in.

And because my parents are very meticulous and attentive readers of my blog, this time, they sent all the goodies packed in airtight containers, only one of which had a broken lid due to (I assume) the impact of being thrown into a storage room. And because of that, only one packet of mixture exploded inside the box and everything else was safe to consume. However, due to the broken lid, the mixture was everywhere and even covered my living room floor when I opened the crumbling cardboard box. 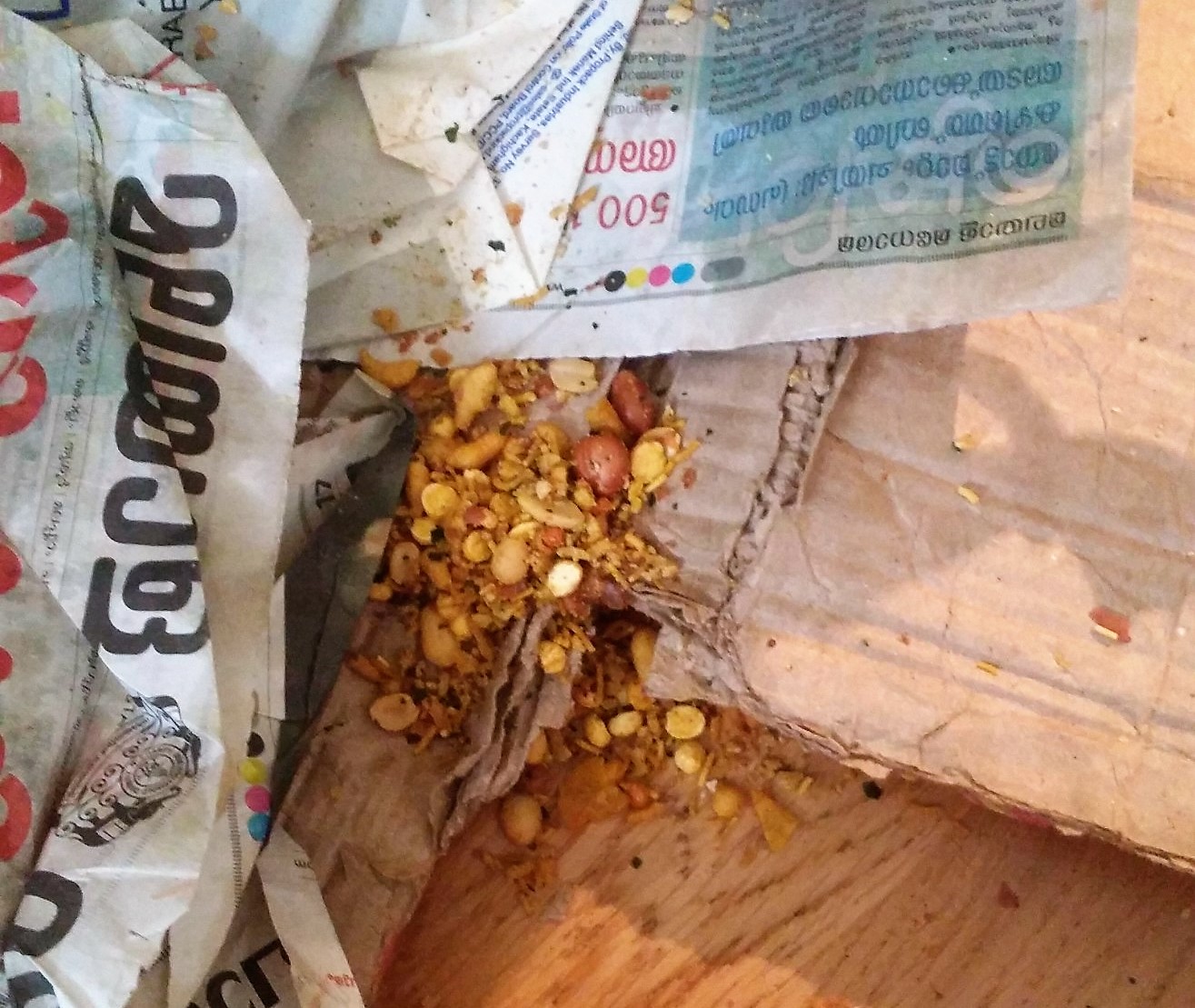 It was a scary sight because this time, my parents packed even bigger quantities of snacks for us since the last set lasted less than a week (not because there wasn't enough but because we're fatties and like to eat). This is just half of what arrived:

So imagine a 1 kg packet of mixture all over your living room floor. Thankfully, Meenal was still here so I made her clean it up. I thought she'd pick up the vacuum cleaner, but the fat kid in her went straight for it with her bare hands. And after she was done eating the bigger lumps, she lay down on the floor and licked it clean.

But the initial scare was that we wouldn't be able to consume anything. I was convinced that the crumbling cardboard and the holes on the sides meant that rodents had already got to our snacks. And I thought that the mixture explosion meant that every packet inside had been crushed. On Wednesday, I was already upset because Meenal was leaving the next morning. And on top of that, I thought that the loving gift my parents had put together by investing their time and money into it, by physically going to the best stores, by getting the snacks freshly made right before their eyes, and by packing and labeling each item, had all gone to waste. In a strange way, I felt guilty and for a few hours, I didn't even check the box to see what had actually happened.

It was only after I willed myself to get up and start cleaning that I realised that everything had been packed in air-tight containers and that only one item had been ruined. That's when my mom called to give both me and my dad some much-needed advice. In my home, I feel that my mom is the more level-headed family member. My dad gets easily upset if things don't go according to his plan and although I grew up understanding that what he exhibited was a bad quality, I turned out to be exactly like him. So when both my dad and I felt hopeless after what had happened to the goodie bag, this is what my mother had to say to us:

Only material things got ruined in this accident. Things that can easily be repurchased. Things that can be replaced. And thank God we're in a position of privilege to even do that if we wanted to. But what cannot be replaced are people and relationships. There are people in our own families and families of others who have lost someone precious. Someone they cannot possibly replace. So instead of being grumpy about the material things we lost, or things that didn't go according to plan, let's celebrate that we have each other and that we're capable of loving and caring for each other. We have a daughter and son-in-law that we can love and send gifts to and you have parents who love you.

Puts everything right back in perspective all the time, doesn't she?

And that's the note on which I want to end this week. Happy Friday, everyone! I hope you spend this weekend loving and feeling grateful for all the people who matter to you.

See you on Monday!