Allow me to start off by apologizing for being a bit MIA lately. EXCUSES AHOY:

When I was in the 6th or 7th grade, we were renting this old house which had a little plantation shutter on a small window overlooking the garage. One morning on a weekend when my parents were getting the garage painted, I happened to peep through the little shutter to see the painters sanding the ceiling. I then proceeded to my room to get on with my math homework. I remember to this day that I was doing algebra sums because something peculiar started happening to me. I was beginning to get a weird sensation in my right hand that was making it difficult for me to hold my pen. It was starting to make me irritated because I just wanted to finish my sums and get on with the rest of the day. But it's only when I finally dropped my pen in frustration that I noticed the difference between my right and left hands. My right hand had pretty much swollen to twice its original size.

I immediately got up to show this strange phenomenon to my parents. That's when I noticed my appearance in the mirror. The entire right side of my face was distinctly more swollen than the left, especially my lips and the area surrounding my right eye.

I don't really remember much of what happened after that. I probably blocked out the memory of being convinced that I was going to look like that for the rest of my life.

What I do remember though, is a blood test at one point that showed that I was allergic to dust and dust mites. There had been instances when I'd start sneezing on trains, inside libraries, and in rooms that had been locked up for a while. I'd sometimes get the same swelling on one side of my body along with the sneezing, and on some rare occasions, my entire body, especially my head, face, arms, and thighs would start itching, leaving me with a pathetic rash at the end of the day. I think I was just prescribed some antihistamines at the time which, if I remember correctly, I consumed on an almost daily basis for some time.

Then, I went on to college and all was well for a while. Until I moved into a hostel room that was infested with cockroaches. It was never uncommon for me to find cockroaches even inside my cupboard despite all the measures taken to get rid of them. It got to a point where I could walk into a room and smell the cockroaches. That was weird because no one else could smell them. On more than one occasion, I'd sit up straight in my bed and tell my roommate that there's a cockroach somewhere around us because I could smell it and surely enough, we'd spot one immediately. One day, we'd both had had enough so we sprayed the entire room with cockroach repellent and waited outside to see what would happen. No less than thirteen of those bastards crawled their way out of our room to fall dead on their backs. It was bad.

It was around that time that my allergies were getting progressively worse. My nose was constantly itching, my eyes always red and my fits of sneezing never went away. There was only so much my trusted antihistamines could do. Finally, on a particularly bad day, I woke up in the middle of the night finding myself unable to breathe through my nose. As far as I could tell, I didn't have a blocked nose but something was wrong with the insides of my nasal cavities. It was like they'd shrunk or gotten inflamed or something. Things got a lot better once I stepped out of my room.

So that morning, I went to the hospital to find out what was wrong with me. The doctor did a basic checkup and said that my nose was, in fact, inflamed and that he could prescribe more antihistamines and a special nasal spray for the time being although, the best course of action would be to get a proper allergy test done. The test alone would cost Rs 1500 and the further treatment would be more than Rs 3000 every few months if I remember correctly. As a student, I thought that was an insane amount of money so I returned with the medicines and the nasal spray. And they worked splendidly...for about a month. After which, I was back at the hospital to get the damn test done. I thought it was a waste of money because I knew what the test results would say. I was allergic to dust and dust mites. Period.

So imagine my shock when we found out that I was allergic to no less than twelve items on that list. The doctor then looked at me like, what are you? And I just shrugged my shoulders indicating that he'd better start his treatment soon. The main things I was allergic to were dust, dust mites, female cockroaches and female mosquitoes. There were some other interesting ones like milk, wheat, and dog dander but those were too mild to be taken seriously. I remember being relieved to find that dog dander was not an immediate threat.

The next course of action was to start my Immunotherapy treatment which was going to be an injection every couple of weeks to boost up my immunity against the allergens. Oh, and by the way, I took my test results to my hostel warden and casually told her that she was killing me. The cockroach problem disappeared within days after that because she got people to completely repair and seal the cupboard in my room which, as it turns out, is where all the cockroaches were coming from in the first place. I must have really freaked her out.

Moving on, the hospital prescribed the medication that I was supposed to order myself and get delivered to the hospital where I was to show up every now and then to get holes punched into my arm. I was so not looking forward to the needles. And as it turns out, the Gods were on my side.

The day on which I was to get my first shot, I turned up at the hospital and both the doctor and the nurse looked confused. And as you might already know, it's never a good sign when that happens. They then explained to me that the place that had sent in my medication had, in fact, sent a different kind of medication - one that was usually prescribed to kids. So instead of the shots, I was going to be placing a sugar cube dipped in the medicine under my tongue. This was to be consumed twice a week and they would gradually increase my dosage with every passing week till we moved on to the next vial. So someone, to this day I don't know who that is, kind of fucked up my medication and I wasn't sure if I should be happy or sad about this change of plans.

The nurse even remarked to me, "You know, it's probably because they confused you for a child. I mean, you do look like one".

But when I asked her, "You mean to say the mistake was made on the hospital's end while ordering the medicines?", she didn't want to continue talking to me.

Anyway, I underwent this Immunotherapy for over eighteen months, up until a month before I left for the UK. For the first time in forever, I was finally okay. I didn't have any more irritation in my nose, no more fits of sneezing and the swelling and rashes were all but history. The doctor even assessed me on my final visit and declared that I should be good to go. There are lesser triggers in colder countries, he said, so I should be just fine.

And just fine I was for two and a half years following my treatment. But it was when I returned to India two months ago that things went wrong again. I was fine for the first two weeks there but on my third week, as I casually walked up to the guest bedroom in my house, my nose started itching. It was a familiar itch coupled with watering eyes, followed by incessant sneezing. My parents began to freak out when it happened and my dad left for the medical store immediately to get me more antihistamines. I also got the very same nasal spray that was first prescribed to me in the hopes that it would work, should I be prey to another attack.

The medicine my dad brought gave me immediate relief and I left the country a few days later. But upon returning to Edinburgh, for the first time ever, I've been getting these allergy attacks more frequently. It looks like the effects of my treatment may have worn off or maybe I'm being exposed to a different kind of allergen here. The nasal spray doesn't help at all but the tablets do for the time being. Anyway, the spell's been broken and I will need to get my ass to my GP soon to discuss the next course of action.

So since October, every time I've gone missing from this blog for a considerable period of time, know that I've spent an entire day sneezing, rubbing my eyes, stripping the beds of my sheets, running the laundry, and vacuuming around the house.

To make matters a little more convenient for us, Shane and I recently invested in a Dyson V8 Absolute Pro cordless vacuum cleaner.

This has so far made it easy for us to immediately get to problem areas around the house if I sense something coming.

I love it so much that I didn't feel even a smidge of embarrassment when Shane discovered my selfie with it the other day. For all he knows, this vacuum cleaner may have replaced him in my life. 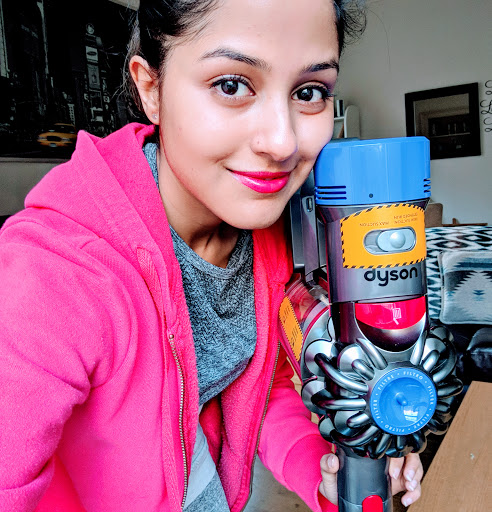 As for the rest of it, I'm sure we'll get to the bottom of it soon. And starting in December, you'll be hopefully seeing a lot more of me too :)