You know when you make a silly mistake and you just cannot believe that you were stupid enough to let it happen? It's not a feeling of anger of self-loathing. It's more of an 'OH, C'MON!' or a 'HOW COULD YOU?'

That's how I felt for the 38 hours following the interview Meenal and I conducted with Amandeep Singh of Inkquisitve Illustraions on Tuesday.

The interview went splendidly but it was only at the very end that I remembered to ask Amandeep if he'd been wearing his headphones all along. Turns out that he wasn't and that was totally my fault. I was the one guiding him through the setting up process and I even got his manager to arrange for a mic. A friggin' mic! And all I had to do in the end was ensure that he was wearing headphones so that the audio from our side wouldn't get picked up by his mic.

This has happened once before so I knew that we could fix it for the most part. But the editing? Oh, was that going to be a fun ride!

Shane and I were up till 5 am on the day of the release, editing six audio tracks instead of the usual three. 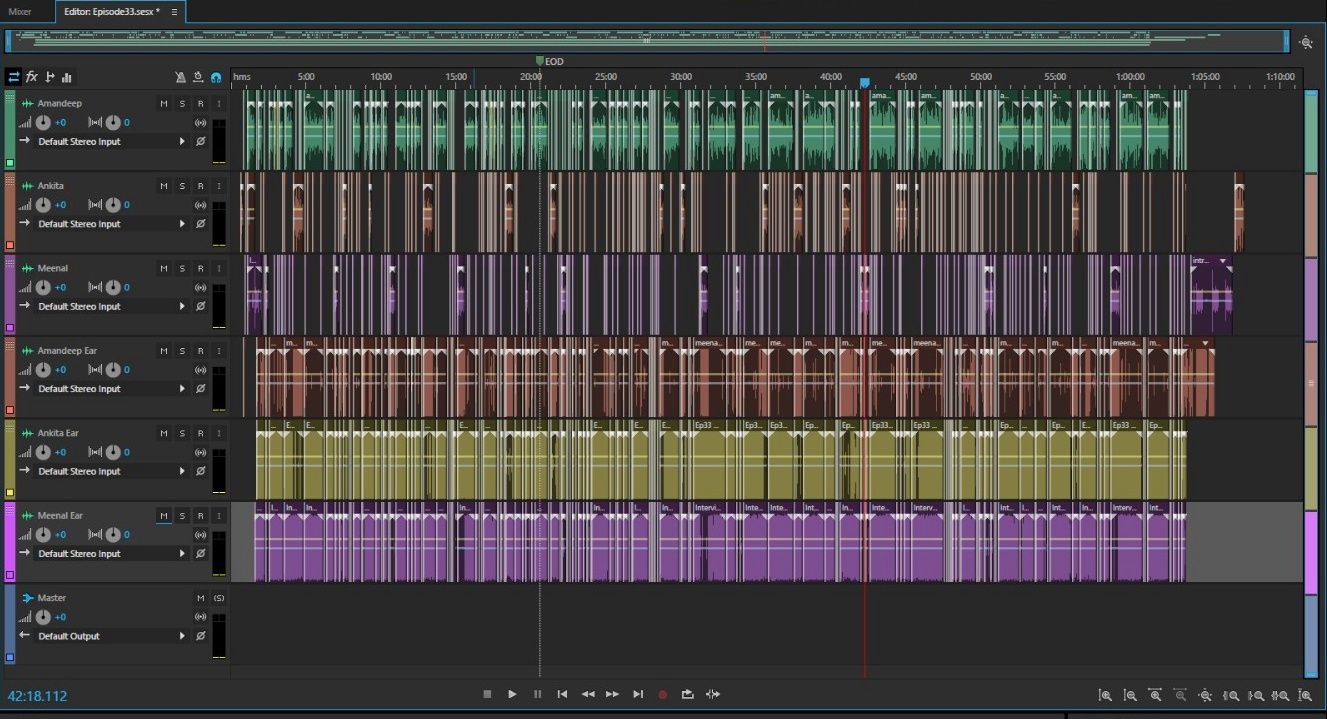 As you can see, Shane really had to get in there and chop-chop-chop his way through the 66-minute long conversation. But boy was it worth it.

Neither of us bitched or whined throughout the process because although I'd been a part of the conversation, it still felt so new, fun and inspiring. We were listening on the go and stopping at places to look up some of the paintings Amandeep had referenced during the interview. Shane hadn't seen images of the whole wall Amandeep had turned into a work of art in Oslo not long ago.

Can you see me standing? Another close up of the biggest Inkquisitive illustration which was painted in Oslo for #TurbanDagen in April (swipe left). If you happen to visit the mural please do tag me in, I'll be sharing all the pictures I have been receiving and would like to say thanks for all the love towards it! All ready for my next mural, where will it be?

But he sure was very familiar with the Donald Trump illustration.

What a time to be in America...

At certain points, we even discussed where we'd put up some of his works when we purchased them.

Those Who Follow The Crowd Usually Get Lost In It (2017)

Amandeep shared for the first time ever that he passed out of college with a first class distinction in Art and that his grades made him feel a tad bit egoistic about his career opportunities. And yet, he remained jobless for months. Even after he started gaining popularity for his own illustrations, it took him five long years to get to where he is today.

Add to a regular person's journey the emotional strain of being from a Desi community that likes to glorify only children who grow up to become engineers and doctors. He shared how people with sons who went on to become lawyers and what not, often asked him how his "doodling" was coming along. He shares how being bullied by his own art teacher in school later made him both confident and vulnerable at the same. He shares how his religion and Sikh upbringing has had a major influence on his art.

But the biggest takeaway for us was that Amandeep really was a gem of a person. My mother called to say that she felt like she was surrounded by positivity when she listened to him talk. The fact that his soul is as colourful as his art did not escape any of us.

We've all seen our share of successful people in our lifetime, so it was refreshing to come across someone who stood out for his humility and kindness. During the interview, we noticed how Amandeep listened very carefully to each of our questions because he'd go back and reference a point we'd made earlier from time to time. He always went back to a compliment we gave him before getting to a question, and thank us for it before answering. And in the end, when he revealed that he'd watched a couple of our videos and listened to some of our podcast episodes before coming on our show, Meenal and I struggled for words to show him our appreciation.

This interview, to us, was all about Amandeep. But somehow, he ended up making us feel very special in the end.