Last evening as Shane and I were carelessly scrolling through my Facebook, we stumbled upon this: 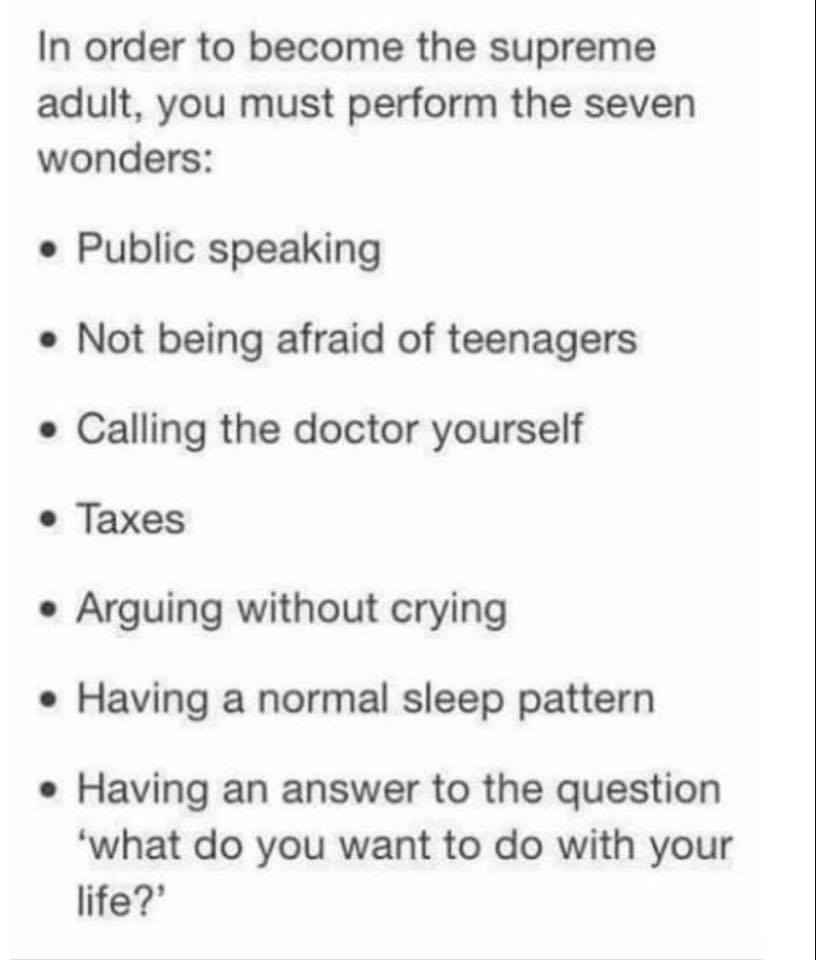 It goes without saying that we immediately jumped on this chance to prove to each other how the other was not 'the supreme adult' in our relationship. Or in any sense for that matter.

For example, when he said, "I'm not scared of teenagers", I was all, "Yeah right, when you're armed with your beard, hooded sweats and pepper spray, you're not".

So as it turns out, the screams are back.

He told me that in the past week, I have been sitting up and screaming every once in a while but if he stayed very still while it happened, so still that it would appear as if he wasn't even breathing, I'd just fall back asleep and have zero recollection of it in the morning. I'm very thoughtful like that, you see. So raise your hand if you feel envious of Shane for getting to sleep right next to me!

Going by his account, I don't remember most of the times when I've screamed in the past week. In fact, I only remember one of the instances which happened while he wasn't even in bed.

It was on Wednesday the 14th of March. I was halfway through the week and so tired that I was struggling to keep my eyes open by 8:30 pm. Soon, my eyes were watering and I told Shane that I was headed to bed. I don't usually fall asleep very easily so I went into the bedroom armed with my sleep-time podcasts and books to fall back on if I ended up being wide awake the minute my head hit the pillow. But this turned out to be one of those rare occasions when I needed none of that. My body had pretty much had it by 9 pm that night and I dozed off within seconds. And it seemed like just seconds later when I opened my eyes and saw a figure walking from the edge of my bed to the wall our bedroom shared with the living room. I saw it disappear into the wall with its 'head' facing towards me like it was saying, "See ya! Going to get your husband now".

In my head, I knew exactly what was going on. So I told my brain that listen, you got this. You're clearly imagining this and you can make it go away. But if only my brain would stop freaking the fuck out.

The screams that soon followed were horrible to my ears and the sane part of my brain rolled its eyes so hard it caused a similar physical reaction in me. Before I knew it, I was rolling my eyes myself and that seemed to snap me out of it completely. Meanwhile, Shane muted the television in the living room and sat very still on the couch because...PTSD, I guess. (Sometimes, I feel sorry for him but then I realize it serves him right for not learning how to load the dishwasher the right way in all these years.)

Anyway, when I checked the time, it was close to 9:30 pm and I'm certain I immediately fell asleep after that. I'm certain that I fell asleep before 10 pm in any case and you know why that is? Because my phone goes into its night mode at 10 p.m every night after which, it dims the screen and doesn't give me any notifications till 7 a.m the following morning.

So, again, how do I know that I must have fallen back asleep before 10 pm that night after I had the screaming fit? Because at some point, my phone started going out with message notifications one after the other, each one of them startling me awake only to have me realize that I didn't have the physical strength to reach for my phone and mute it. I actually found myself paralyzed, incapable of moving even a single muscle, but with whatever mental faculties I had working for me, I swore to myself that the minute I woke up, I'd hunt down the person who'd sent me all those messages and kill him/her.

Because you just know in these situations, don't you? You know that the culprit is a single individual who, instead of typing one long well-thought out message, sends you a hundred little separate ones in the form of individual words, phrases, and punctuation marks. Like:

I just realised I can't now

How does tomorrow sound

8 messages instead of one that says, "Hi, can we talk tomorrow?"

But before I lead you on to believe that that's what my message inbox looked like in the morning, I should tell you that it was way worse.

The messages were all from a certain Meenal Viz - you might have heard of her - and they were all pretty much concerning just two things: brown guys who cook and samosas.

There were six messages on WhatsApp and four on Facebook, and clearly, they couldn't wait.

I don't know if or when the screaming will stop, but usually, soon after I write about them, they disappear for a while. What I do know is that I'm going to put Meenal and her samosas on mute for some time because no one needs friends who wake you up in the middle of the night to talk about food. Thanks, but no thanks.

On that note, I hope you're having a wonderful weekend wherever you are, and that you're getting more quality sleep than I am. Later!