Today is the day I unlock a new milestone in my life. But before I get into that, let me take you back to a Tuesday three weeks ago when I woke up with tears streaming down my face.

I should mention though, that for an easily excitable person, I'm not usually a big crier. Whenever I experience uncomfortable emotions, I allow a couple of tears and maybe even spend more time than necessary dwelling on the problem but then, I simply get on with it. In fact, there might have been just about two or three instances in my whole life when I've broken down and cried uncontrollably.

And this was one of them.

I woke up with this inexplicable feeling that I was wasting my entire life, and it washed over me as gently as a truckload of bricks released over my head.

Within minutes, Shane was forcefully snapped out of his deep slumber by this dead sounding EHHHHHHHHH, like a sick cow had fallen over in the mud.

He asked me what the problem was, what he could do to help me, and whether he had unknowingly done something to upset me. My response to each of his questions was the same: EHHHHHHHHH.

I cried my way out of bed, cried the entire time I brushed my teeth, cried while making my first cup of coffee, and soon even established a delicate balance between crying and drinking that coffee at the same time. There was nothing anyone could do or say to stop the tears from pouring out of my eyes. And I guess that's what happens when you repeatedly try but fail to ignore that evil voice at the back of your head telling you that you're worthless. That you don't deserve the happiness you experience in your life on a daily basis. That you took all the opportunities life had presented to you, rolled them up into a tight little ball, and flushed them down the toilet.

I know now exactly what had triggered this meltdown but I won't even mention it here because it doesn't matter. What is worth mentioning though is the 'script' that was running in my brain while I was going through it:

And it was on repeat for hours.

Because the fact of the matter is, I left my job and prospects in a comfortable environment to follow the love of my life as he chased his dreams. Not because I forced to do so, but because I chose to. I was the one who made that decision and as much as I'd love it, there isn't a single individual I can shift that blame on to. But once I got here, the responsibility to make something out of my life and to give it meaning fell squarely on my two narrow shoulders.

The weight of this responsibility soon made me realize that I had studied English Literature in a third world country, and then moved to England of all places (ffs!) with a degree certificate that couldn't even get my foot in the door to a sensible interview.

I had to start over. From scratch. From square one.

While I was studying English in a country where most people (or at least most people I knew) didn't value anything that didn't have something to do with science, I was told time and again, to my face, that I was wasting my time and that I would never get anywhere in life. People, unfortunately, don't always use their voices for good and I, regrettably, allowed these voices to occupy quite a spacious corner of my brain from where they were free to resurface every once in a while to whisper sweet nothings into my ears.

Like they did on that Tuesday morning three weeks ago.

But not everything about that fateful Tuesday was bad. I still get goosebumps when I tell this part of the story to my close friends but it was mere hours after the never-ending water-works that I received a call which turned out to be a telephone interview for a position I didn't even remember applying to. The position and the interview revolved around specifically the skills I had garnered over the past two years, running this website and my podcast, while also tying together the experience I gained as a trainer at my previous job, and that as someone who has actively worked with multiple non-profits in the past. Basically, every single breath I took until then, every seemingly insignificant thought I put into something I'd been working on, every minute thing I'd done in my life, had led up to that phone interview which I hadn't even prepared for.

The very next morning, I got asked to attend a face-to-face interview scheduled for the following Monday and on that Monday evening after the interview, as I was walking back home with Shane, I got the call offering me my dream job. It hadn't been even a week after the meltdown by that point.

Today is officially my first day at this position. It is the first day of my new life.

I now work at a company that offers training and evaluation services to non-profits and advocacy groups across the globe, helping them accurately measure the impact they have on the world. Whenever I worked with a non-profit or even interviewed someone who did charitable work, I always wondered to myself if there was a way to find out if they were actually making a difference. For instance, sure, you go to slums and teach the women there how to read. But how do you measure the effects of your actions? How many of those women really benefit from learning to read? How many of them stop halfway through the course because of familial obligations? In fact, how many of them have been adversely affected by your project because their husbands beat them up for appearing too ambitious?

How do you measure these things?

I won't tell you exactly how but suffice it to say that now, I know.

I'm immensely honoured to say that I work with the only man in the world today who champions Contribution Tracing which is a thorough methodology to both measure change as well as provide assistance to non-profits to maximize their potential. He's one of the smartest, most creative people I've had the pleasure of meeting and through my position, I will be attempting to get his knowledge out there to as many people as possible. It doesn't get more exciting than that.

As you're reading this, I'm already half-way through my first official day at this new job after having traveled down to Helensburgh at the west end of Scotland for a two-day training programme last weekend.

This was the view from my workspace during the weekend: And this was my favourite work companion there: 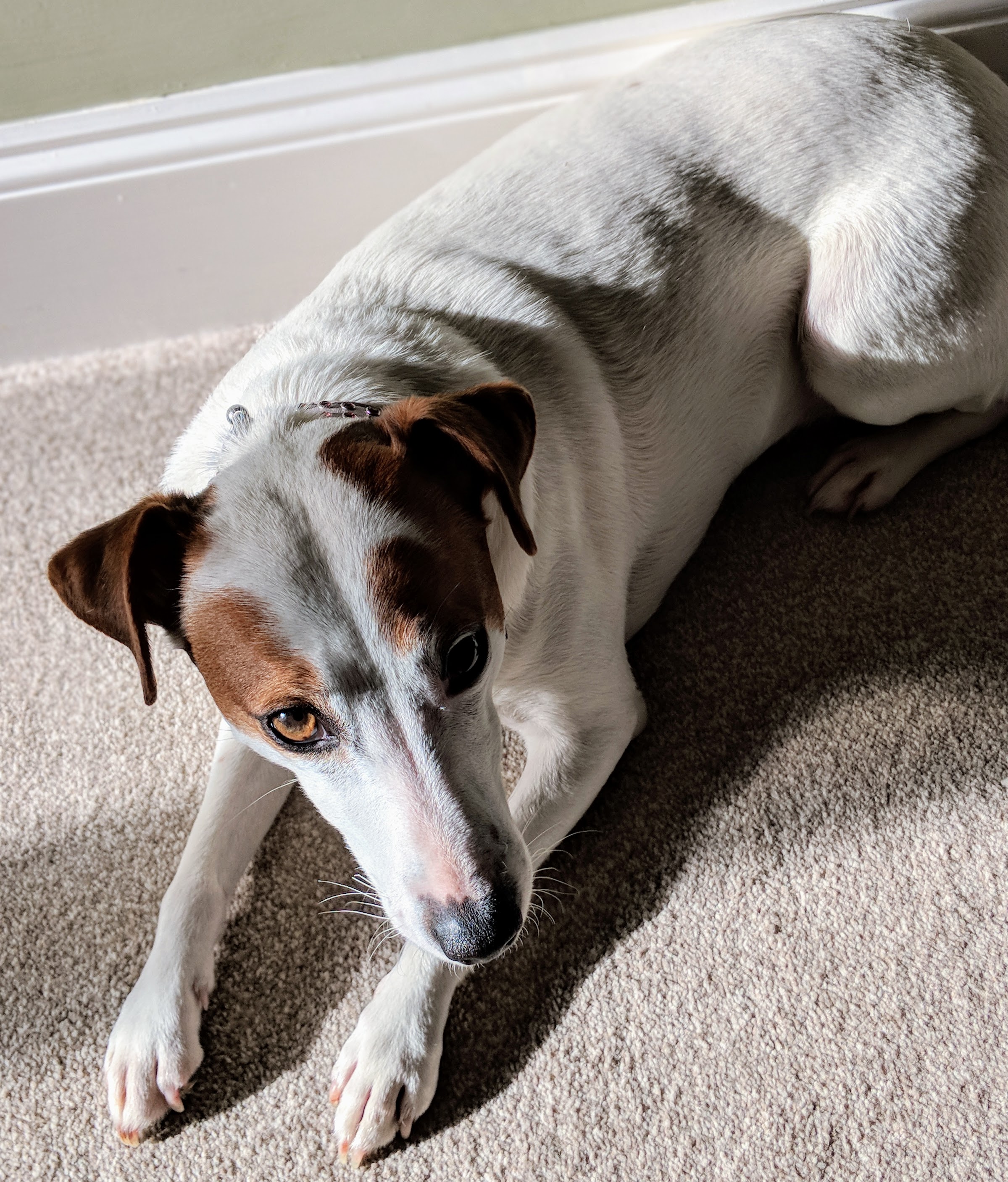 Her name is Coco and she lives up to her namesake by wearing a fashionable pink bedazzled collar. Every office needs a Coco. Period.

This is what I meant when I mentioned in the QnA that my weekly routine was going to change completely starting today and in anticipation of some of the questions that might be popping up in your minds right now, I have some answers ready.

On that cheerful note, I shall end this rather wordy blog post. But then again, when are they not wordy?

For all the tears I shed on that Tuesday, I can now say that I'm most definitely living my dream life. And how crazy is it that I didn't even know until recently that this is what that life would look like?