Oh, Lordy Lord. Do I have a story to tell OR WHAT?

But first, let's talk about this picture:

One of my favourite pictures made even more special by the memory of the nice man who took it for us. The kindness of strangers ❤

We were trekking down to the Princes Street Gardens from the Castle when we saw this bench. We all wanted to get a picture taken there and began to offer taking it for one another. That's when a man in a red shirt walked past us and heard us talking about taking a selfie to fit all of us in one frame. He definitely looked like he was in a hurry. But this man walked back to us and offered to take our picture. After we thanked him profusely, he waited around for us to check if we liked the picture he'd clicked and offered to take another one if we didn't. We were bowled over by his kindness especially after realising that he had been in a hurry when he actually stopped and offered to help us out. Soon after the picture was taken and pleasantries were exchanged, this man sprinted down the hill and disappeared. I will always cherish this picture for the people in it, but more for the memory of that kind man. The kindness of strangers never ceases to amaze me.

Right before climbing down though, Punchy and Pa wanted to shop at one of those Scottish tourist attraction shops that are usually called "The Scotland Shop" or "The Taste of Scotland". There are many of these all over the place and our touristy friends who spent a lot of time doing touristy things over the weekend, wanted to buy post cards and the like from this shop. The most interesting find in the shop however, was this little guy that somebody threw a tantrum to buy and bring home:

Somebody also named him Ser Megatron MacMuffin. He's a Kinght. He's cute (hence Megatron, if that even makes sense). And he's a pure Scot (hence MacMuffin, not McMuffin).

Also, this somebody needs to get a room:

These two need to get a room. Oh wait, they did. My bedroom. #mymanchild #sermegatronmacmuffin

On the evening that we adopted Ser Megatron MacMuffin (so-much-eye-rolling-happening-right-now), we booked our tickets to Glasgow and told Punchy and Pa that they had to be at the Station before 9 a.m. Promises were made, exhausted hugs exchanged, alarms were set, and spirits were high. So high, in fact, that at 8:30 a.m the next morning when The Husband and I were 5 minutes away from the station, HE REJECTED my suggestion to get good coffee before getting to the station because WHAT IF WE MISS OUR TRAIN?

8:45 a.m: We were at the station, crappy Costa coffee and four tickets in hand, sitting on a bench on our platform, smiling at the train that'll get us to Glasgow, waiting for Her Highness Punchy and Her Sighness Pa to finally get there.

9:00 a.m: I call Punchy to let her know that the train leaves in exactly 14 minutes.

9:05 a.m: Punchy texts me to say that they're just one stop away from the station but the goddamn bus is so slow it's not her fault.

9:14 a.m: The Husband and I remain seated on our bench, watching our train roll out of the station, as tears roll down our smiling cheeks.

9:15 a.m: The Husband and I walk to the inquiry to find out if there's another train any time soon.

9:17 a.m: I spot Punchy and Pa running around the Station looking like abandoned kids who can't find their parents.

9:18 a.m: I jump where I'm standing, waving my arms frantically to catch their attention, but they're stuck in bat-shit-crazy-panic-mode and don't see me.

9:19 a.m: We are all reunited. We curse their bus driver for driving slowly because "Fuck the pedestrians! His job was to get us here on time.". The Husband announces that the next train is in an hour.

From the minute Punchy landed in Edinburgh, she kept repeating one word: Dolly. Dolly the sheep was the first mammal cloned from an adult cell. She died in 2003 (aged 6) after giving birth to 6 lambs and her remains are on display at the National Museum of Scotland.

"I don't care where we eat. When can we see Dolly?"

So in the hour that we had left before catching our next train to Glasgow (that we were determined not to miss), we decided to take Punchy to the museum where she could finally see the stuffed body of her cloned sheep. But once we got there, we realised that Dolly was "travelling" at the moment and would return only in July. Poor Punchy had to settle for this:

Punchy and her Dolly. #dollyistravellingtheysaid

Don't they look adorable together?

I like how this story is shaping into a tale of losers in Loserdom.

We finally reached Glasgow where lost our shit when we saw how sunny it was:

The abnormal amount of excitement every time the sun comes out. #scotlandstuff #sunnyday

Where we saw many such amazingly talented buskers:

And where we met this guy:

The Duke of Glasgow. I'm serious. This is a thing.

At first, I thought it was just a joke. A one-time thing. Like, "Wow, someone went to a lot of trouble to do this.". 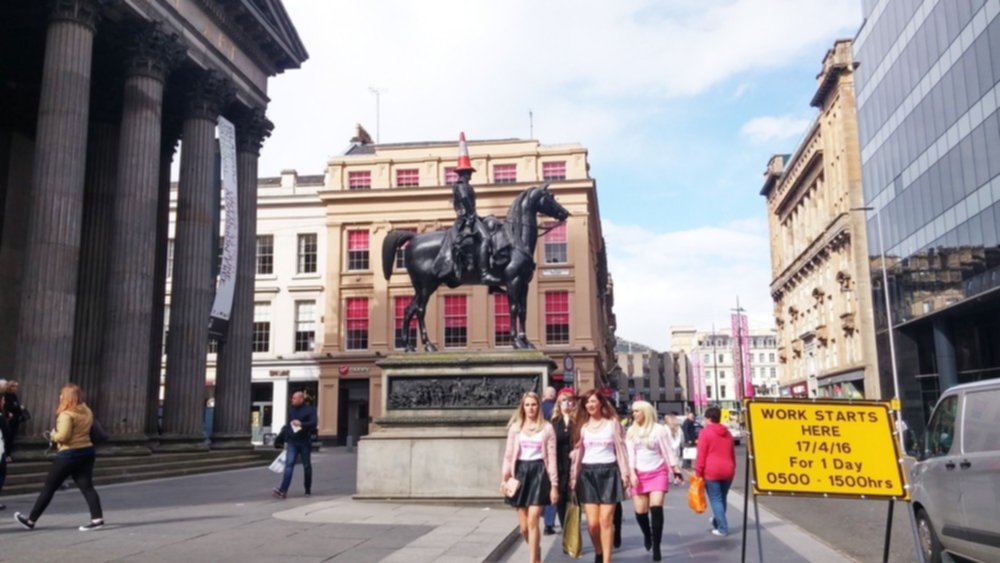 But immediately after, when we went to their Gallery of Modern Art, I found this (which now resides in my home): 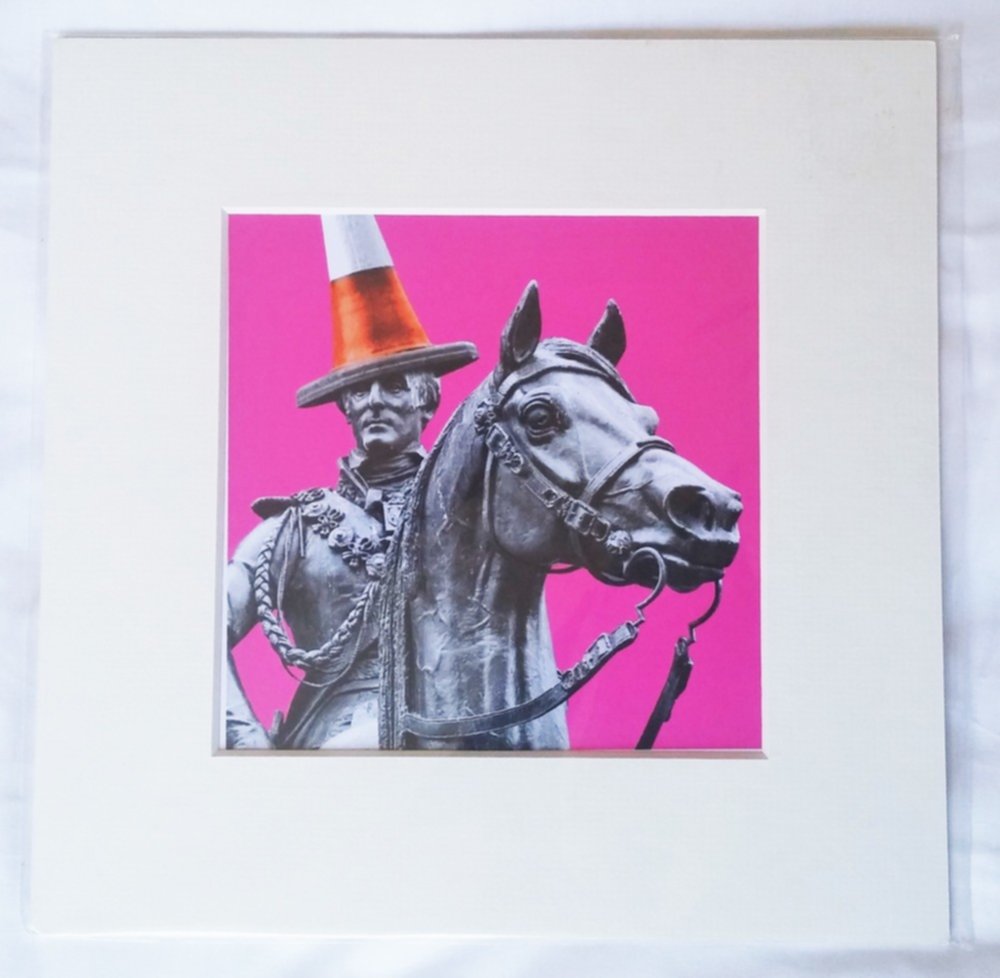 Some quick research revealed how this was a thing.

The equestrian Wellington Statue, most often featured with a traffic cone on its head, on Royal Exchange Square in Glasgow, Scotland, is one of the city's most iconic images. In 2011 the Lonely Planet guide included the monument...in its list of the "top 10 most bizarre monuments on Earth"...

Capping the statue with a traffic cone has become a traditional practice in the city, claimed to represent the humour of the local population and believed to date back to the first half of the 1980s if not before.

In a bid to reduce the cost of removing traffic cones from the statue, alleged to be £10,000 a year, Glasgow City Council put forward plans in November 2013 to double the height of its plinth as part of a £65,000 restoration project. The plans were withdrawn after widespread public opposition, spearheaded by a Facebook campaign called "Keep the Cone" (that accumulated more than 72,000 likes within 24 hours)...

I hope the Government never decides to find the traffic cone cool because people might lose interest in taking pains to put it up there. I'm so glad that I got to see it the way it was.

This post is getting too long. Let me conclude it with a few pictures from our trip.

This is Chop Chop in Glasgow where we went to find out which one was better. I'm pleased to say that we liked the Edinburgh Chop Chop better:

We went all the way to find out which Chop Chop was better. #thebestchinesefood #chopchop

This is from a time when I thought I should do Ross's Walrus imitation just 'cos I got my hands on a few chopsticks:

Who did it better? Me or Ross? #walrus #chopsticks #friendsfandom

This is when I thought clicking this cliché pic would be a cool thing to do:

This handsome dude and I 💑 #streetstuff

This is a cool wall art that can be seen all the way from the Necropolis in Glasgow:

This is my makeshift TARDIS for the time being:

When I almost found myself The TARDIS. Almost. #doctorwhofandom

This is when Pa clicked many pictures of us that make us look like R2-D2 and C-3PO:

This is us in front of The Elephant House in Edinburgh where J.K Rowling gave birth to Harry Potter:

Fan girls! Him too. #harrypotterforever

Have a nice day, you guys!!