I woke up one morning in February of this year to see this pretty face plastered all over the internet: 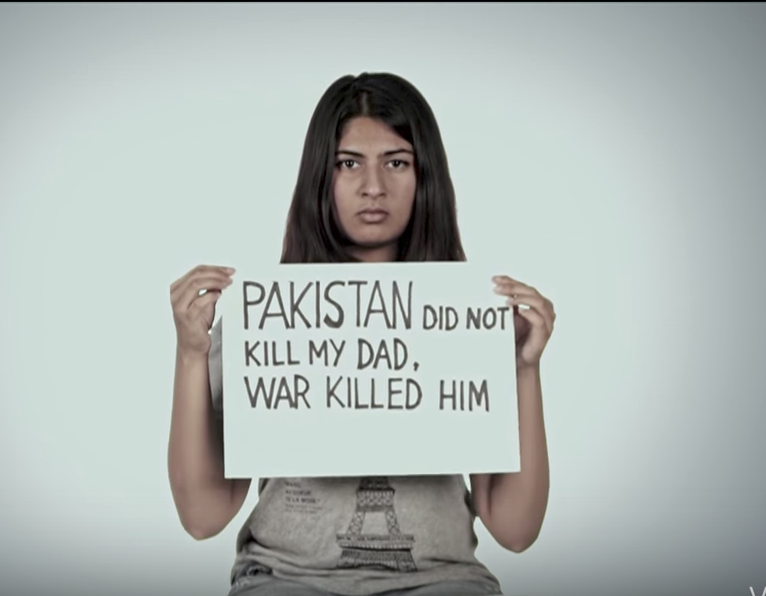 I read what was written on the placard and thought that this girl was putting quite a peaceful message out there, especially considering how she had to suffer the personal loss of her father during the Indo-Pak war in Kargil. Moreover, any Indian kid could testify to this: our movies, media, pop culture, and even history textbooks have done plenty to instill hate against this neighboring country from the time we, our parents and even our grandparents were young. From August 14, 1947, in fact. This message from a martyr's daughter stood out among all that noise as quite a refreshing contrast to what usually floats around the internet.

Within days, however, I started paying more attention to the headlines of Indian news articles that used this image. The words "Gurmehar Kaur" and 'Anti-National" were almost always placed side-by-side and with each passing day, the noise grew louder as popular celebrities and politicians had quite a lot to say about this 20-year old English Literature student from the prestigious Lady Shri Ram College of liberal arts in Delhi. Among these were claims that Gurmehar's Muslim friends and teachers were influencing her to sympathize with the Islamic Republic of Pakistan and that sympathizers of the rival country were anti-nationals who had to leave India and go to Pakistan. When a member of one political party stood up for her, another from a rival party stated that the former party was corrupting the mind of this young girl who was in turn, "abusing the motherland".

Celebrities like Virender Sehwag poked fun at her on social media which led to a ripple effect generating scores of memes about her, comparing her to the likes of Hitler and underworld don Daud Ibrahim. Not to mention all the rape and murder threats she received online.

By the time people began to claim that she was "exploiting the Kargil war" for sympathy and went so far as to call her a liar as "technically" her father was killed a month after the war officially ended, I actually wanted to get to the bottom of what had caused all this brouhaha. From where I was standing, this girl had just held up a placard with a peaceful message on it. What was the big deal?

Soon, I discovered this video from back in 2016 where she had partnered with Voice of Ram to release a Profile for Peace campaign:

I realised that the image of her holding up that placard was simply a screenshot from this video where she had shared the story of her father's martyrdom at Kargil and the subsequent effect it had on her with the aid of 36 placards. Of which, just one, taken on out context, was being circulated everywhere to brand her as an anti-national.

But there seemed to be too many missing pieces to the story and a simple google search only revealed a slew of articles hating on this girl and associating her with one political party or the other.

Finally, I realised that in February 2017, during a college fest, some kids from yet another prestigious college in Delhi (Ramjas) had invited two people from the highly politicized JNU (Jawaharlal Nehru University) to deliver a lecture. One of the biggest student bodies in India called the ABVP did not approve of this lecture and got the college authorities to cancel the invitations to the guest speakers. The kids who wanted to attend said lecture protested peacefully, claiming that they had the right to attend whatever lecture they wanted to. The ABVP then attacked these students on campus, pelting stones at them, pulling girls by their hair, and even orchestrating a lathi-charge.

Among the kids injured in this violence were Gurmehar's friends. All they had done to deserve this was silently and peacefully protest against the cancellation of a lecture they wished to attend. That evening, Gurmehar decided to use her influence on social media to stand up against the ABVP. She posted this image as her profile picture because she believed in the power of resistance by holding up placards: 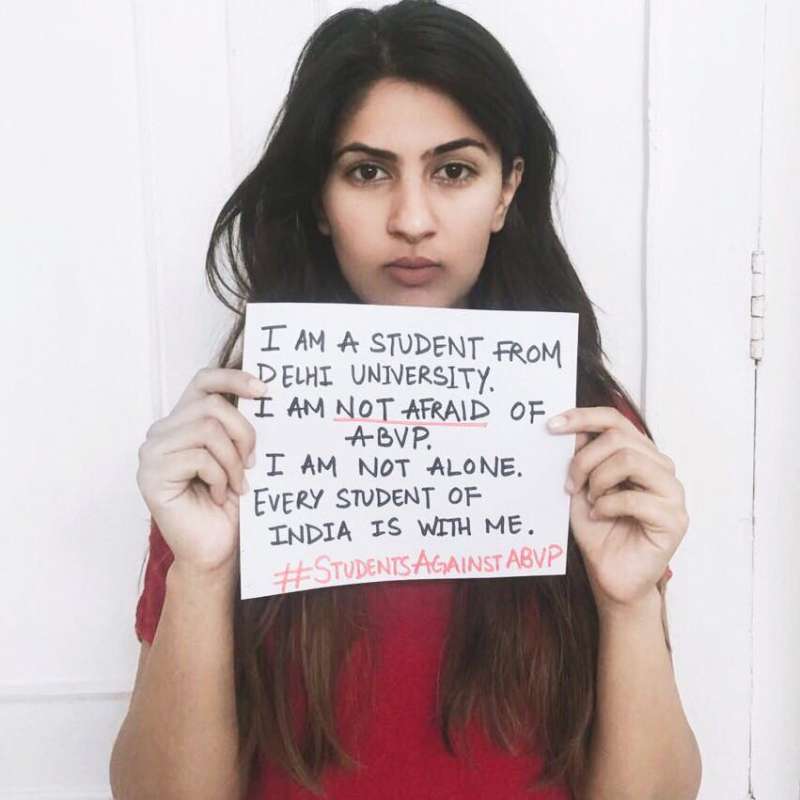 As this profile picture got shared a couple of hundred times and started gaining popularity, someone dug up that old video from her Profile for Peace campaign, took one screenshot out of context and circulated it on social media, branding her as a Muslim/Pakistan sympathizer and anti-national.

Within hours, the focus of the whole thing shifted from the violence on campus to the "anti-national sentiments" of Gurmehar Kaur. No one talked about the real issue at hand which was that seventeen and eighteen-year-old kids were physically abused and attacked by members of a student body organization that had political backing. No politician, celebrity or media person addressed this. All everyone had to talk about was whether or not this twenty-year-old had to be kicked out of the country for being an anti-national.

Here's Gurmehar's side of the story in her own voice: