Disclaimer: I'm going to take forever to get to the point here. But please bear with me - there's a pattern to this brand of crazy ranting sometimes.

Over this weekend, Shane and I discovered the work of art that is the series, Once Upon A Time. It's been a while since we binge watched something to the extent that we completely forgot to feed ourselves and had to resort to a snack of yogurt and granola at 11:30 p.m to gain enough energy to binge more of the show. Shane even volunteered to sprint to the kitchen to make the snack for us because he's "less clumsy and more efficient" than I am. I'm going to shoot that right back at him the next time he forces me to get up from my seat twice to add salt to his yogurt.

But it doesn't end there. The nerdy side of me which, while not as profound as that of my husband's, has also dug up beautiful editions of the Grimms Tales and the 1001 Arabian Nights and stored it in my Amazon basket. The only reason I haven't clicked 'buy' yet is because there are a few local bookstores I want to visit in order to evaluate all of my choices. You see, it hurt my ego a little bit when I realised that Shane knew more of Rumplestiltskin's backstory than I did, especially considering how he wasn't the one among us who grew up with a dad who read out fairy tales every night. It really hurt that his adult knowledge of even Hansel and Gretel was far superior to mine from 20 years ago. Did you catch my tone of justification in that last sentence? Precisely why I need to read all the fairy tales again, take notes and destroy him. But I digress.

I said it's been a while since we both enjoyed a show so much. And by the looks of it, Shane will not destroy this experience for me just yet. Have I never told you about his tendency to destroy every show I get emotionally attached to?

Almost every single time we start watching something together, we sort of make a pact to not watch any of the episodes on our own. We're very good at keeping that promise too. But no matter what we're watching, Shane simply cannot control his tendency to second guess the motives of each and every character, build parallel back stories for them, somehow make everything match up and finally predict their every next move. If he manages to see through something and predict the plot within the second episode, that's the end of that show for us. Orphan Black went down within the first few minutes when he screamed "CLONES!". Breaking Bad didn't last even five episodes, and no matter how many people told him that it's totally unpredictable in the following seasons, he refused to go back to it. Predictable, to him, is boring. And unfortunately for me, the promise to not watch the rest of the episodes on my own acts as a mental barrier, preventing me from going back to those shows ever again.

But with this show, oh how I enjoy seeing him struggle. At every turn, he tries to tell me what's going to happen, and at every turn the writers outsmart him. And the best part is that this is a show that anyone would think is quite predictable. It throws us bones from time to time, and there are some things that are quite obvious from the beginning. But it's so well written and structured that Shane's finally shut up for considerable lengths of time, and allowed me to enjoy it in peace.

The drawback of a show that enthralls him thus is that he wants to consume it all at once. Fuck sleep, fuck everything else, it's time for gluttony. So at 2 a.m last night when I tried to convince him to please go to bed with me, his response was, "Three episodes more and we can go. I promise".

It's a good thing he takes his other promise very seriously - the one of continuing to watch remaining episodes only with me - or there was no way he'd have come to bed after I'd stormed off.

Sleep. I need lots of it (nine hours mostly) and if I don't get it, I get cranky. Which is why we set our alarms for 8:30 a.m so that I can fully wake up by 9:00. And because I get cranky when snatched of my sleep indulgence, I try to make it a point to not stay up later than 1 a.m if I can help it.

2 a.m last night was stretching it.

So when, after we were in bed, he asked me to turn around and hug him, and I said that I was too comfy turning the other way,

and when he climbed over me to the side I was facing so that I could hug him while I was already comfy,

I almost breathed fire and burnt his face off.

I'm sure that after all his shenanigans, by the time I finally fell asleep, it was at least 3:00 a.m.

So when I woke up to his characteristic earth-shattering, bed-shaking, ground-quaking laughter at 8:00 a.m, a whole hour before I was supposed to drag myself out of bed, I wasn't pleased, to say the least. But it's one thing to be startled awake with fluids oozing out of your mouth and eyes. It's completely another issue to have a screen and it's light stuck right in front of your eyes when you're trying to go back to sleep.

When he saw that I was stirring and wiping the drool and tears off my face, he just had to show me what had made him laugh out loud.

And when my poor sleepy brain made me let out a confused "whaaaaat?", he took it literally and explained the whole point of the joke to me the way you would to a four-year-old. Poor Ankita's so stupid, she didn't get the joke.

Try, poor Ankita's so sleepy, she could shove a pineapple up your arse!

After he was done explaining the joke in detail, by some miracle of God, I fell back asleep as he went off to shower.

He got back from his shower and jumped on me and kept screaming, "It's poop o'clock" with his nose pressed against mine. The weight of his body was not letting me move an arm, let alone turn my body away from the noise. His explanation was that he was just training me for the time when we get a puppy because surely, our puppy would jump on us every morning and ask to be taken out to pee and poo?

When I pointed out that he wasn't a puppy, he LICKED MY NOSE just to prove a point.

Tomorrow, we turn two. Number Two. It's actually Poop o'clock here at the Shankita Household, with us having been married for two years and together for six. One of us is still mentally six, and that's something I would have never said a few years ago. With time, Shane has shown me the child in him, the adorable yet slap-worthy child in him, and with every passing day, I try to tell myself that I am indeed worthy of his innocent love.

This was us exactly at this time two years ago, when he and his family came over to my home for the traditional wedding eve ceremony of handing over my wedding dress. 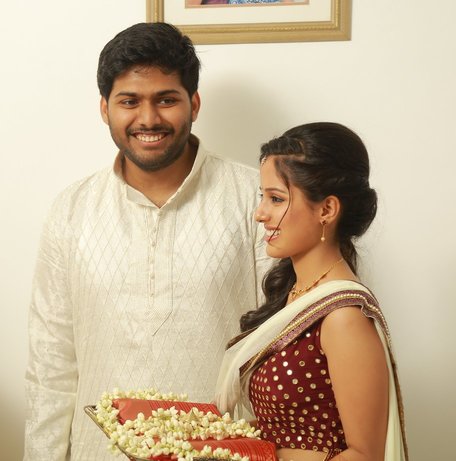 I'm not sure if traditionally, the groom is even allowed to part-take in this function, but this one stormed his way in anyway :D

And just like that, with every minute of sleep I lost because of him, he stormed his way into some cold, remote part of my heart too.