Sharing the piece I wrote for mydogstories.com a while ago.

Something exciting is happening tomorrow, and from the time I woke up, I've been missing both my dogs from back home. They're both no more. I've only ever written about the first of them to leave us. Writing the second story might kill me. But you can check out my About page where I've shared a little bit of it.

A date my family can never forget. At 6 a.m in the morning, my father woke me up to tell me that my chocolate brown Labrador was missing. That he'd probably run off. That he'd missed his breakfast. That it probably wasn't too late. That if we hurried, we could still find him and bring him home. I was one of those college kids who never sacrificed a good night's sleep for anything. Waking up early even during my exams was a rarity. But the minute I processed the words "Frisky" and "missing", I jumped out of bed and got dressed. As my father and I descended down the stairs, my mother called out to us. She'd found him. But something in her voice seemed off.

He was found in the western part of our compound, his back pressed against the wall of my house. Eyes shut, still as a stone. I bent down next to his limp body that never stayed still even in his sleep and saw a trail of ants entering his eyes. Those beautiful, expressive, mischievous hazel eyes. He must have left us more than half a dozen hours ago. "When was that exactly?" I kept asking myself. At 8 p.m on the previous night, I had petted my dogs. I'd spoken to them and said goodnight. He seemed just fine. So how could this have happened? The more I thought about it, the more I began to convince myself that maybe he didn't look so fine after all. Maybe there was something troubling him and I just failed to notice it. I kept thinking about the ways in which we could have saved him, of all the things we could have done differently. For weeks after his demise, I played this blame-game in my mind, this constant cross-examination of facts, trying to figure out how none of us had noticed anything.

He had puked blood on that fatal night. And he had succumbed to whatever force took away his precious life from us while the night was still young. The only conclusion we could draw was that it might have been a snake bite. Or maybe he swallowed something that he shouldn't have. It happened overnight without a warning and left a gaping hole in our lives.

He was four. Still a baby. Still immature. He'd jump up on the couch and pull out the hair ties my mother and I used to secure our hair with. He'd freak out whenever I hugged my dad in front of him. It was amusing because he either thought that I was attacking him or he felt possessive over his dad. He hated his baths. He loved his long walks. To be honest, he walked me instead of the other way around. To be even more honest, he mostly ran while I desperately tried to keep up. Whichever part of the house we occupied at any given time, without a doubt, our dogs would be somewhere nearby, listening to our conversations, understanding everything we said, and participating in political debates with the occasional "woof". It's been seven years since I lost him and I never mustered up the courage to write a word about the pain I feel every time I think about him. I never wrote the story of one of the greatest losses I experienced in my adolescent life because writing about it would make it real. And I'm not sure I'm ready to say goodbye to those hazel eyes yet.

I don't have a single good photo of him because he simply would not stay still. That puppy sure was a handful. 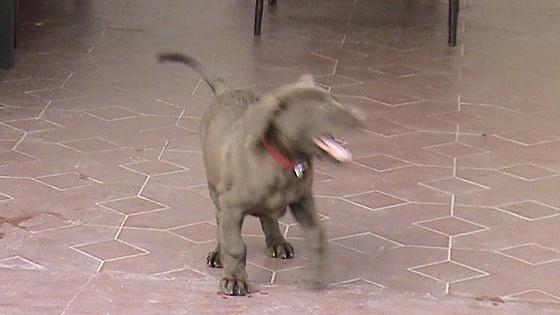