Ever since I returned from India almost a month ago, something weird's been going on in my brain. Actually, I'm not sure if it's my brain that's doing it and for all I know, it could be my veins. Because guys, it feels like my veins have been injected with glitter. I'll explain in a minute.

Longtime readers of this blog will know that I'm a chronic complainer about everything sleep-related. I fuss about it more than most things in my life and have many unrealistic expectations of my sleep cycle. But so far, there have been two main areas related to sleep that I have always fussed about.

This is where I get to the glitter. Or so you think until I trick you with another barrage of unrelated ranting.

Ever since I returned from India, I've been super-productive, happy, busy in all the right ways, spending quality time with my husband, regularly meeting up with friends, exercising consistently, reading to my heart's content etcetera. Basically, life's good. But at the end of a seemingly long day in which I've gone about checking things off my to-do list and fulfilling even my personal goals, I've noticed how I'd get into bed by about 11 p.m and find myself completely unable to fall asleep. This is a very familiar feeling because a lot of times in the past when I have attempted to set a fixed bedtime for myself, I have often felt like giving up entirely after hours of forcing myself to sleep and instead, have had to fight back the urge to stab my ear with a fork. What usually follows is a complete incapability to wake up when the alarm goes off in the morning, which then results in a rushed and crappy morning.

Here's where I talk about the glitter. You see, this time around, the difficulty to wake up is non-existent and I haven't had a crappy morning in ages.

Here's a conversation about this that I had with Meenal, my designated personal medical consultant:

A: "I simply cannot fall asleep at night. I go to bed, listen to a podcast or something that usually helps me drift off and then I lay awake for a couple of hours until I pass out I guess."

A: "I've cut down to just one cup of coffee in the morning and maybe a green tea in the evening."

M: "Are you feeling drained and tired constantly?"

A: "Oh no, that's the thing. I'm up at 7 or 8 am every morning, often before even the alarm goes off. And I don't feel tired at all. I just jump out of bed and get my day started."

M: "So you're saying that you're not too exhausted at the end of each day and you have no difficulty waking up early each morning and that you're absolutely fucking fine."

And that, there, was my Holy Christ, this is a miracle! moment. I realised just then that I basically have what I have wanted for a long time - to be able to wake up early every morning and not feel tired - and yet there I was, complaining about it.

I also realised by the look Meenal was giving me (on Skype) that had she been in close proximity with me, she would have just shut me up by hitting me in the face with a sack of bricks. Repeatedly. And then, the miracle would have been if my face remained in its original form after she was done with me. I say this because right now, that poor girl is preparing for a State exam that she doesn't even have the dates for. Day in and day out she spends an inordinate amount of time studying with no end-date in mind and I would totally excuse her if she wanted to vent some of that frustration by disfiguring my face for complaining about having too much energy each day.

It was on one such energetic evening soon after that exchange that we interviewed Dr Sherry, a women's health expert and the OBGYN of Hollywood Celebrities like Reese Witherspoon and Jane Seymour. It was the most eye-opening, informative and empowering conversation about female reproductive health and I really hope you listen to it when you get the time:

So after the episode went out this morning, Meenal and I were discussing how our audience would react to this considering most of our South Asian listeners are a bit conservative. And then, in the span of one hour, we had one of those very short exchanges that perfectly captures our dynamic. 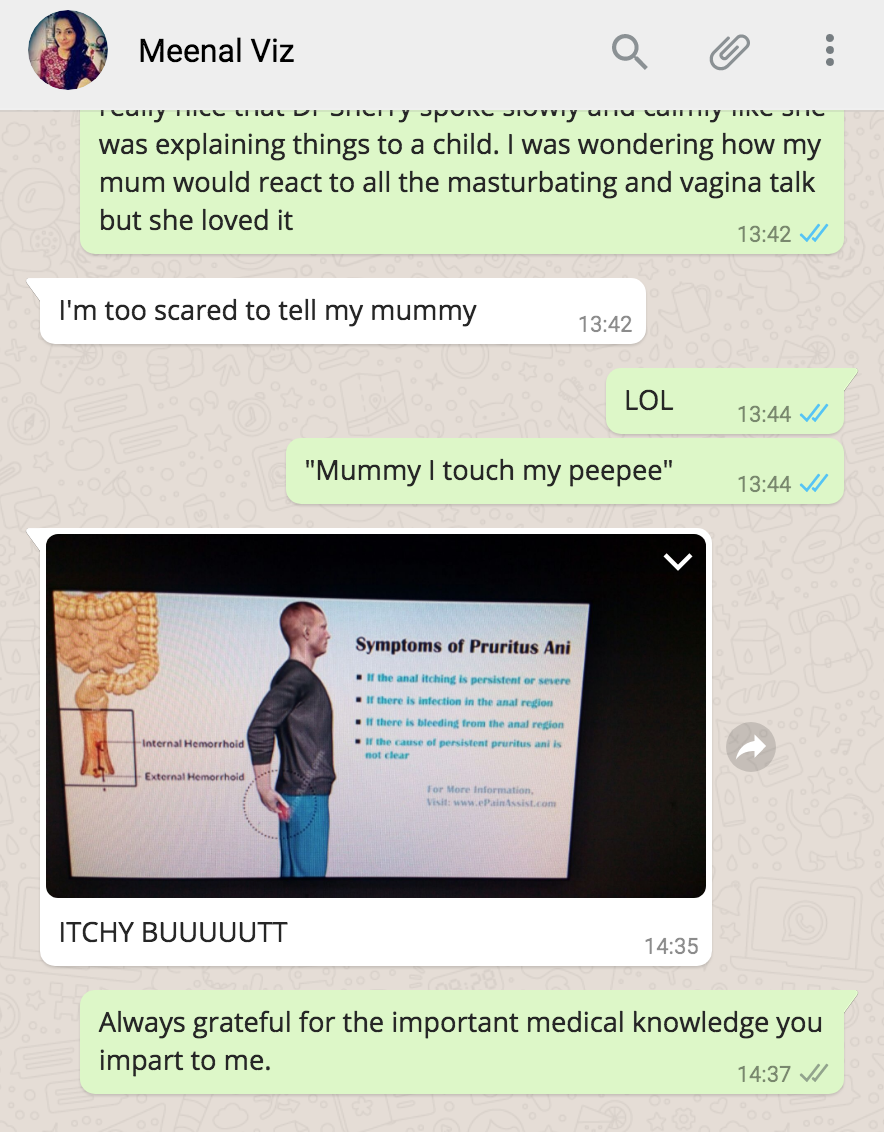 This exchange actually took place while I was typing this post. In fact, the "ITCHY BUUUUUTT" message was sent to me exactly while I was typing the sentence about her being my "designated personal medical consultant" and I just immediately knew that I had to include this screenshot here.

And if that doesn't fill your veins with glitter, you need to see a doctor.