Yesterday morning, I was feverishly typing out a rant with some unsolicited advice for you guys. I was so invested in what I was writing that I didn't check my watch, or clear out the table after breakfast. But towards the end of my piece, I decided to refresh the page. Don't ask me why I did that. I just did.

That's when I realised that my internet connection had been lost. For how long, I knew not. My drafts usually get auto-saved as I type. But with no connection, I had no clue when all the saving had stopped. For all I knew, I'd lost my entire piece. That loud sound you all heard yesterday at around 10:30 a.m BST was the sound the screen cracking when I smashed my head against my laptop.

So I reluctantly got up from my seat, climbed on to a chair to reach for the Modem that The Husband had not-so-considerately placed on the topmost rack of our bookshelf for reasons I will never understand. I turned it off, counted till 5, and turned it back on. Nothing. I repeated this exercise THRICE and that's saying something because I'm not known for my patience at all. Still, nothing. So I gave it three more goes, this time, counting Mississippi-wise. ONE-mississippi, TWO-mississippi, THREE-mississippi, FOUR-mississippi, FIVE-mississippi. The events from yesterday taught me to be so patient that I even patiently typed out that painful last sentence. Still, nothing. My only connection to the outside world was my mobile data.

While all this was going on, I had been sending message after message (in ALL CAPS) to The Husband because to me, anything that has to do with technology fucking up is all his fault. And for some reason, he wasn't even checking his messages. Frustrated, I turned into my mother. I began to obsessively clean surfaces in my house while compulsively staring at the Modem. WOULD YOU JUST FIX YOURSELF ALREADY, INTERNET-PROVIDING-THING?

Believe it or not, in the middle of all my cleaning and cursing, I received this e-mail (yes, e-mail!) titled "Fucked" from The Husband: 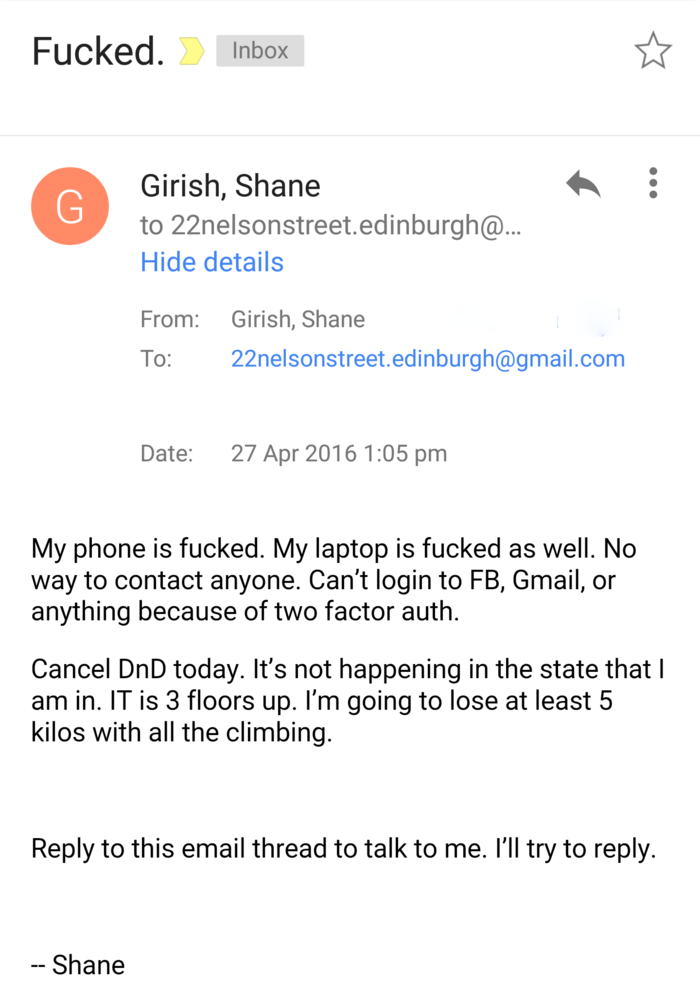 I took that as a sign that I wasn't meant to publish yesterday and relaxed a little. It's not like I can't type anywhere, I just couldn't publish or send in drafts or respond to e-mails. Moreover, I would have died of panic had this been a problem with the hosting service for my website so I convinced myself that this was hardly the worst thing that could happen to me. I could function. I could survive this. So I sat down to get shit done while wondering how our parents' generation survived without the internet. How did they get anything done without being able to watch Youtube videos titled "How to clean your toaster" on the side? Oh, I'll tell you how they got work done. By NOT getting distracted, that's how. Believe it or not, yesterday was one of my most productive days ever. I finished many drafts, cleaned the apartment, took a nice long shower, listened to a whole audio book (!) and even made dinner.

The only thing left to do was get eggs. So I sent The Husband an e-mail telling him that he should bring eggs on his way back. Being the whiny man-child that he is, he let me know that he wasn't going to the store alone. If I wanted eggs, I had to go get them with him. I'm so used to this tantrum by now that I don't even get annoyed any more. I just sigh and do what needs to be done. God, I'm going to be a sucker, a pushover, as a parent!

So I sent him e-mails, letting him know that I had started from home, and that he should meet me at the reception in 10 minutes and that I had reached his work and that I was getting very pissed off with all the waiting I was being made to do, all for 6 eggs. I sent him 16 e-mails over a period of 54 minutes to let him know that I was waiting. Nothing. Did I mention that his phone got destroyed two weeks ago and he's still not fixed it so e-mails are the only way to get in touch?

I made the reception call his office. Twice. No answer. So finally, I walked down to his office, caught hold of a nice man who was leaving work and asked him to please go back inside and let my husband know that I am having his head for dinner. The funny thing is, I was so mad, so SO mad that I was fuming in that hallway. But the second I saw him, I burst out laughing. It was so frustrating because I wanted to let him know that I was really angry. But I couldn't stop laughing. Moreover, he didn't even look apologetic, just confused because I never usually go all the way to his office like that. As it turns out, none of my e-mails got delivered. Apparently, even he'd sent one asking where I was and that didn't get delivered to me either. I got it later by around 9 p.m. but what use is that, huh GOOGLE?

What I'm trying to say is, yesterday was a fucked up day. I lost the piece I had typed out, I couldn't publish anything or send drafts to others, I was quite helpless. And so was Shane. The poor thing had to resort to playing Candy Crush (soda version on a desktop as I later learned) to while away the time as he waited for his laptop to get fixed. A lot didn't go our way. And I realise that there will be more days when a lot won't go according to plan. But the thing is, I didn't die yesterday. The earth didn't stop spinning on it's axis. The Sun still set and rose on time, and Governments, Democracy, Freedom et cetera are still intact. I realise now that nothing is a big deal. I realise that we all need to calm our tits, hakuna them tatas and take it easy. Relax a little. Because the world is not going to come to an end just because something didn't go your way.

Have a great day! Hakuna Matata!