When I'm looking forward to something, I tend to say things like, "Next week, by this time, we'll be there" or "Tomorrow by this time, I'll be free". Similarly, when I miss something from the past, I say, "Last week, around this time, we went for a movie" or "Last year, on this very date, we did ______". This is something I picked up from my mom. This, and my weirdly good memory. My mother never forgets important dates, incidents, conversations and people. The only difference is that being a generally happy person and a good human being, her brain naturally sifts out only the good for her to remember. I do the rest. Which is why she's very forgiving of people who have walked all over her and tends to only remember the good memories she's made with them at the end of the day. But when I see her gravitating back to someone who hurt her, I go up to her with a registry of events, complete with date, time, direct quotes from people, and logical reasonings for why she should deter from letting them back into her life. I see this as my attempt to "protect" her from harm but we all know that I'm just a shitty person and she's not. It's as simple as that. 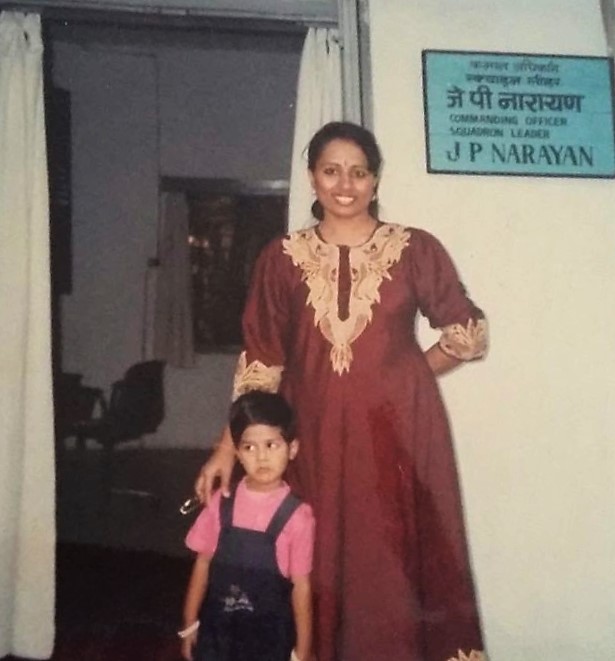 See, this photograph is a classic example of my mom thinking happy thoughts and me plotting revenge and coming up with elaborate torture techniques. But I digress. My point is that I inherited my weirdly good memory from her although I use it for completely different reasons.

This good memory thing, however, is oftentimes annoying because she holds me accountable for things I may have mentioned to her in passing. She remembers every aspect of a 20-minute phone conversation with me, and if I casually mention that I'll be going to the dentist in three days, she'll call me on the third day to ask how it went. This is very sweet most of the time but like all humans, sometimes, I slip. I make appointments and sometimes, I don't see them through. Being the kind of person I am, not seeing something through makes me feel like a failure even when I know that no one's watching. It makes me feel like my whole life is falling apart. Then comes the phone call from my mom, asking me how it went.

This is something that happened a few days ago. Not all things were going according to plan and I was internally chastising myself for not getting enough done when I got a call from my mom.

"Hey, did you finally do 'x'? Also, didn't you say you were going to do 'y' by this evening? I'm asking because I didn't see 'y' and it's already the evening", she said.

This 'x' was something I'd been intending to do for close to a month, and for an entire month, every once in a while, she'd ask me if I'd finally gotten around to doing it. And not having done 'y' was already making me feel frustrated. So I snapped at her.

"WHY do you have to remember every minute detail and question me like this? I'll do it when I do it and when I do, you'll see it. There's no need to breathe down my neck", I hissed.

But as I said those words, I kind of knew what was coming. Had I been in the same room with her, I would have seen the change in her expression and heard the change in her tone as she chastised me for mine. But I was blown away by how calm she was when she spoke next. She simply said, "Well, for as long as I'm alive, you'll have someone who'll call you every single day and ask you questions about your life because I really care about it. Your parents and maybe Shane are going to be the only ones who are genuinely interested in your life and truly want you to do well. Not that I can predict the future, but in a decade or two, we might not be around and you'll have only Shane."

And then wistfully, she added, "I wish I had someone who would annoy me with questions about my life".

That was it. I didn't apologize for snapping at her, she didn't demand an apology or even get mad at me, and we moved on to another topic. But what she said has remained in the back of mind ever since. I began thinking about all the doctor's appointments my parents have repeatedly told me about. I remembered all the times they've sent me messages saying they were going out for a movie or for lunch because they didn't want me to try and reach them, and get worried upon not being able to get through. And without fail, every single one of those times, I've completely forgotten about those appointments and called them. I've sometimes interrupted their leisure time and sometimes, wondered why they weren't answering their phones. Simply because I was too selfishly involved in my own life to pay enough attention or to take the effort to remember what's going on in theirs. I realised that it's quite true that your parents are the only ones who will actively take interest in your well being no matter how old you get. I'm not a parent yet but I guess it makes sense when people say that they never loved their parents as much as they love their kids. So I probably don't reciprocate the same amount of love I receive from my parents either.

And this realisation became stronger with every passing day. Yesterday, when I video-called my dad, he started applying cat filters and flower crowns on his head to make me laugh. He leaned forward to "kiss" me through the screen. My mother walked in on this call and said she wanted to plant kisses on me too. When I showed my dad a bulb-like pimple that had erupted on my cheek, he said, "Okay let me kiss it better, then".

Later, they followed up on the pimple situation, the night-terror situation, suggested remedies, and made me feel like a celebrity.

There's no stopping them. But I think I quite like having them holding me accountable, asking me questions, caring about my life and kissing my boo-boos.

Have a wonderful weekend, everyone! I'm taking this evening and the whole of tomorrow off. No emails, no phone, nothing. It's going to be great.