I promised myself before I started writing this post that I wouldn't say anything even remotely connected to the passing of time. The fact that the very next sentence you will read is going to be about JUST THAT gives you a glimpse into the discipline and self-restraint my military dad attempted to instil in me from a young age.

I hear a lot of people saying that January is one of those months that never seems to end, mostly owing to the fact that people look forward to it more than any other month of the year, but once it finally arrives, it seems to drag on forever. On the flip side, people say that February usually ends before it even begins considering both the shorter length of the month as well as "the great escape" from Jan.

For me, however, the month of February has seemed to be longer than ever so I shall refrain from my usual reaction to most of my Monthly Braindumps which is that I can't believe the month is over already. Because I seriously cannot believe that we've just gotten to the last day of this month and I'm not even the slightest bit disappointed by that fact. Granted, I have a lot of amazing things to look forward to in March, but a part of me doesn't want February to end just yet. It has simply been the best ever.

I have received good news upon good news from the beginning of this month, some of which I will be sharing with you in about two weeks from now, and some, two weeks after that. There's A LOT happening in March and as much as I'd like to say that I can't wait for those adventures, I would also like to take a step back and cherish these days leading up to them. Because I recently had this sudden awakening:

The feeling you get when you hear good news or start looking forward to exciting things, is in a way, more likely to make you want to break into a dance in the middle of the road than when you actually do those things.

And here's another one I just had:

Sometimes, reading your own words of wisdom out loud can give you a throbbing pain in the back of your head.

Quite convinced all those philosophers died of a headache.

I think the cherry on top for me as far as this month is concerned is the wee blanket of snow covering most of Britain this week as a gust of cold winds from Siberia has swept across all of Europe, arriving in Britain last afternoon. That said, things are starting to look a bit scary now because Scotland has been issued a red extreme weather warning that is due to come into force in the next hour or so. I really do hope everyone stays safe under the circumstances, especially the homeless who have thankfully been receiving aid from various agencies in the past twenty-four hours 🙏

But personally, in the three winters I have spent in this country, never have I experienced proper snow where I could go out and play in it without getting totally drenched and/or slipping and falling on melting ice. 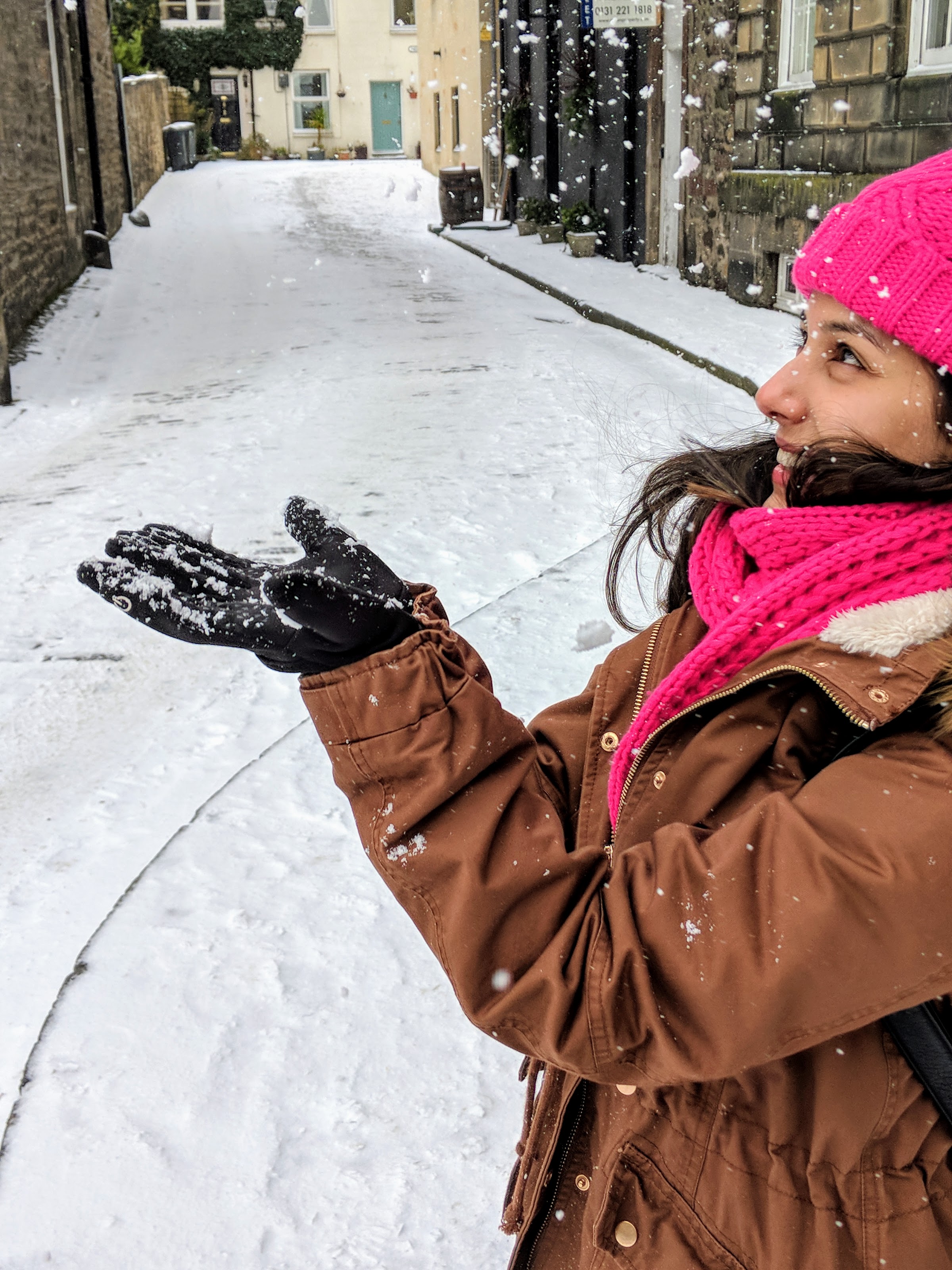 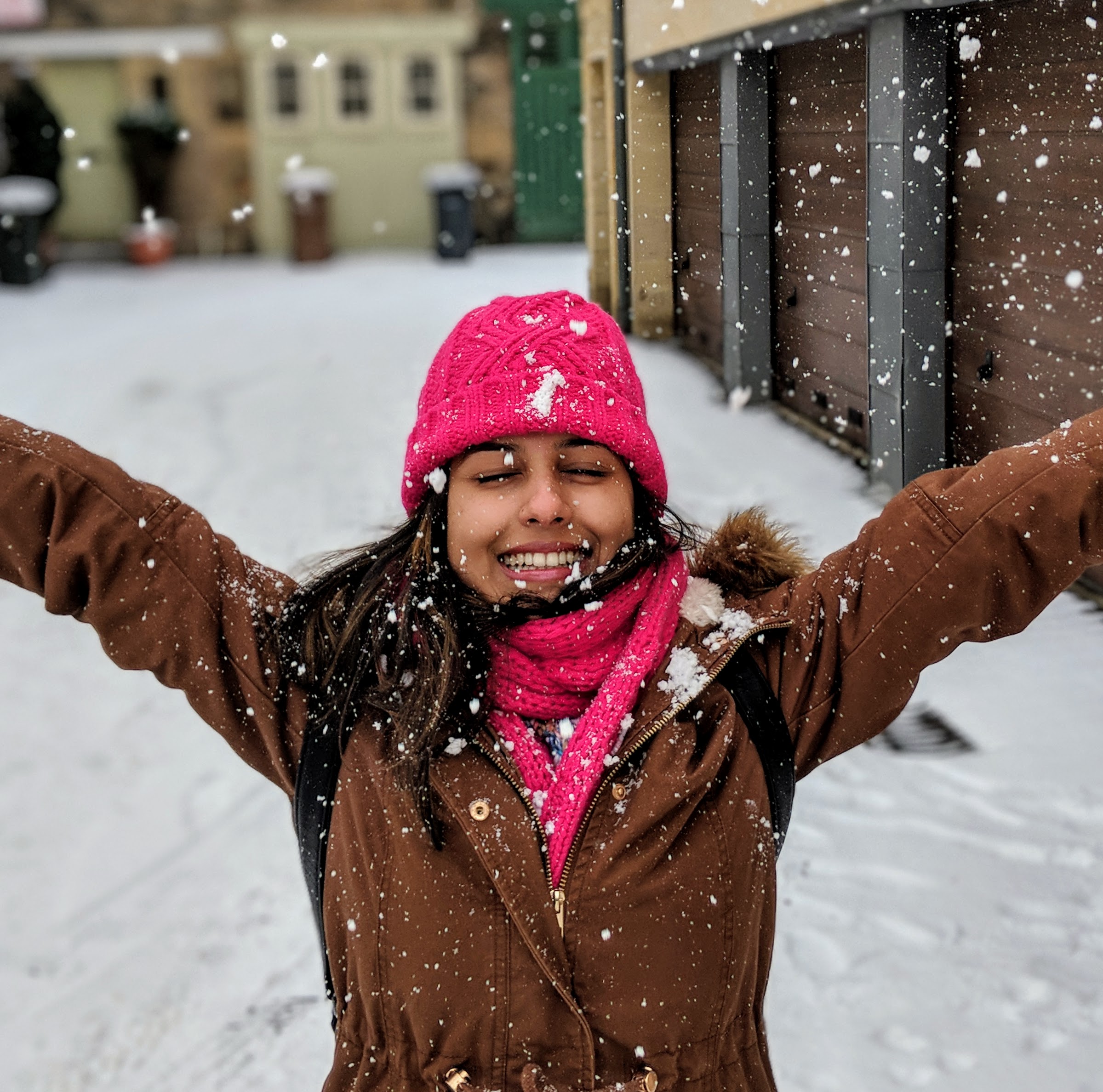 And I swear my hands are not that gigantic in proportion to my tiny body. It's just that my winter gloves are a bit big for me BECAUSE I DIDN'T SHOP FOR THEM AT THE KIDS' SECTION.

This sudden, unexpected spell of snow, while we were making good progress towards spring, has turned out to be such a dream come true for someone like me who was raised in the tropics WHERE WE DON'T HAVE FOUR SEASONS. And right now, I'm finding it very hard to slap that stupid grin off my face as I march on to the month of March, the very month THAT HAS GOOD THINGS IN STORE ME if I hadn't driven that point home already.

I'm going to step aside to a corner and give myself a pep talk about controlling the urge to type out entire blog posts in capital letters every time I get a little excited. In the meantime, I hope you're safe and happy wherever you're reading this from and I will see you soon!