When I went to bed last night, I was so tired that I was pissed off. And so pissed off that I'd already decided that today was going to be a bad day. I snapped at Shane for not helping me clean up after dinner last night and this was not the usual kind of snapping where I don't want him to help in the first place. This was genuine snapping because I'd asked him to carry our plates to the kitchen and load the dishwasher while I got some work done with Meenal. But Meenal had called for the first time in three days and everyone at 22 Nelson Street was excited. So he left the plates in the sink and completely forgot to load the dishwasher. I had to do it at 2:30 a.m while I was crawling to the bedroom.

At 9 a.m this morning while Shane was in the shower, my brother-in-law woke me up. Actually, he asked Shane to wake me up because he had something important to discuss with me. This is something he does often where if he has something important to communicate with one of us, he gets in touch with the other first. Because he knows fully well how we're anti-social and respond promptly only to each other. It's a good strategy.

As I lay in bed after talking to my brother-in-law, Shane walked into the room. Like I said, I'd made up my mind last night that today, I was going to be moody. So I ignored him and pretended to look at my phone. But he quietly climbed back into bed with me and started cuddling me. While I enjoyed the cuddles, I attempted to make it clear to him that "I'm still mad at you, though".

"Chan - are you - tho?", he asked. And I burst out laughing so hard that I feel ashamed of myself. So much for willpower and the resolve to be miserable.

Also, for old time's sake, and for our love of Chantho, I'm going to leave this here:

We slept at 2 a.m because we were getting this ready:

And for all the sleep deprivation and the grumpiness that followed, I watched this upon waking up and felt happy for being able to do this. I felt grateful for Meenal and her silent farts while she sleeps, and for all the good times we got to spend together. By the way, Meenal wants me to make it explicitly clear that the thing about the farts in the video (and this post) was meant as a joke and that her body, like my father's, does not perform gastrointestinal activities.

This reminds me of a conversation I had with my friend Steffy from school. We were probably in the 7th or 8th grade when a boy in our class burped in front of everyone. Being the snob that I was back then, aspiring to be my father's daughter, I exclaimed how disgusting his behaviour was. I followed that up with a proclamation that I don't burp. Ever. So Steffy remained silent and thoughtful for a moment before asking me in all seriousness if I ever farted. Now, I had to keep up my image. So I replied in all sincerity that I never indulged in the base human act of expelling gas from my ass. Following that, both Steffy and I broke eye contact and looked into the distant horizon.

My point is, I used to be a Meenal once upon a time.

But speaking of Meenal, the reason she called after a gap of three days is because she was in Germany this weekend, kicking ass at an indoor cricket tournament. She was the only female player there and ended up winning the 'Man of the Match' on her first day. She was also asked to retire after scoring 25 runs because apparently, that's the maximum you're allowed to score in indoor cricket. Everyone needs to get a chance to play, you see.

As you can imagine, I was very supportive of her and her sports...thing and kept sending her reassuring messages throughout.

I also ordered from the same Chinese place and sent her a picture of the prawn crackers she was missing out on because she chose cricket over me. 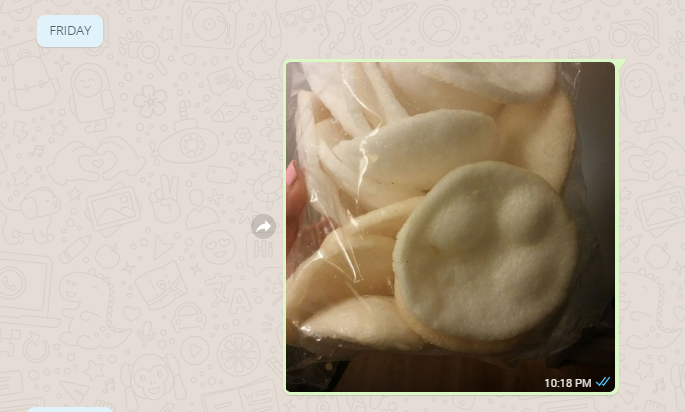 So with the next ball, she smashed a 4, and then turned to him and said, "Excuse me, but did you just call me a pussy?"

"OH HELL YEAH I'M A PUSSY. Because pussies can bring tiny chubby humans into this world while a flick to your balls can leave you incapacitated for weeks"

She didn't actually say that last line. It's just what I've trained her to say next time.

Anyway, I feel that a lot of her will-power and energy is beginning to rub off on me too. You see, I exercise on the cross-trainer for a specific amount of time on most days of the week while increasing the level of difficulty each day. But on Friday, I went an extra 5 minutes at the highest difficulty I can manage because I thought to myself that this is what Meenal would do. And yesterday, I went an extra 10 minutes at high difficulty for the same reason. When I got out of the gym, I was sweatier (staaaaankier) than ever and so red in the face that I resembled a baboon's arse.

But it turns out that I've had an influence on her too. Apparently, after reading my blog post where I shared my experience of showing up to work hard even on days when I didn't feel like it, she decided to go to the gym even when she was way too tired. She thought, "Ankita asked me to show up and I'm going to show up". So she got on her treadmill and started running. And she ran for 9 kilometers and felt good about herself. But the minute she stopped running, she puked all over her treadmill. Yep. She then borrowed cleaning equipment from the gym and thoroughly cleaned up her puke from the treadmill while still feeling weak and queasy. Yeah, that kid has issues.

So, that's my braindump for this month. These braindumps are my favourite because I can go on any tangent I want and unload everything that's going on in my brain. I honestly don't know how many of you even enjoy these but these are the posts that I have most fun writing. Anyway, I've rambled on for close to 1200 words so I should stop now.