The last time you heard from me was on the 21st of Jan, exactly a month before Shane's birthday. The first twenty-one days of this year were by far my most productive. I woke up at a certain time each morning and got some writing done, went on date nights with Shane once a week, exercised twice a week, cooked at least thrice a week, and still found time to socialise with my friends. It was marvelous!

And then there was a whirlwind and my house of cards came tumbling down.

Last Sunday, as I sat down with my planner to see if I could recreate my productive streak for the coming weeks, I looked back on an entire month's worth of pre-planned items on a to-do list that wasn't even visited until just then. I swear that there wasn't even a single day on which I could have moved things around to go sit at my desk and say hello to you all. What I'm trying to say is, please accept this long, winding apology for being MIA for four weeks - it has taken up close to a quarter of my assigned wordcount for this blog post.

Now that I've built up my absence so much, I think it would only be fair to go into what actually happened while I was away.

My scheduled date to publish the next blog post was 27 Jan but on the 23rd, I returned home from work with the certain knowledge that I'd caught something. The next six days saw me battling and barely recovering from what was arguably the nastiest viral infection I'd ever encountered. I was shivering one minute and sweating buckets the next. And every time I started sweating (which, I assume, was when the fever broke), my body also broke out in hives. I remember being up at 3:30 am one morning, unable to fall asleep with all the freakishly vivid nightmares, cold sweats, and misery, and then looking down at my wrists to see them casually breaking out in hives. I didn't scratch them even once - they just showed up, hung out for a few hours, and disappeared in their own time. It was later that morning that Shane noticed the state of my sweaty, hivey back - a sight I'm glad I didn't have the energy to witness - and it got him so freaked out that he managed to get me an emergency appointment at the GP's on a Friday. Apparently, saying something along the lines of "my wife is dying" in a pitch high enough for dolphins to hear does the job.

Recovering from the constant fever and starting to get my strength back was one thing. Getting over the blocked sinuses, cough, and throat infection was a whole other ball game. It took me another two weeks to become myself again. But in those two weeks, I happened to host my in-laws in our home for the first time, make a quick weekend trip to London with them, and secretly shop, plan, and pack for Shane's birthday surprise (more on that coming soon).

When we heard from Shane's mum and dad that they were going to be visiting us in the second week of February, we were surprised and unsurprised in equal measure. Shane's as much his parents' son as I'm my parents' daughter. Nothing in my home ever happens without meticulous planning and nothing in theirs is ever planned. My in-laws have lived their entire lives hustling and taking risks, initially in order to survive and support their families but later just for the fun of it. So I can totally picture my mum-in-law waking up one January morning, looking at the calendar and realising that her youngest was about to turn a year older, and deciding that she wanted to see him in time for his birthday. Because why not? Because what on earth has ever stop that force of nature?

I know for a fact that within a few days of her having this thought, they got everything ready for a visa application and a little after that, they were here for one week.

It was a wonderful week between all the delicious food we ate at some of our favourite Edinburgh restaurants and the juciest late night stories they shared from when Shane was a wee boy. And while they took a walk down memory lane and reminisced about days begone, Grumpy Shane fruitlessly attempted to divert the attention from himself with sacrilegious comments like, "Remember that woman who was constantly mean to me when I was small? I'm glad she's dead" and "Remember that man who said McDonald's gave kids cancer? I took his kids to McDonald's that very evening and guess what? They didn't get cancer, just food poisoning".

The only unfortunate thing was that on such short notice, neither Shane nor I could take many days off of work. And in the days when he did take up the responsibility to show his parents around, this happened: 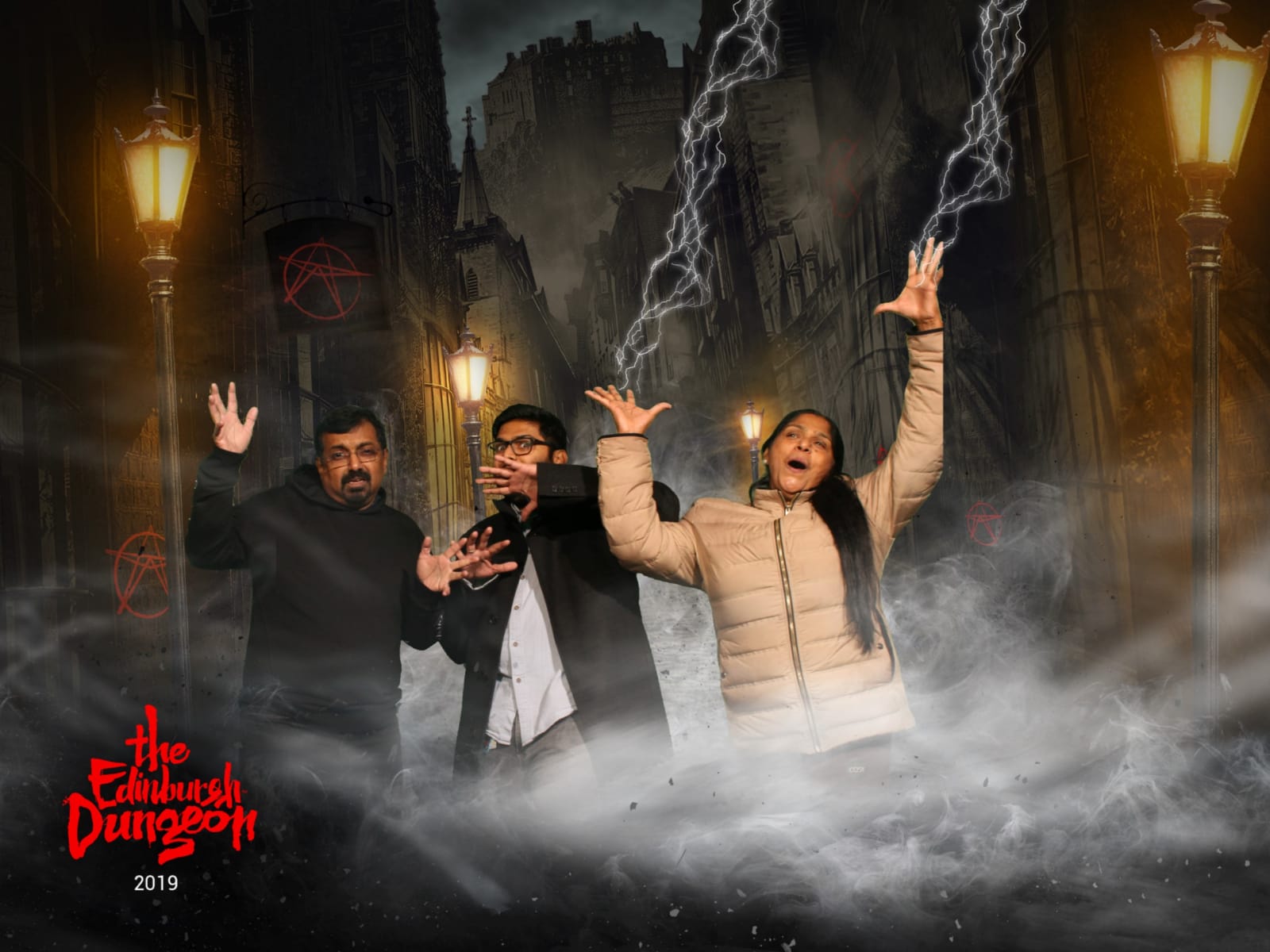 On the Friday after they landed, we all got on a flight to London to show them the capital city during the weekend. Shane would like me to point out here that this was never our idea, especially not his. That said, we were out an about on a beautiful sunny day, eating lush food and strolling along the Thames for the most part. It was all quite pleasant until we got to Buckingham Palace where my mum-in-law got pickpocketed and lost a very hefty sum of money in cash. Why such a sum was sitting in her purse while visiting some of the most touristy parts of the most populous city in Europe, we will never know. In the end, we comforted her by pointing out that she'd now had a "proper" London experience, just as she'd wanted when we started out. Too soon?

The next morning, we were lucky to be able to catch up with two of our lovely friends from the Beyond Our Horizons blog over giant pancakes and lovely cocktails. 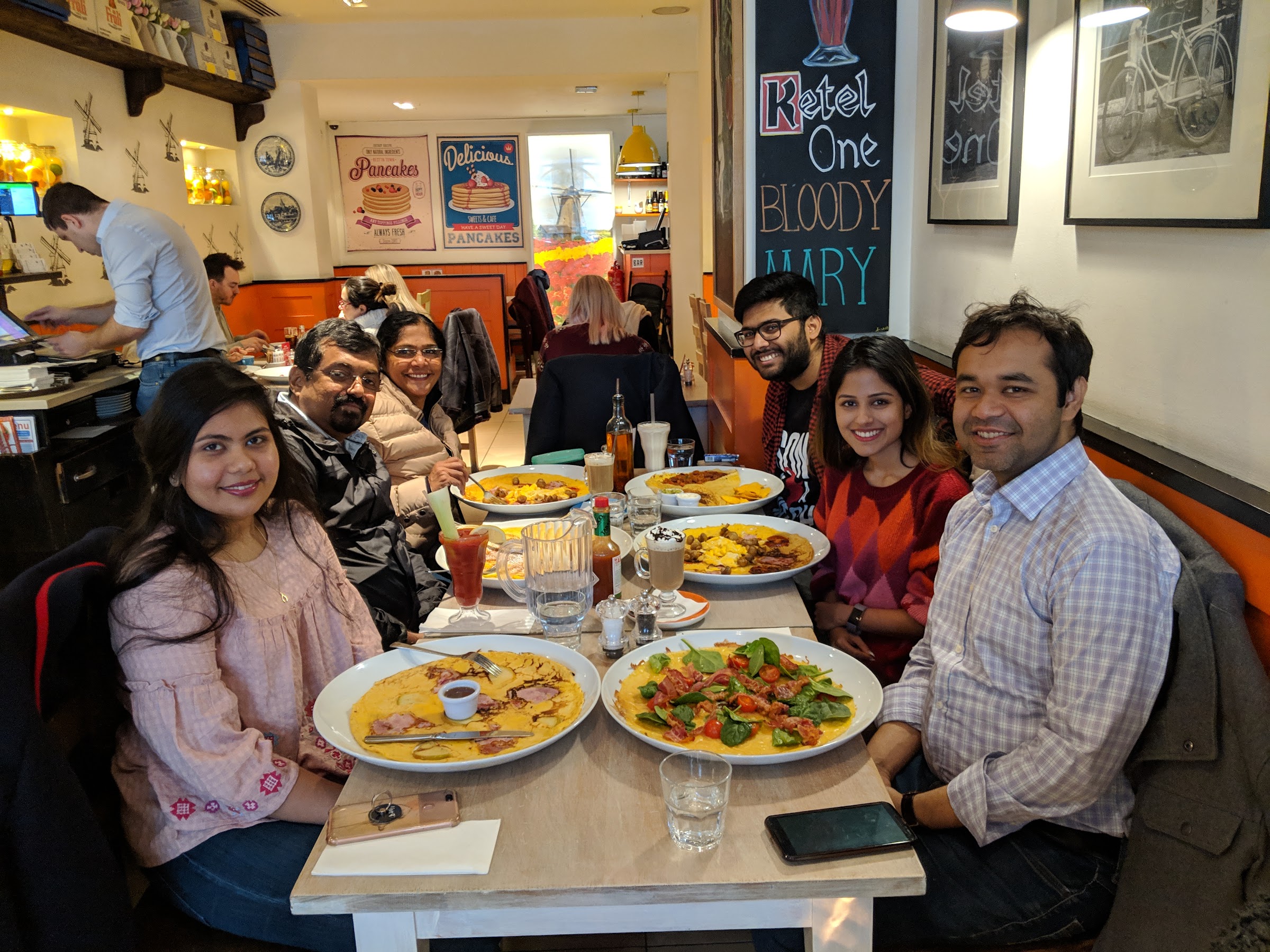 By then, my sinuses and cough had gotten a lot worse because I'd never really rested during my time of recovery. On my flight back to Edinburgh that evening, my entire face hurt and I couldn't stop the tears streaming down it. I'm glad that infection is behind me now because I must have atoned for at least three of the sins I've committed in my life during that flight.

While I bid farewell to everyone and flew to Edinburgh, Shane stayed with his parents for two more days to see them off on their journey back home. These two days with no one at home were my only window to properly prep for the ski trip I'd been planning for him for about three months. More on that in the next blog post :) But as of now, you're all caught up with 3/4 of the reasons why I'd been missing for a month.

Thanks as always for reading and do come back!