In exactly one month, by this time, I will be with my parents, getting ready to celebrate my dad's 60th birthday. And this sentence that you just read is what Meenal's always talking about when she says I'm weird. I get it from my mother who is notorious for either getting people all worked up and excited for something that's about to happen exactly a year/month/week/day from the present or for making everyone depressed by nostalgically reminiscing about something that happened exactly a year/month/week/day ago. I don't do it as well as she does but let's just say the apple hasn't fallen far from the tree.

So yesterday when my mum and I exclaimed, "Exactly a month left to board that flight to India" in unison, nothing was out of the ordinary. As the conversation progressed, a lot more of our similarities came to the surface because we both started planning for the event of my arrival. The only difference was that she was doing the planning out loud whereas I was making mental notes. By the time we hung up, we both ended up with long to-do lists although this time, mine were more physical in nature because I was writing things down as I spoke to her, whereas hers are probably still floating around in her head.

It's a happy-happy time for the Narayans! Shane, however, has expressed his blatant irritation with the list-making which is strange because he usually doesn't even notice these things. Maybe I'm a little extra...you know...cuckoo! this time around. He's made it explicitly clear to me that he wants to have nothing to do with me or my lists and that the most he will do is show up where he's required to. And by that, he means he will board the flight with me.

But I'm not going to let that kind of negativity get in the way of my list-making bliss. Like I said, it's a happy-happy time and nothing can take that away from me.

Although, something almost did yesterday. It was such a big deal that not only did Shane get actively involved, but he also panicked a little bit with me. And that's saying something.

Yesterday, after grabbing lunch with him, I decided to work from his office for the rest of the afternoon. And while I was sat there, I received an email that confirmed that I had said yes to something on a particular date which seemed a little off to me. Clearly, when I said yes, I was sure that I would be back from India by then. But with all the planning and list-making that happened in the morning, I wasn't so sure anymore. Moreover, we'd bought those flexible tickets where we can change dates without much of a fuss because Shane himself wasn't too sure about his work and holiday situation. So with the knowledge that I had the option of changing the dates around, I hopped over to my email to find the ticket confirmation. Usually, whenever we plan a holiday, whichever one of us books the tickets, sends it to the other so that we both have access to them in case something goes wrong. So it was a little strange that I couldn't find my tickets for this India trip, especially since we had booked them about seven months in advance.

This led me to drop a message to Shane, asking him to please check the date of our arrival and forward the ticket confirmation to me. A minute later, this happened: 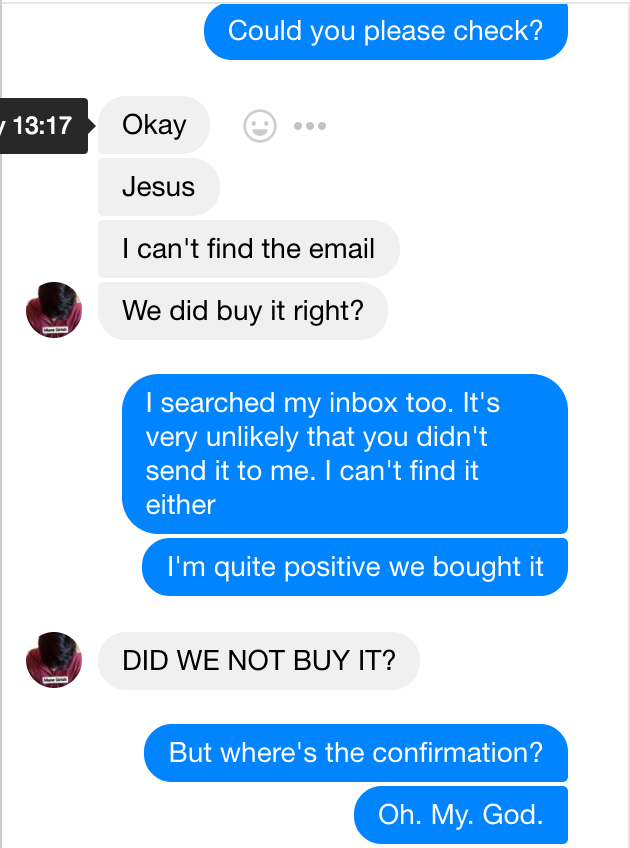 Soon, he was by my side and we were frantically going through all emails and bank statements. If we paid for the tickets (which I knew we did - I even remembered the exact amount), we would surely have something to show for it? But then, neither of us could remember which bank account we paid from. So we spent some more time sifting through a year's worth of bank statements from three separate accounts to find this bloody transaction.

We started breathing a bit more steadily once we identified the payment and reference number. All it took after that was a login-screenshot-email-and-print for us to calm the fuck down. Once we could think straight, we realised that the worst that could have happened in case we had not bought the tickets is that we'd spend an extra £100 per person for the exact same tickets, which I agree is wasteful and avoidable but certainly not the end of the world. However, had we found out that we had in fact paid for the tickets but still couldn't log in and find the tickets, it would have been a whole other ball game. Either way, those 30 minutes of post-lunch panic weren't pleasant in the least. Like I said, it almost took away my list-making happiness.

So here we are! We still have no idea what happened and it's super-weird that neither of us could find a booking confirmation. We can't believe we didn't realise this at the time when we booked the tickets. I guess we were a lot more laid back considering this wasn't something we had to worry about for seven more months but boy, was that not fun. So for any of you who are planning trips way in advance, here's a small tip: Always, always ensure that you have a copy of your ticket confirmation stored away somewhere, even if you don't feel the need to bother just yet. Be ye not so stoopid!

On that note, I hope you have a brilliant weekend where you do whatever makes you happy. As for me, you guessed it - there are many more lists to come! Huzzah!