Conversation in this household has to be very carefully manufactured sometimes. I tend to be someone who enjoys oversharing (if that wasn't obvious by the very existence of this blog) and Shane mostly tends to marinate his thoughts for ages before deciding to share them. I guess one thing that makes me so interested in him is the fact that I haven't figured out a way into his head yet. In fact, it wouldn't be wrong to say that I haven't fully figured him out in almost six years of being with him and close to two years of being married to him. I don't know what I'd do once the figuring out finally happens because life as I know it would be over.

The fear of losing normalcy in my life, however, has never stopped me from throwing all caution to the wind and constantly pestering him to tell me what he's thinking. 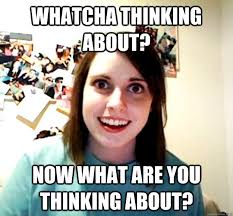 I think that, to him, this tendency of mine might be on the list of top 10 things I do that make him want to poke a wet finger up my nose in my sleep.

I've lost count of the number of times he's hugged me in my sleep, only to have woken me up to the sensation of his eyelashes brushing against my earlobe as he blinked away to oblivion - never sleeping, always thinking. It's in times like these that I become even more rash and start asking him questions he never wants to give answers to. Because the only other alternative would be to grab him by the eyelashes and smack him on the ground a couple of times.

"What are you thinking?"

"It can't be nothing, you're still up and I can almost hear you think. What are you thinking?"

"But I want to know what's going on in your head!"

"Stop. It's nothing. I respect your quiet time, so you need to respect mine"

"But I never have quiet ti-"

"Yeah, I know. But I still respect it. And you have to do the same."

*After exactly 120 seconds of silence*

"So, what about the unicorns?"

"I respected your quiet time for two whole minutes. I even counted. It's harder than I thought."

Soon after that, I fell asleep again and forgot all about it till he gave me the stink eye in the morning. That look was telling and reminded me of a weird sensation...of maybe a wet finger up my nostril in my sleep.

Is it a CRIME to be inquisitive?