I hope my exorcist hands in the post image were appropriate in the spirit of Halloween. If not, check this out:

If my weird zombie walk in the gif above was still not scary enough, worry not. For Halloween this year, 22 Nelson Street wishes to present a braindump. Just for horror. 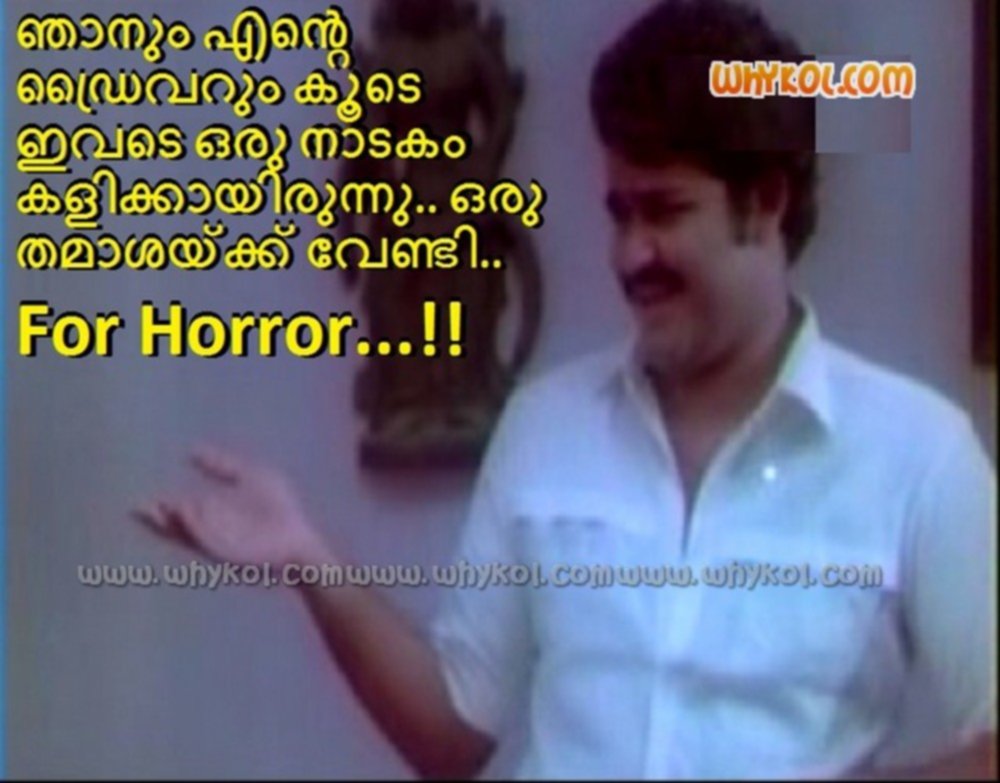 Most of you won't get why I've been laughing like a maniac while typing that last sentence out because most of you are not Malayalis. But this morning, I woke up feeling like a proud Mallu.

I yam ae Malayali. I wear a ping lungee.
My chappals are Bata and you can kol me Chetaaaa. And I yam vaery sexyyy.

Trust me when I say this: For all our faults, we Mallus are some of the most humorous people on the planet who produce some of the best movies in the world. And sometimes even unintentionally, our ungles and andies do the most hilarious things you can imagine.

Let's take my mother for example. No, I think my mother's friend is the hero in this story. One day back when my mother was still in college, she decided to visit one of her friends very early in the morning, just for horror. This friend of hers lived in a traditional Kerala home complete with a well and a big backyard. If you're not already familiar with this, I should explain that back in the day, most homes in Kerala came with their own wells and most people bathed and cleaned themselves by these wells. So it was also a common practice for many to brush their teeth close to this well, while also squeezing in a tiny morning stroll in the backyard, getting in tune with nature etc.

So when my mother arrived at her friend's home, she walked in on her brushing her teeth by her well. The minute this friend saw my mom, she intended to spit out what was in her mouth in order to greet my mom. Instead, she flung her toothbrush away from her and swallowed what was in her mouth. I need you to go back and read that last sentence once again and picture what happened. Now tell me, how adorable is that?

It's like the time my mom said, "My tholder hurts". Because 'shoulder' in Malayalam is 'thol' so why not just mix it all together and swallow some toothpasty yuckiness while you're at it? Just for horror.

Wait, I'm not done yet. I yam on fayarr today. Here's one more andie story for you. One of my close friends had a neighbor who owned a mini farm. She had a cow and a few goats and even some cutesy little chicken. One morning, this neighbor lady walked up to my friend's house with a tumbler full of fresh cow's milk. That's another thing about back home. As far as I remember, people were very friendly in their own little circles most of the time, and neighbors often share food. In fact, till date, I'm aware of how my parents and a few of our neighbors send over a few dishes to each other from time to time. Just for horror.

Coming back to the story, my friend's dad opened the door and graciously accepted this gift of fresh cow's milk. And while he was at the door chatting with this friendly neighbor, his wife (my friend's mother) also joined him and slowly took the tumbler from him after profusely thanking her neighbor for the milk. And because these people have known each other all their lives, they decided to continue standing at the door, catching up. But a few minutes into catching up, my friend's dad saw from the corner of his eye that his wife was exhibiting a slightly peculiar behavior. She was deeply engrossed in the conversation and was holding the tumbler of milk with one hand. But her other hand was now in the milk and she was carelessly swishing it around in the tumbler. And before he could even say "Thang" of Thangom (which I wish was her name so that I could perfectly fit it with this movie reference I have stuck in my head), she poured out all of that milk to the base of a coconut tree in her yard...as one does. Both the neighbor and this poor ungle looked at our andie in astonishment. Andie looked at them like, "Whatchyu lookin' at, bruh?" and followed their gaze to the base of the coconut tree. Immediately after that, she was heard saying, "Duuuuude! I totz forgot that it was milk yo! I thought that be water". No, seriously. She may not have articulated those exact words but she actually forgot that the tumbler contained milk. She thought it was water, and that too waste water that had to be hurled to the base of a coconut tree. Because why not?

Speaking of coconut trees, you might already be aware that Kerala is the land of coconut trees. In fact, the name Kerala literally means 'land of coconut trees'. So it shouldn't come as a surprise that we use coconuts and coconut oil in everything. I remember this Mallu kid who frowned upon his mother for using coconut oil to fry him an omelette. This was when kids in India had just started discovering Youtube and were getting enamoured by everything American. "So what do you fry your eggs in?", I asked him because deep down I yam ae Malayali and I would eat anything cooked in coconut oil any day. "DUH. Olive oil", he said and I was like -_-

Honestly, if that Mallu kid were to see me today and find out what I've been doing for the past couple of weeks, he'd totally barf in my face. Here's the deal. I used to be one of those people who took extreme care of my skin. From the time I was a teenager, I've always had a proper night time skin care regimen in place where I'd meticulously cleanse, tone and moisturize my face. I've done this forever, and I've nailed it over time. When people compliment me for good skin, I usually never hesitate to take credit where it's due. Yes, I was blessed with genetically uncomplicated skin as I never went through even a teenage break-out phase and I usually don't break out even around the time of my period. The only break-outs I have ever had to encounter were on my chin area courtesy of what I later learned was stress. And since I've never been one to take anything for granted (even things that were generously bestowed upon me by - please continue reading the rest of this post while I struggle to come up with a noun to use here), I've always cared for my skin. But as you know, the past couple of months have been extremely busy for me. There were a lot of sleepless nights and on most of these nights, saying that I slacked would be an understatement. You might remember that there were even some occasions when I forgot to shower for more than a day. Shit happens but I've learned my lesson.

Fortunately, my skin didn't get to a point beyond repair and I somehow escaped all the pimples that tend to come with clogged pores. However, what I did experience was extreme dryness. With the weather getting progressively colder here in Scotland and especially with the winds that threaten to blow me off the coast, my skin began to get visibly and embarrassingly dry in patches. It got so bad that even getting myself on track with moisturizing my skin twice a day didn't seem to be helping. So I went back to my Mallu roots and picked up some good quality organic coconut oil and started mixing it with my regular day and night moisturizers. Just for horror. But I shit you not, the dryness disappeared in two days. TWO DAYS!

This is now my favorite life hack which I will be passing on to my children and grandchildren some day. When I was really young, every three days, my mom would spread coconut oil over my entire body and bathe me later. She also used to apply a mixture of curd and turmeric all over my body once a week. One my dad's favorite stories is that of how every time my mom slathered me in this bright yellow mixture, he'd return home from work to find a tiny yellow bum-print on some discreet corner of the house because I'd purposely sneak off to leave my mark on the walls of our rented home. I think that to a large extent I have my mother to thank for all the pimple and skin problems I escaped growing up. And going back to mallu coconut wisdom once again saved my skin. Literally.

So yeah, if you're facing any kinds of problems in life, think like a Mallu. Wear Bata chappals and ping lungis but more importantly, use coconut oil. 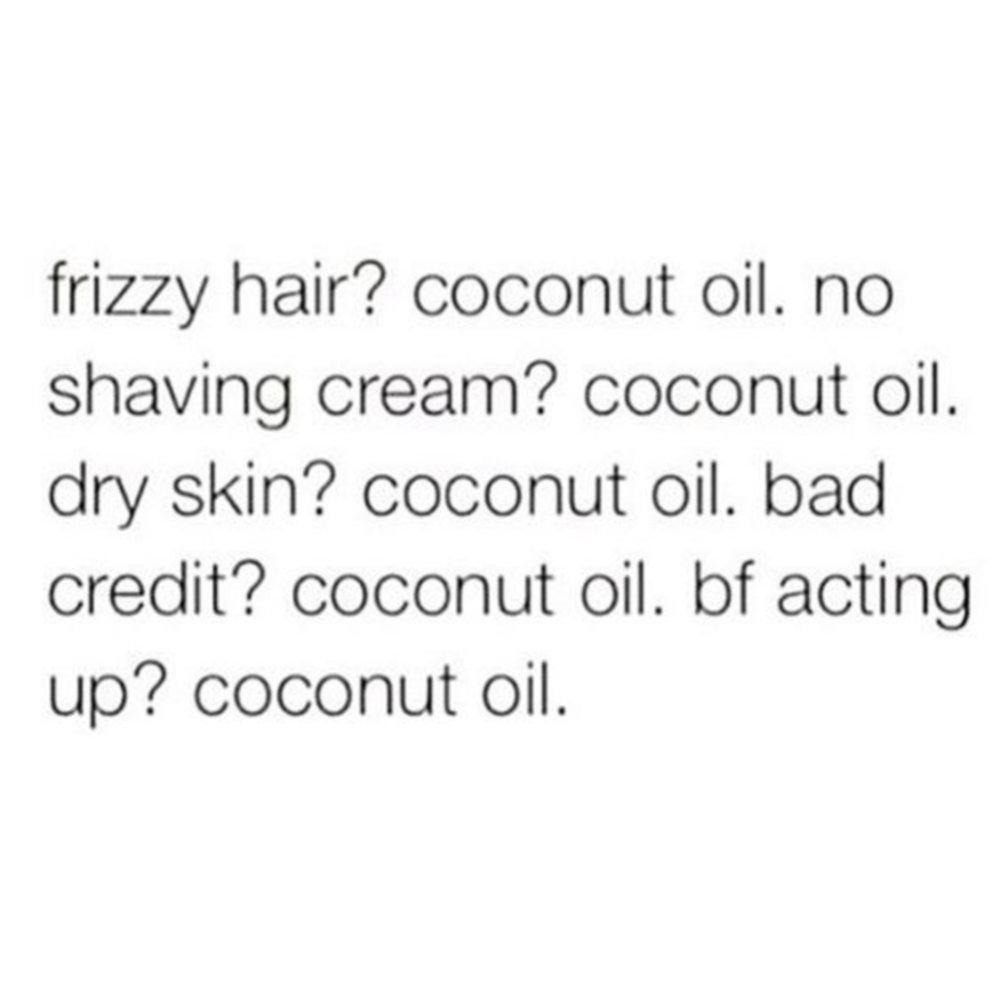 I hope you all have a wosum week ahead!