Yesterday was a sloth day. Usually, something has to go wrong for me to get into sloth mode but yesterday, there was no reason whatsoever to feel this shit. And the worst part is, it was the worst episode ever. I don't remember a single time when it was this bad. To help myself cope, I tried doing the opposite of my usual sloth routine. I got up, showered, got dressed, did the laundry, sat down to work, and then gave up.

I hadn't been able to talk to my parents all day because my mother sat on her spectacles and broke them. And while they were out getting her a new set, they also went on a date a watched a movie because why not? So I called up my second best panic control person - Meenal. Unfortunately, she was in panic mode herself and two panic-stricken individuals should never be allowed to talk to each other. My last resort was The Husband. I never call him at work usually because I know that I don't like getting calls when I'm getting shit done, and I like to maintain a respectful distance when people are at work. But this was almost an extreme case scenario so I called him to let him know that things were not looking so great. As expected, that only made me feel like I was intruding. I just want to make it clear that I in no way blame the people in my life for how things were looking. It was just one of those days and I'm the first person to advocate against having expectations from people. Not because they will fail you, but because they genuinely cannot help you sometimes and that's perfectly normal. I didn't feel resentful in the least. Just miserable for no tangible reason.

Then, I got into sloth mode. By 4 p.m , I was curled up on the couch with a pillow, a glass of wine and a plate of smoked cheese. That was "lunch". I had the 9th season of Big Bang Theory playing on TV and I don't even like that show. In less than 2 hours, The Husband came home. He moved my blanket covered feet a little bit to squeeze his bum into the space next to me on the couch. He didn't complain even once about the show that was playing on TV despite the fact that he always feels compelled to leave the room whenever I watch it. With my feet on his lap, he bent to his side to hug the little blanket-robed Yoda person that was lying motionless next to him. And then he asked, "Who's the prettiest girl in the world?"

"I mean that you have princess privileges for a month."

"Is it because this is my birthday month?", I raised my head to ask him.

"Of course. That, and because you're having a bad day. You can be the prettiest princess all you want".

Last night, we ordered Chinese food, cuddled up in our red throw blanket and watched Shrek. I was Princess Fiona and he was Shrek (usually he demands to be the princess but this is MY month). We were two imperfect people harbouring insecurities and wondering how one could ever love the other. But being imperfect never means that you can't have your happy ending.

P.S I just noticed how right after the video finishes playing, my parents do the Indian version of the facepalm: 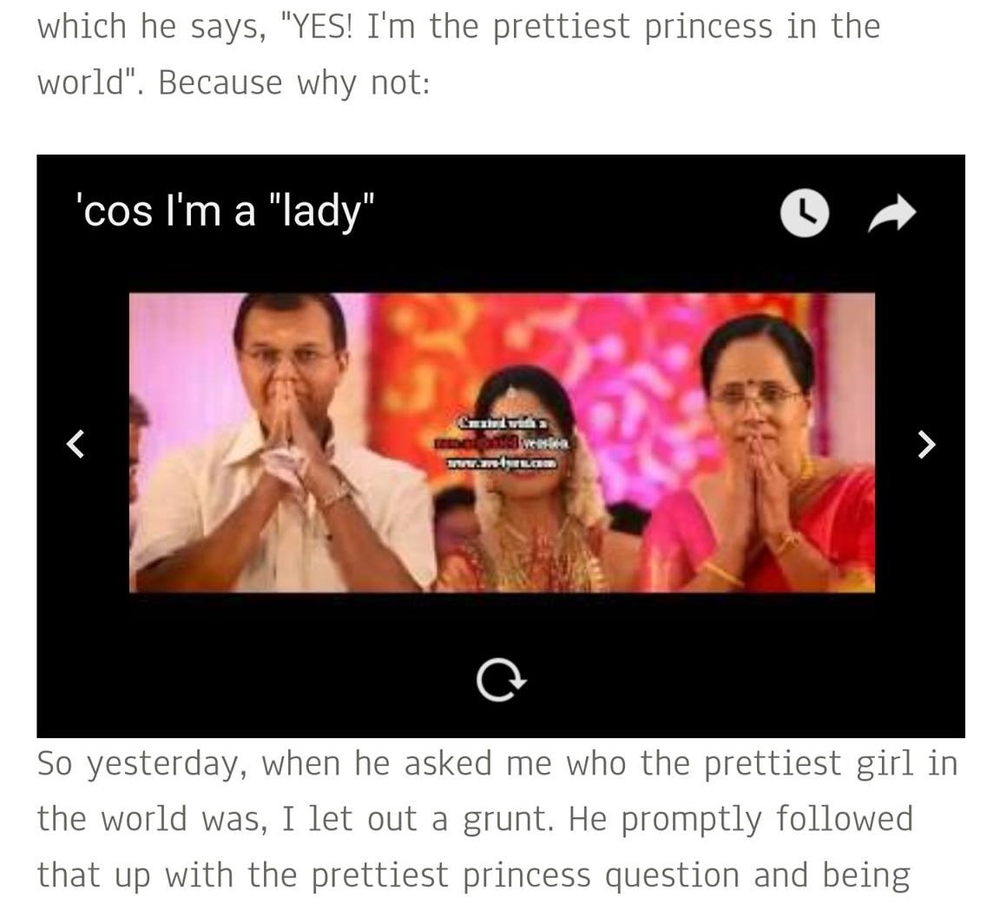 We are truly very proud of Lady Shane.