By popular and incessant demand, Shane's back. That's right, your effortlessly cool superhero is back.

Yeh, no. There was no demand. Nobody cares. And I'm not cool, just very hot if we're all going to believe everything Ankita writes here anyway. But I am back. Because I have something to say and I intend to do it publicly like all the annoyingly over-sharing bloggers - again, looking at Ankita.

So, it all begins with this phrase I hear a lot from my close friends - 'Oh my God, he pulled a Shane again!', which I am to understand is meant to be negative, but I consider it high praise. So, every time something goes wrong in my life - usually stemming from my big-headedness or downright stupidity - things usually end up working out at the VERY LAST SECOND, sometimes even better than I could have hoped for. That capitalized bit is important though.

While the origins of the phrase are in my relative success in surviving University without having attended a single lecture, it grew wings as time passed and was iconically used when I found a job in my favourite city a day before I was leaving the country due to my student visa expiring. The story I intend to tell you about though, is about something new.

As with all drama in my life, it starts with my wife. And her friends. And their plans. And in this particular case - their plan to go chill in the south of France. I'm sure for a good portion of you, the plan seems perfectly reasonable, but the folks without first-world passports can feel my pain when I say that visa applications - to simply cross the English Channel and enter mainland Europe - are not fun.

And because they're not fun, my wife planned ahead and got the earliest appointment we could to apply for the visa way ahead of the trip. I was secretly thinking of how responsible and "adulty" we were being by planning ahead, when in a monumental act of carelessness during a stressful time, I misplaced my passport in a hotel room in London the very night before the visa application appointment. Which meant that I missed it, but Ankita still managed to apply. This ordinarily would not have been so bad because I managed to get my passport the very next day, a couple of hours after the appointment. So, I could just reschedule while Ankita received her passport with a one year visa stamped in it about two weeks after the appointment.

Except, the next appointment I could book was a mere 7 days before our flight to Nice. And the French consulate requires that visitors apply at least 15 working days before the flight. So, with a false promise to my wife that my visa would arrive a day after she was in France and that I would join her in France a bit late, I applied anyway thinking that I should do as little damage to her well-deserved holiday as I could, with the expectation that I'd deal with her angry fallout once she was back from her holiday.

Except, luck intervened two days before the flight and I got an email from the French embassy saying that my application had been processed and my passport returned to me via courier. Hooray, and we live happily ever after! But NOPE - this doesn't meet the bar for "pulling a Shane" yet.

As you may have already guessed, luck intervened again. Bad luck, this time. The courier company "failed to deliver" my passport the day before the flight according to their website even though I was at home waiting for the delivery - with no doorbell, phone call, or SMS. So, I called them up and asked them how I could finally get my hands on my passport and they told me that my passport was in a depot about an hour away from our home and that I could go pick it up if it was an emergency. At this point, I was really intrigued as to how my passport that they had "failed to deliver" on that day was somehow already in a depot an hour away from me by car. But I bit my tongue and decided it was not worth risking them turning hostile and my wife killing me in my sleep simply because I couldn't keep my mouth shut.

I realized that I was tight for time, as their depot was due to close at 6 pm and it was already late noon. So, I powered through a quick shower and caught a cab to their depot. On the long ride there, I realized that the ridiculous amount of money and effort I had already spent on this visa without including the taxi ride I was taking now, doesn't account to much because there's no guarantee that I have a visa. That's right - the French embassy just processed my application, it doesn't mean that I qualified for the visa. That's just how it works - you book your flights and accommodation, and show proof of these as well as of a steady income being deposited into your bank account for the past three months, and that only accounts for your application. They could still not give you the visa because the money you lose in the process is not really their problem now, is it?

Right then, the thought that I might be about to open my passport without the visa stamped in it hit me like a brick to my face. WHHHOOOOOOOSH! And as I sat there listening to my cab driver explaining how Uber was treating him like a slave, this thought of not getting the visa just seemed funny.

That's probably why I wasn't too phased when the lady at the courier depot told me that they didn't have my passport as the depot that deals with passports was a different one farther away. I still had a spring in my step as I left the depot. I even stopped to grab a packet of crisps from their employee vending machine before I walked out with a grin on my face. I was, for some inexplicable reason, in a great mood.

My cab driver happily agreed to my deal where he would end the Uber ride and I would pay him directly without a cut going to Uber and he'd take me to the new depot and back home. I'm fairly certain he must have thought I was a glutton for punishment as I explained what had just happened at the courier depot with a grin on my face. It didn't matter. Somehow, I knew that somewhere, the wheels of fate were in motion and no matter how this day ended, I'd be okay and to top it off, I'd have yet another hilarious story to tell about how much of an irresponsible dumb fuck I am.

Just like a shitty plot from a TV soap, the drama intensified. IT LOOKED LIKE THERE WAS NO ONE AT THE NEW DEPOT. Stifling giggles, I kept ringing the intercom. An excruciatingly boring couple of minutes later, a woman answered my ringing. I still can't believe what happened next. I literally had to repeat my name and spell it 6 times to this woman. 6 TIMES. After which she told me she was sure that she didn't have my passport there. After a bit of back and forth about how I was on a call about the missed delivery and was asked to come in and pick up my passport directly, she buzzed me in.

I sat in the empty waiting room as, I'm guessing, she came walking from some other part of the industrial complex that we were in. We talked for a few minutes, most of it spent by her explaining to me how sure she was that my passport wasn't there at the depot. But I genuinely can't remember much about her or the conversation except for the fact that she had these long bedazzled nails that she used to manually scroll through a piece of paper she was carrying with a list of packages at the depot.

The conversation ended with me asking the nice lady with the long nails to forget about that list for a second and to kindly look for my passport in the back room again. It was closer to 6pm now, and it looked like there wasn't much else I could do anyway. I don't know how long I sat there waiting for her to come back with the bad news, but boy, it felt like hours. And that's when luck intervened one final time, and she came back from the back room with my package in hand.

I think any normal person would have ripped open that package immediately to check for the visa in the passport but we have already established that I'm a dumb fuck. So, I skipped back out of there with a wave and a wider smile on my face. I then jumped into the cab back home and texted my wife telling her that I was holding the passport in my hands. And like an adult who realizes that I shouldn't be trusted with anything important, she asked after the visa. That's when I finally open up my passport and saw the stamp in there so I proceeded to send a photo of it to her as proof. And you'd think that the story ends right there because if anything, this should count as "pulling a Shane". This was it!

But nope. It ends with a very confusing response from my wife. Two words - "Fuck off". 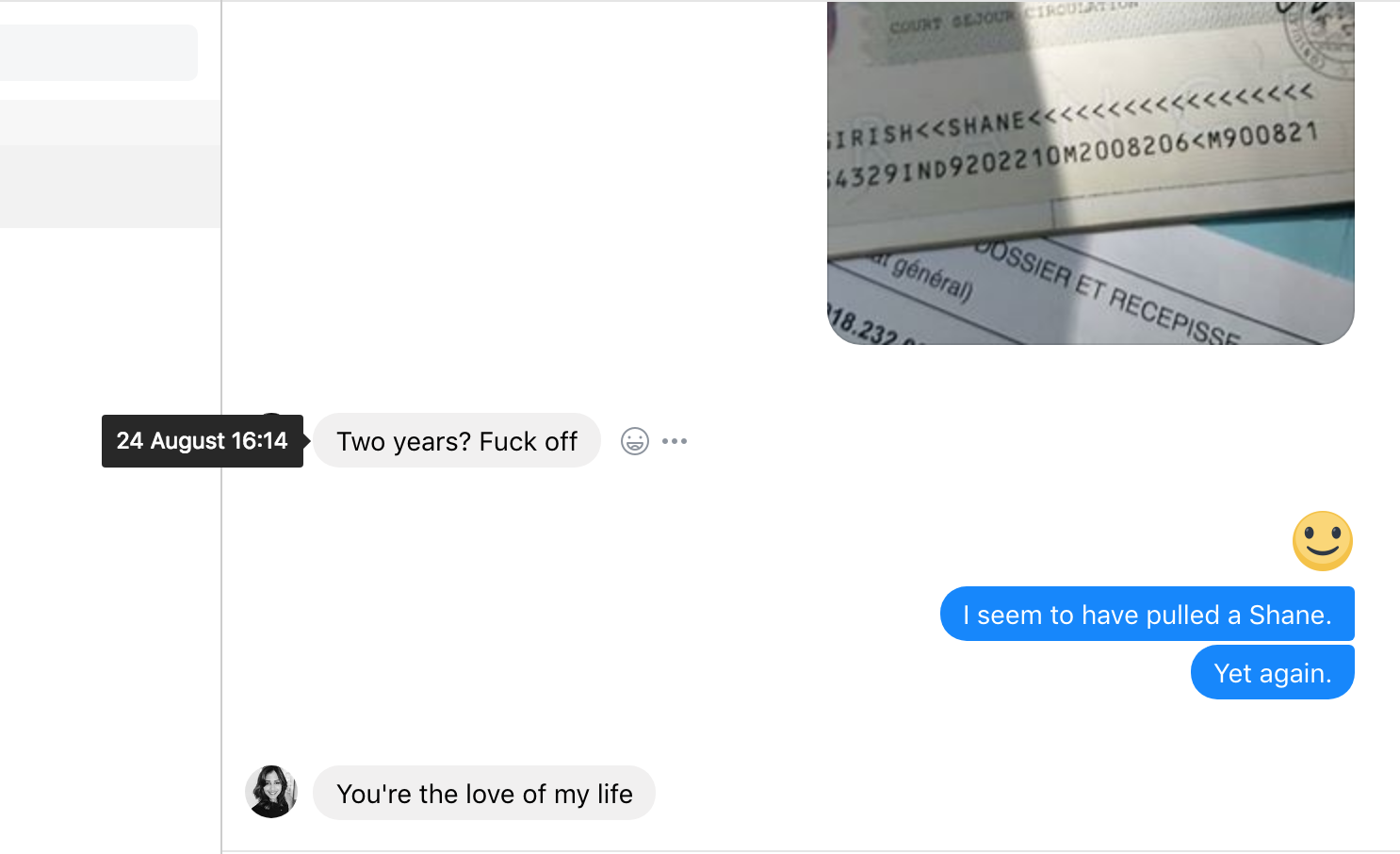 Because she had noticed something in my visa that I hadn't. As it turns out, even though I had screwed up colossally and a multitude of things had gone wrong, I had somehow managed to get a two-year visa while she only got one year.

And that, my friends, is the story of how I "pulled a Shane" once again :)

For photos from the south of France, visit Ankita's Instagram and for stories, visit her Instagram Story Highlight titled 'France'.

Software developer by day. And night.