I don't know how to begin writing this post because I'm still shaking from the excitement I felt two weeks ago when I...

I was eighteen. A first year English Literature student who had just manipulated everything in her life to be in a position to sit around reading books, not just because she wanted to but because it was required of her. Life was perfect.

I have loved every second of being a literature student for five years of my life, even when things went terribly wrong from time to time. I loved the books that were prescribed in the syllabus, the extra reading I did because I wanted to, the lectures I got to sit in where some of the most amazing teachers in the world talked about topics they were passionate about, and even the most horribly boring, monotonous lectures I had to sit through where a professor would hide her face behind a book and read the contents out loud for a whole hour. The boring lectures were, in fact, the highlight of my years as a student because they gave me the opportunity to sit on the first bench and read a book of my choice, right under the teacher's nose. Nobody suspects timid looking first-benchers although we're the ones who get to most of the mischief. But I digress.

I was eighteen and newly introduced to this magical world where I was, like I said, expected to read and analyze beautiful works of literature. One day, our class teacher told us that a prominent writer would be visiting our college to deliver a lecture. We were all expected to assemble in the seminar hall to listen to her talk about her books, literature, and writing. I had heard of Jaishree Misra but hadn't read even a single one of her books. Nonetheless, I joined the rest of my classmates in this seminar hall, armed with my little notebook and pen to take notes from this writer I knew nothing about. As far as I was concerned, she was a published author and I'd definitely have something to take away from her lecture.

Before I get to the next part, I need to state this:

I'm not a hero-worshipper. I have no heroes, not really. I never had a role model growing up. In fact, that stupid question during essay writing competitions - 'Write about your role-model' - is still anxiety inducing because I wouldn't know what the hell to write about. The only person I ever aspired to become was the best version of myself. I had a very confused childhood but this tiny detail was always crystal clear to me. I wanted to be no one but the very best version of me. A little self-indulgent, I agree, but when have I ever been anything but?

Jaishree Misra sat tall on the dais, clad in a white sleeveless kurti, with an air of dignity, calm and self-confidence around her as she was being introduced to the gathering by one of my teachers. Soon after that, she took to the mic and started addressing us. I sat there with my little notebook and pen but I didn't take down even a single word of what she said. That would require me to look away from her and miss out on what she was saying while I tried to jot things down. I sat there having the biggest woman-crush of my life.

Soon after she was done speaking, we were told that she was open to answering our questions and I slumped into my chair. I didn't want her to even see me then, the pleb that I was. But as soon as I heard that she was going to spend a few more minutes in the seminar hall signing copies of her book, I ran out and bought one for myself. I stood in line and timidly told her my name as she signed my copy of Ancient Promises. 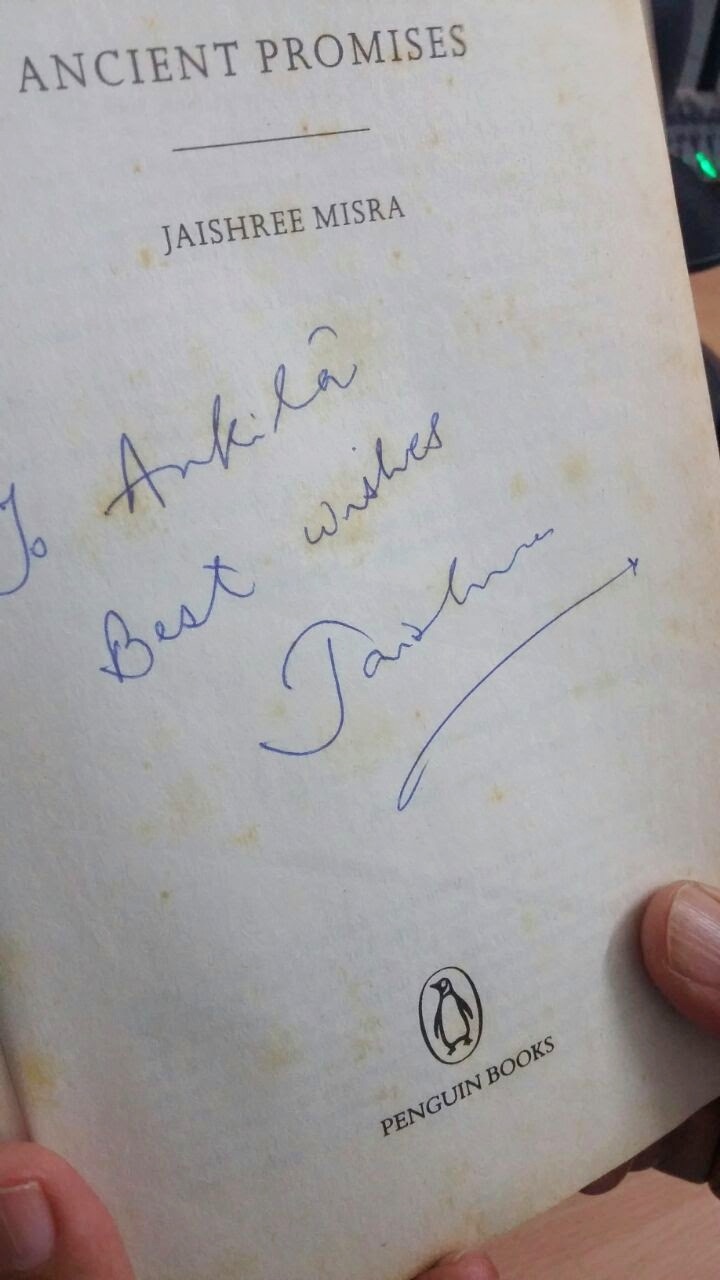 And thus, her semi-autobiographical work of art came to be in my possession.

I started reading it that very evening and initially, I couldn't believe my eyes. It was like she had stalked me over the years and shared my story in her novel. An only child, daughter of an Air Force officer, living in Delhi, traveling to Kerala during summer holidays. And the best part? The protagonist's boyfriend's name was my first boyfriend's name. I was even dating him at the time when I read that book.

As soon as I was done reading Ancient Promises, I picked up another best-seller of hers - Rani. It was based on the life of Rani Lakshmibai of Jhansi and I fell head over heels in love with this book. So much so, that I based my BA final year project on this very book.

In the meantime, I kept trying my best to get my hands on as many books by her as possible. In 2012, during my final year of MA, I would see the bright pink cover of her Accidents like Love and Marriage in my college library and beg the librarian to let me borrow it. It hasn't been entered into the system yet, she would say. I'd have to be patient, she'd say. I never got to borrow it.

Later in 2014, when I was in a bookstore with my then future brother-in-law, he offered to buy me any book of my choice as a little present for agreeing to marry his weird little brother. My eyes landed on Secrets and Lies by Misra and there was no looking back.

In 2015, as I got ready to leave India to start my newly married life in the UK, I packed my bags very meticulously. But somehow, I forgot to take into consideration the fact that I'd be on a flight for thirteen hours without a book. The book that I picked out for myself from the airport book store was Afterwards by this amazing woman who'd grown to be a sort of extension of myself over the years.

I had to tell you all this because somehow it's important to me that anyone who listens to this episode is aware of how crucial this interview has been to me. Jaishree Misra, to me, is not just another author who wrote just another book. My virtual relationship with her, although unbeknown to her, has been built over almost a decade. And with each book, interview, and media appearance, I have grown to adore her more and more.

Anyone who has read Ancient Promises already knows by virtue of its semi-autobiographical nature how Jaishree has shown immense bravery in her life. Leaving behind an unhappy arranged marriage to make a life for herself and her child with special needs by getting a masters degree and landing a prestigious scholarship to leave India are all just at the tip of the iceberg. In this interview, we managed to go into a lot of detail, honest details, about what it was like to get to where she is today.

I remember when it was announced that she was open to answering our questions after the seminar in my college, my teachers strictly warned us to not ask her about her personal life. Not that I had the confidence to open my mouth in her presence anyway, but to think that seven years later, I sat down and had a ninety-minute conversation with her! My life has sort of come full circle.

And do you want to know what I'm going to cherish forever? When I told her about my final year project on her book Rani and what it entailed, she said:

You're a very good reader, I must say. I should be very grateful to readers like you 'cos you describe [my books] almost better than I could.

I'm going to blow that up and frame it to show my future offspring.